The title of this article is ambiguous. Further meanings are listed under Earl (disambiguation) . 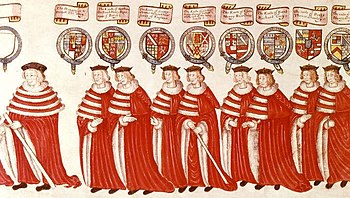 The royal procession to Parliament at Westminster, February 4, 1512; v. l. To the right: An unknown Marquess, the Marquess of Dorset , Earl of Northumberland , Earl of Surrey , Earl of Shrewsbury , Earl of Essex , Earl of Kent , Earl of Derby and Earl of Wiltshire . From: Parliament Procession Roll of 1512 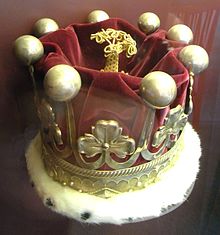 Earl of Devon's crown , which he wore at the coronation of Elizabeth II . 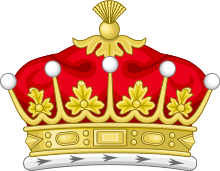 Heraldic crown of rank of an earl

Earl ( br. [ Ɜ: ɫ ], am. [ Ɜrɫ ]) is a British title of nobility that corresponds to the German count . Counts outside the British Isles are called "Count" in English. The feminine form of Earl - as well as Count - is "Countess".

The term Earl originates from the Danish Jarl and has been adopted since the conquest of England by the Anglo-Scandinavian King Canute in 1016 instead of the Saxon Ealdorman , which had been in use until then . Up to the middle of the 14th century it was the highest level of the English nobility. In Scotland, the title Mormaer developed into the national equivalent of earl .

After the Norman conquest of England under William the Conqueror in 1066, earls actually only had the rank of counts . When Edward III. In 1337 his son Edward of Woodstock , the so-called "Black Prince", was appointed Duke of Cornwall, the title of earl sank to the second and, when Richard II raised Robert de Vere to Marquess of Dublin in 1385 , to the third.

Nowadays the title Earl is purely a professional distinction with no relation to territorial violence. Just like the Viscount and the Baron , the Earl is to be styled with the addition “ The Right Honorable ” and addressed with “My Lord” ( adressed ).

The crown of rank of an earl consists of a headband set with precious stones , on which there are sixteen golden prongs, which are alternately set with golden strawberry leaves and silver pearls. The eight pearl teeth are four times higher than the leaf teeth. A scarlet hat is surrounded by the prongs and the crown looks tall and full. The golden headband is trimmed with ermine . The parliamentary coat is scarlet and has a triple ermine trim. The heraldic crown of rank of the Earls is limited to the stylized side view of the crown with visible four leaf and five pearl prongs and with a tassel on the cap.