Bloomberg Television is an international news group specializing in economic and financial topics. It is operated by Michael Bloomberg's Bloomberg LP company.

On August 1, 1997, Bloomberg LP received approval from the Hessian State Authority for Private Broadcasting to broadcast its German-language program nationwide. On March 9, 2009 the German language program was discontinued. The editor-in-chief of the German branch was most recently Wilhelm Kötting . 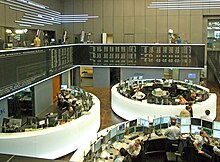 Among other things, topics were discussed with financial experts in panel discussions. Well-known Bloomberg presenters such as Philipp Encz and Andreas Scholz conducted programs such as Chefsache , Seitenweise Wirtschaft or Bloomberg Exklusiv . Another well-known moderator was Susanne Schmidt , the daughter of the former Chancellor Helmut Schmidt . The moderator team also included Richard Weiß, Wilhelm Kötting, Judith Bogner and Melanie Kösser.

When the transmitter started the program, the image was still divided into several segments. At the top left was the actual television picture, at the bottom and right stock prices, index data, stock charts and news were displayed. This "multiscreen" was gradually changed to a full screen with treadmills - as is common with other news channels. In August 2007, the design was exchanged in the United States and then in November at the British branch. In Germany, the changeover took place on January 21, 2008.

Discontinuation of the international branches

According to media reports from February 2009, all offshoots of the US news channel that do not broadcast in English should cease broadcasting in 2009. On March 9, 2009, the independent branches in Germany, France, Italy and Spain were discontinued. Since then, the respective station Bloomberg Europe has been broadcast as a pan-European feed on the previous frequencies , which broadcasts relevant information for the European market in the treadmill and during commercial breaks as part of the globally broadcast programs. The British offshoot still exists in that the advertising time continues to be marketed separately; Apart from that, there are no deviations in content from Bloomberg Europe .

Bloomberg Japan's television service was shut down on April 30, 2009; the frequencies were taken over by Bloomberg Asia-Pacific , based in Hong Kong. Brazil and Latin America are now also supplied with the global program; however, the treadmills and commercial breaks will continue to be in Spanish.

Since then, foreign-language offshoots have been contested exclusively in cooperation with local companies. There is an offer for the Turkish market with Bloomberg Habertürk and an Indian program with Bloomberg UTV . In Japan Bloomberg cooperates with the broadcasters Fuji Television and Tokyo Broadcasting System and produces individual program segments. Comprehensive information is also available on the Internet for these markets. For Mongolia , another offshoot called Bloomberg TV Mongolia was set up in cooperation with the Trade & Development Bank of Mongolia , which began broadcasting in April 2012.

The weekday real-time information program is broadcast worldwide - with exceptions. From the point of view of European viewers, the programs from Hong Kong are broadcast in the early morning program, those from London in the morning and noon, and the formats from the media group's headquarters in New York City in the afternoon and evening. In order to be able to show the daily events in their respective region more comprehensively, the offshoots can temporarily withdraw from the global program, which happens for example at noon and in the evening in Europe or in the evening in the United States , where in prime time there is increasingly no reporting from Asia - in favor further American formats - more is done.

Bloomberg Europe complements the weekend program with accompanying economic, financial, discussion and political formats, sports programs such as rugby , sailing broadcasts and GT3 Europe races as well as entertaining programs such as the TV offshoot of Monocle magazine with Tyler Brûlé .

Since 2009, the station has been repeating the previous day's edition of the PBS talk show Charlie Rose with the host that gave the title worldwide in the evening hours . The talk show has been produced at Bloomberg studios in New York City since 1994. Rose is also available to Bloomberg for special programs.

In the current program, share prices are shown in the treadmill as well as index data, headlines, date and time.

Bloomberg Television's programming has been in HD production worldwide since April 25, 2011 . Bloomberg HD has initially only been distributed in the United States since May 2011. There the broadcaster again makes use of the “multiscreen” principle (see above). The SD channels were not converted to widescreen format. The area that is now free in height is used for the treadmills. So far, these have covered the lower area of ​​the transmission signal.

The Bloomberg Television program can be received in German-speaking countries as follows: