Earl of Surrey is a hereditary British title of nobility awarded three times in the Peerage of England . 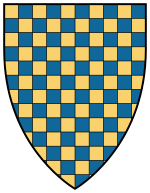 Coat of arms of the Warenne of Surrey

First award and interlude by the Duke of Surrey

For the first time the title was awarded in 1088 by King Wilhelm I to the Norman nobleman William de Warenne . The title is often referred to as the Earl of Warenne , possibly because William had relatively few lands in Surrey , but was wealthy in twelve other counties.

The title then passed to William's son and later to his grandson as 2nd and 3rd Earl, who were also named William. This was followed by Isabelle, daughter of the 3rd Earl, as 4th Countess of Surrey, whose spouses carried the title from their right. Her first husband was Wilhelm von Blois , son of King Stephan , the second husband was Hamelin de Warenne , a half-brother of King Heinrich II. Hamelin took the name Warenne and his son, grandson and great-great-grandchild later inherited the title as 5th, 6th. and 7th Earl.

After the male line of the Warennes became extinct for the second time in 1347, the title passed to Richard Fitzalan, 10th Earl of Arundel . This was a nephew of the last 7th Earl and already held the title of 10th and 3rd Earl of Arundel . He was succeeded by his son Richard , who was ostracized and executed in 1397 for treason against King Richard II and his title was revoked.

Shortly thereafter, on September 29, 1397, King Richard II conferred the title Duke of Surrey on his henchman Thomas Holland, 3rd Earl of Kent . On April 25, 1397, he inherited the titles of 2nd Earl of Kent and 3rd Baron Holand from his father . After the overthrow of King Richard II in 1399, the new King Henry IV recognized him from the Dukedom.

In October 1400, Thomas Fitzalan , son of the 11th Earl of Arundel, achieved the lifting of the ostracism and restoration of the Earl titles of Arundel and Surrey for himself. He died childless in 1415, so that the title of Earl of Surrey became extinct. The Earldoms of Arundel fell to his second nephew John FitzAlan , the 3rd Baron Arundel .

On March 24, 1451, the earl title was newly created in the second bestowal for John Mowbray , a grandson of the eldest sister of the last Earl of Surrey. The title is also called the Earl of Surrey and Warenne . In 1461 he inherited the title of 4th Duke of Norfolk , along with subordinate titles. Since he had no male offspring, both titles expired on his death on January 17, 1476.

Most recently, the title was bestowed on June 28, 1483 to Thomas Howard , who was a second cousin of the Earl's second bestowal. In 1514 he inherited the title 2nd Duke of Norfolk inherited from his father , which was newly created for this in 1483. His great-grandson, the 4th Duke , was executed for treason in 1572 and his titles were revoked.

Heir Apparent is the son of the current owner , Henry Fitzalan-Howard, Earl of Arundel and Surrey (* 1987).