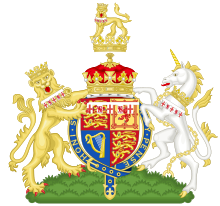 Coat of arms of the current Duke of Gloucester 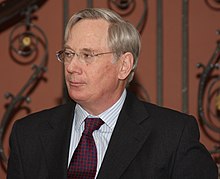 Duke of Gloucester is a hereditary British title of nobility that has been awarded four times in the Peerage of England and once each in the Peerage of Great Britain and the Peerage of the United Kingdom . All awards were made to members of the English and British royal families .

The current duke's family home is Kensington Palace in London .

Awards and history of the title

For the first time the title was on August 6, 1385 in the Peerage of England to Thomas of Woodstock , thirteenth child of King Edward III. , awarded. He had been promoted to Earl of Essex in 1376 and Earl of Buckingham in 1377 . He rebelled with the Lords Appellant against the king, died in captivity in 1397, and his titles were stripped from him shortly after his death so that they did not fall to his son.

On May 16, 1414, the title was bestowed a second time in the Peerage of England to Humphrey of Lancaster , the fifth son of King Henry IV. When he died in 1447 without a legitimate heir, the title expired.

The third award of the title in the Peerage of England in 1461 was given to Richard Plantagenet , brother of King Edward IV . When the Duke as Richard III. himself became king, the title was united with the crown. After Richard's death, the title was considered ominous because its first three bearers each died without inheriting the title. It was not awarded for the next 150 years until Henry Stuart, the son of King Charles I , received it in the Peerage of England on May 13, 1659 . Along with the Dukedom, he was awarded the subordinate title Earl of Cambridge . But Henry died on September 13, 1660 unmarried and childless, so that the title expired again.

The next official award was given to Prince William Henry , the brother of King George III. At this award on November 19, 1764 in the Peerage of Great Britain he was Duke of Gloucester and Edinburgh and was awarded along with the subordinate title of Earl of Connaught belonging to the Peerage of Ireland . These titles expired with the childless death of his son, the 2nd duke, on November 30, 1834.

Duke of Gloucester and Edinburgh (1764)

The heir ( Heir apparent ) is the son of the current Dukes Alexander Windsor, Earl of Ulster (* 1974).