The Department of International Relations (IB) (ger .: International Relations (IR)) or International Affairs (IA) (ger .: International Affairs (IA)) and Global Studies (GS) and International Studies (IS) deals with the studies of politics , economics and jurisprudence on a global level. It therefore forms a discipline consisting of political science - which traditionally deals with the relations between states - as well as economics and law . In recent decades, the focus has also expanded to include the relationship between state and non-state actors. The latter can include, for example, transnational companies or organizations. Since it is a sub-discipline of political science, international relations is an independent term and is therefore capitalized.

The social science research of international politics began after the First World War and went through to the beginning of the 21st century three major paradigmatic , so fundamental debates, several schools of thought have established long term by. These are themselves interspersed with several heterogeneous currents, which often contradict one another, but rely on the same basic assumptions. Therefore, international relations have a high theoretical content and a great interdisciplinarity , which extends above all to political science , economics , law , history , psychology and anthropology .

History of International Relations as a Scientific Discipline 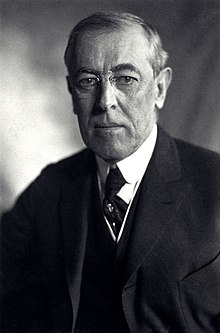 Theoretical-philosophical reflection on interstate relations goes back a long way in history and is associated with names from political theory and the history of ideas such as Thucydides , Aristotle , Machiavelli , Hobbes or Kant . The IB emerged as a scientific discipline after the end of the First World War . On May 30, 1919, the American and British delegations agreed to the establishment of scientific institutes to study international relations at the Paris Peace Conference . As a result, the British Institute of International Affairs , which was called the Royal Institute of International Affairs from 1926 , and the American Institute of International Affairs , which was soon merged with the Council on Foreign Relations , were established. This was followed by the establishment of scientific institutions in various countries whose main task was to research the causes of war. As early as 1919, the world's first professorship dedicated to international relations was established at Aberystwyth University in Wales.

In the beginning, idealism (later labeled as such) (also called liberalism in international relations ) was the discipline's only line of thought. Decisive for its establishment was the initiative of American President Woodrow Wilson , which he expressed in his 14-point program : End of secret diplomacy , freedom of the seas, free trade , disarmament , peaceful settlement of colonial conflicts and the establishment of a League of Nations as an instrument of collective Safety. The idealism is based on progress and Vernuftglauben. In the long term, the enforcement of the principle of reason must lead to a better world in which every conflict and every conflict of interests can be resolved cooperatively through compromise and settlement.

Idealistic thinking in international relations was first challenged in 1939 by Edward Hallett Carr , who had been appointed to the Wilson Chair at Aberystwyth University in 1936. In his book The Twenty Years' Crisis he found that the 20 years of crisis from 1919 to 1939 had not created a peaceful world despite the League of Nations, idealistic political advice and a policy of appeasement . He criticized the lack of the “power” factor in idealistic theory. With the book, Carr earned a reputation for being one of the founding fathers of realism in international relations .

After the Second World War , under American leadership, the UN , the World Bank and the International Monetary Fund were still largely founded in the spirit of idealism , but against the background of the East-West conflict , the "de facto re-establishment of the academic discipline international relations" took place realism dominated. The writings of Hans Morgenthaus were groundbreaking for the establishment of the new paradigm , especially the book Politics Among Nations from 1948 became a textbook. The realism was divided at any monolithic theory block, but some of the basic assumptions of all representatives of the realist school: International policy is based on cooperation or conflict of groups; essentially, these groups are motivated by their own interests (" egoism "); the interaction between the groups takes place constantly against the background of a possible use of material power with which coercion can be exercised (“power-centrism”).

The main trends in international relations are:

In addition to these main currents, there are other noteworthy approaches such as Neogramscianism , the state cartel theory , English school , feminist theories of international relations and postmodern approaches .

Up until the end of the Cold War, international relations were recognized as an "[US] American social science" or an Anglo-Saxon-dominated social science in which rationalistic explanations predominated. This was mainly due to the fact that state authorities and private foundations hoped that the young social sciences would gain directly usable knowledge in the interests of national security through their behavioral tendencies and therefore funded them.

In addition, international cooperation and behavior beyond nation states are increasingly the focus of research interest; Non-governmental organizations (NGOs), international organizations and states are therefore in a space of international communication or interaction. The contents of the discipline can be broken down into two different ways: on the one hand, according to the interpretative approaches that are used (theories), and on the other hand, according to the policy fields dealt with ( policies ) . In the history of the IB, there have been three so-called “great debates”, long-lasting research discussions that have shaped the subject: in the 1940 / 50s the first between idealism and realism, in the 1960s between scientism and traditionalism and since the 1980s between Postmodernism and Positivism . So far, the IB have been very strongly influenced by US political science with a behavioral orientation.

According to Czempiel (2004), the IB's understanding of politics can be described as the “authoritative allocation of values ​​in the areas of security, welfare and rule”.

There are three dominant metatheoretical models in international relations . The three metatheories represent different attitudes with regard to the question of whether and how a theory has to explain empiricism and what explanatory claims a theory should have. Carl Böhret , Werner Jann, Eva Kronenwetter (1988) suggest the following subdivision:

1st group: normative-ontological , here certain values ​​and norms are simply set within the theories and it is important to establish this "good" order. So, should statements or ideals for a social coexistence are formulated within these theories, in the sense that there are objective truths that can be recognized with the help of science.

2nd group: empirical - analytical , the aim is to find out and formulate the connections between empirically perceptible reality in the form of legal statements. Social reality is assumed here, but is always considered accessible and perceptible, you just have to have the "right" methods and instruments available. However, this metatheoretical perspective does not know absolute truths.

3rd group: critical - dialectical , social reality is understood here more as a product. Furthermore, it is always forms of dialectics that bring about the progress of a society. The rule here is that society must be grasped in its entirety through research.

International system as an analysis level - the systemic approach

At this most extensive level, interaction patterns can be examined in order to be able to identify possible causalities . Since there is no high uniform level of methodological development, there is no "cumbersome" empiricism , which gives scientists a lot of freedom.

The disadvantage of this level of analysis is the clear overestimation of the system's influence on state actors and the clear underestimation of the state's ability to influence the international system. It is therefore easy to find a deterministic mode of orientation in which state autonomy is neglected. States are also assumed to have a certain degree of uniformity and domestic politics are viewed as a black box , which may rule out important influencing factors. Cultural differences are often not taken into account in the course of generalization. Therefore, the informative value of this analysis level is limited to correlative statements, since there is no adequate basis for causal statements.

The nation-state as a level of analysis - the subsystemic approach

Differentiating the actors enables a differentiated analysis. Generalizations therefore tend to be more precise when the individual actors are examined more closely. This enables a detailed analysis of the goals, motivations and purposes of national policies.

However, there is great difficulty in attempting to create a sophisticated model for the comparative study of foreign policy because there are many details that complicate the process. There is also the further risk of overdifferentiation, whereby differences are overemphasized. This is supported above all by a certain ethnocentricity , which makes objective statements difficult.

The prevailing paradigms of international relations are also criticized because of the state fixation of political realism. The assumption of a central role for the state is the focus of the criticism. From a feminist perspective, for example, the security concept used in the Malestream is rejected: It is criticized that the - politically and scientifically - used security concept is based on a state-related understanding of security. Feminist researchers in international relations emphasize that this security concept does not address the realities of life for most women. In the discipline of Feminist International Relations (FIR) - so-called in the English debate - a sometimes radically changed methodology was therefore applied: the main founder of this discipline, Cynthia Enloe (Enloe 1989), and since then many others no longer address the diplomatic level politically Actors, but the world of women in concrete, local living spaces and as part of international relationships. In this way, for example, the specific need for security of women in their local realities can be addressed independently of (fragile to authoritarian) statehood. In connection with these approaches, the term “the private is international” can be seen accordingly.

In continental Europe , the Institut Barcelona d'Estudis Internacionals (IBEI) in Barcelona, ​​the Bologna Center of the School of Advanced International Studies in Bologna, the Institut d'Etudes Politiques in Paris and the Geneva University Institute for International Studies and Development (IHEID) are important To name study institutions. In general, a significant increase in educational opportunities in the field of international relations can be seen, which is due to the high popularity of such an interdisciplinary education.

The journal Foreign Policy (FP) regularly publishes the relevant ranking for master’s courses in international relations worldwide, the so-called Foreign Policy Ranking . The world's leading schools for international relations are also organized in the Association of Professional Schools of International Affairs (APSIA). Membership in the organization, which includes renowned institutions such as Harvard University , Yale University , Princeton University or Columbia University , is also a seal of quality for the school in question, as is the case with business schools . The University of St. Gallen is currently the only member of the APSIA in the German-speaking area.

Independent of specialized courses, international relations are an integral part of every regular course in political science and, depending on the university, can also be selected as a major.