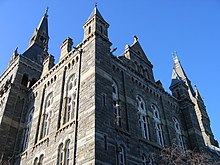 The Georgetown University in Washington, DC , is the oldest Roman Catholic , of Jesuit -led University in the US. It is based in the posh Washington district of Georgetown and is one of the most renowned universities in the world. The elite university is best known for its political science / international relations, economics and law faculties, each of which is among the best in the USA. The School of Foreign Service at Georgetown University in particular is one of the leading institutions of its kind worldwide. Georgetown has many well-known alumni, including the 42nd President of the United States, Bill Clinton , as well as several other heads of state, members of royalty, influential politicians, ambassadors and billionaires. Georgetown is a member of the Association of Jesuit Colleges and Universities .

Georgetown students are extensively recruited for the US government and careers in finance and investment banking , among other things .

In addition to the campus in Washington DC, Georgetown also has a second campus in Qatar .

Georgetown was founded in 1789 by the Jesuit father John Carroll (1735-1815). The first student was William Gaston (1778-1844), who began his studies in Georgetown in 1791, but had to drop out due to illness. In 1814, the same year that Pope Pius VII re-admitted the Jesuit order, William Gaston, now Congressman, helped the university gain official recognition by the US Congress in the form of a federal charter , the signed by President James Madison on March 1, 1815. In 1817 the university's first two graduates, New York brothers Charles and George Dinnies, were awarded a Bachelor of Arts degree . In 1850 the college was expanded to include the medical faculty (today: School of Medicine), and 20 years later, in 1870, the law faculty (today: Law Center ) was added. At the time, tuition fees were $ 50. Under Father Patrick Healy (1834-1910), the first African-American to obtain a PhD and who directed Georgetown from 1874 to 1882, Georgetown experienced its second heyday, transforming itself from a small liberal arts college to one modern university.

After the end of the American Civil War (1861–1865), in which Georgetown students and graduates fought on both sides and the Union Army requisitioned numerous buildings of the university, the university adopted the colors blue (color of the Northern states , Union) and gray (color of the Southern States, Confederation ) as a symbol of the reunification of the country.

Georgetown University originated from John Carroll, an American-born Jesuit. Carroll completed much of his education in Europe and was the first bishop to return to the United States in 1773. His goal was to empower the future of American Catholicism through education, particularly by founding an elite Catholic educational institution. Carroll's vision at the time of the American Revolution was that a strong Catholic institution like Georgetown University would contribute significantly to the political, cultural, and intellectual life of the young nation. He founded the university outside the settlement of Georgetown on the banks of the Potomac River. The growing religious tolerance in America , which was still young , made it possible for people of every social class and religious background to study at the university. Carroll saw Georgetown as a strict academic Catholic educational institution that is largely shaped by students of different origins. Carroll's vision is still lived today: Georgetown University is internationally known for its focus on the Catholic faith and Jesuit traditions. The good connection to politics, economy and society as well as the religious and cultural pluralism of the university distinguish Georgetown University from other North American universities.

"The Spirit of Georgetown"

Even today, every student should commit to an ethical principle that distinguishes Georgetown as a traditionally elitist institution. This Spirit of Georgetown takes up a 450 year old Christian tradition, which was largely inspired by Ignatius von Loyola , the founder of the Society of Jesus ( Societas Jesu ). In detail, the cornerstones are as follows:

Other important pillars of the ethical concept are: Educating the Whole Person , Cura Personalis , Faith and Justice , Women and Men for Others , Interreligious Understanding , Community in Diversity .

The college is located in Georgetown , a very affluent neighborhood in northwest Washington, DC, between 35th Street NW and Glover Archibold Park and between the Potomac River and Reservoir Road. It's about 20 blocks from the White House . The law school (Georgetown University Law Center) is located on New Jersey Avenue , just blocks from the Capitol , Library of Congress, and Union Station , instead of on the main campus .

Admission rates are among the lowest in the world. The School of Medicine, for example, admitted 2% of applicants in the 2009 admission year. The well-known Master of Science in Foreign Service (MSFS) program, which includes King Felipe VI. of Spain and King Abdullah II of Jordan had an admission rate of 5% in the same year. The MSFS program is also one of the most prestigious degrees in international relations in the world. In the ranking of the relevant magazine "Foreign Policy" from 2011/12, Georgetown took first place for professionally oriented master's programs in international relations, ahead of Johns Hopkins University, Harvard University and Princeton University.

The sports teams at Georgetown University are called Hoyas . The university is a member of the Big East Conference .

In addition, dozens of members of the American Congress graduated from Georgetown University. Georgetown University also has a strong focus on college basketball and has produced a number of NBA players, including Allen Iverson , Patrick Ewing , Dikembe Mutombo , Alonzo Mourning , Don Reid, Jerome Williams, Jaren Jackson, Jahidi White, but also other well-known Athletes such as the American football player and member of the College Football Hall of Fame Al Blozis , as well as numerous celebrities in the American media and entertainment industry, including Maria Shriver (journalist and ex-wife of Arnold Schwarzenegger ), William Peter Blatty (author of Der Exorcist ), Carl Reiner (father of Rob, director and actor in Ocean's Eleven ) and Bradley Cooper (actor in The Hangover ). With Ewing, Mutombo and Mourning, three former Georgetown Centers are in the Naismith Memorial Basketball Hall of Fame . Allen Iverson will also be inducted into the Hall of Fame in 2016.

According to Vanity Fair , Georgetown is home to a particularly large number of royalty, such as B. Paul of Greece , Felipe of Spain and Abdullah II bin al-Hussein .