The title of this article is ambiguous. Further meanings are listed under Quentin Roosevelt (disambiguation) .

Quentin Roosevelt in his machine, 1918

Quentin Roosevelt (born November 19, 1897 in Washington, DC , † July 14, 1918 in Coulonges-Cohan ) was the youngest son of the US President Theodore Roosevelt . He fell as a fighter pilot in France during the First World War .

Quentin Roosevelt was three years old when his father became president and grew up in the White House . He attended private boarding schools in Alexandria, Virginia , Connecticut, and Arizona, and was enrolled at Harvard University in 1915 . Although he, due to the war, did not finish his studies there, awarded him the University in 1919 posthumously the degree of BA .

After the USA entered the war, Roosevelt left the university in May 1917 and joined the newly formed 1st Reserve Aero Squadron as a volunteer , the first air reserve unit in the USA. The training took place at the Hazelhurst Field on Hempstead Plains Aerodrome on Long Iceland instead, the later named after him airfield Roosevelt Field . After completing his training and promotion to lieutenant , Roosevelt was transferred to France, where he was initially involved in setting up the large training base of the United States Army Air Service at Issoudun , first as a supply officer, then as commander of one of the airfields . At the same time he pursued his training as a pilot . As such, he was initially a flight instructor, but then transferred to the 95th Aero Squadron in May 1918, part of the 1st Pursuit Group. The squadron was initially stationed in Touquin and then from July 9, 1918 in Saints . On July 10th, Roosevelt reported his first downing of a German fighter plane. 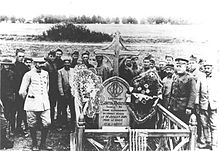 Only four days later, his was Nieuport 28 - biplane in a dogfight over Chamery , about ten kilometers north of the Marne in Coulonges-en-Tardenois shot down. He himself was killed in the head by two machine gun shells. The German side buried him with full military honors, with around 1000 soldiers lined up in formation at the crash site of his plane. The village of Chamery and Roosevelt's grave fell into Allied hands on July 18. The grave was marked with a large cross and fenced in and became a place frequently visited, especially by American soldiers. The French government honored him with the posthumous award of the Croix de guerre with a bronze palm branch for honorable mention in the army report.

1955 Quentin Roosevelt's remains were on the American Cemetery Normandy American Cemetery and Memorial in Colleville-sur-Mer reburied where they alongside his brother, Brigadier General Theodore Roosevelt Jr. , were buried. The simple wooden cross that the Germans first erected on his grave is now exhibited in the National Museum of the United States Air Force on the outskirts of Wright-Patterson Air Force Base in Dayton , Ohio .