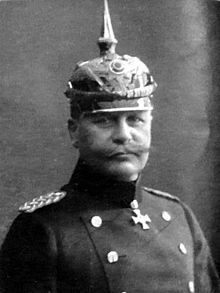 Georg Cornelius Adalbert von der Marwitz (born July 3, 1856 in Klein Nossin , † October 27, 1929 in Wundichow ) was a Prussian cavalry general who commanded the 2nd Army from December 1916 to September 1918 during the First World War .

Georg came from the New Marks of the Marwitz nobility . He was the son of the manor owner and captain a. D. Adalbert von der Marwitz auf Klein-Nossin and Wundichow and his wife Maria Anna, née Heinrichsdorff, from a Danzig patrician family ( Der Lachs zu Danzig , Danziger Goldwasser ). He inherited the Wundichow estate and shares in the liqueur factory.

Marwitz joined the 2nd Guard Uhlan Regiment of the Prussian Army in Berlin in 1875 from the Potsdam Cadet Corps as a Second Lieutenant . In 1881 he married Helene von Kameke, daughter of the then Minister of War Georg von Kameke . From 1883 to 1886 he was at the War Academy . Until 1900 he commanded the 3rd Guard Uhlan Regiment before becoming Chief of Staff of the XVIII. Army Corps was appointed. This was followed by the assignment as commander of the 1st Guards Cavalry Brigade as well as the promotion to major general in 1908. From March 2, 1911, Marwitz was commissioned to lead the 3rd division , to whose commander he was promoted to lieutenant general on March 20 March 1911 was appointed. On November 11, 1912, he gave up the division and became inspector general of the cavalry .

With the outbreak of the First World War, the General Inspection ceased to exist and Marwitz became Higher Cavalry Commander 2 on the Western Front . He took part in the battle at Haelen on August 12, 1914 and in the battle of Le Cateau on August 26 . After participating in the race to the sea and the transition to trench warfare in the Battle of Flanders , the Higher Cavalry Command 2 was disbanded on December 23, 1914. Marwitz took over command of the newly established XXXVIII on the Eastern Front . Reserve Corps . The new major association proved itself in the winter battle in Masuria . Later the corps was to become part of General Linsingen's southern army as the “Beskid Corps” . After his deployment in Austria-Hungary against the Russian army in February 1915, he received the order Pour le Mérite on March 7, 1915 and the oak leaves on May 14, 1915 for this highest Prussian bravery award.

In November 1915, Marwitz was appointed Commanding General of VI. Army Corps on the Western Front. Soon he was deployed again on the Eastern Front, where he was involved in the defense of the Russian Brusilov offensive with the "Marwitz Group" of the Bug Army named after him from June 1916 . On October 6, 1916, he became adjutant general of Kaiser Wilhelm II. On December 17, 1916, Marwitz became Commander-in-Chief of the 2nd Army on the Western Front, and in the spring of 1917 he followed the tactical retreat to the new Siegfriedstellung . In November 1917 he repulsed a British attack at the Battle of Cambrai . At the end of March 1918, the 2nd Army participated in the central section of the German Michael Offensive . In the second half of the year his troops suffered a heavy defeat after the British attack on August 8 at Amiens and had to withdraw. From September 1918 until the end of the war, Marwitz commanded the 5th Army near Verdun , where he was confronted with the Allied Meuse-Argonne offensive . After the end of the war and the defeat of Germany, Marwitz retired from public life in December 1918.

Marwitz, musically interested and gifted, was at times a member of the Sing-Akademie zu Berlin under Georg Schumann .

Marwitz saluting at the head of his troops on November 20, 1918 on the march back through the city ​​of Luxembourg