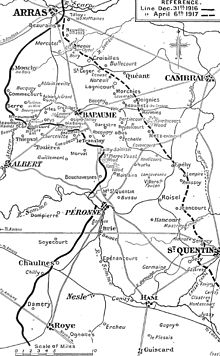 German retreat to the Siegfried Line in March 1917 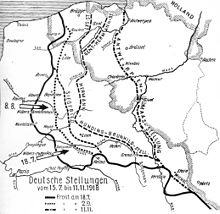 Siegfriedstellung and other German lines of defense in 1918

The Siegfriedstellung or Siegfried Line was a defensive position of the German troops on the Western Front during World War I from March 1917 to October 1918. It was only breached shortly before the Armistice of Compiègne and extended in northern France from Arras via St. Quentin to Soissons . The Allies also called it Hindenburginie in reference to Commander-in-Chief Paul von Hindenburg . The name Siegfriedstellung also had a symbolic character ( Siegfried from the Nibelungen saga , based on the opera of the same name by Richard Wagner ).

The Supreme Army Command had been planning a strategic retreat for a long time. After the heavy losses in the Battle of Somme in 1916, the front was to be shortened in order to save people and material and to free them up for upcoming offensives on other fronts. When the German army learned of the planned major offensive of the Entente in early 1917, it was decided to shorten the front and withdraw. Otherwise there was a threat of excessive demands on one's own strength and the breakthrough of the enemy. All accommodation, infrastructure and supply facilities were systematically destroyed and a population of 125,000 in the affected northern French region was forcibly evacuated. The preparations for the retreat took place under the code name " Alberich " from February 9 to March 15, the retreat itself extended over three days from March 16 to 19, 1917.

In the course of the spring offensive of 1918 , the German troops came within 40 to 50 kilometers of Paris again at the end of May 1918 , similar to the 1914 Battle of the Marne . As a result, however, this advance merely meant an overstretching of the German front lines. After the failure of the “Marneschutz-Reims” offensive in mid-July 1918, the German army was finally on the defensive. First there was the second battle of the Marne (July 15 to August 6, 1918). On August 8, the battle of Amiens began . She initiated the Allied Hundred Days Offensive . At the end of August and beginning of September, the German troops were pushed back to their starting positions before the spring offensive (Hindenburg line) around St. Quentin in the summer section . At the end of September, initiated by the American Meuse-Argonne offensive , the attack on the Siegfried line began.

The Siegfriedstellung was broken on September 27, 1918 by British divisions. Since there were no more military fortifications of the German Reich to the east of it, there was an acute danger that the German western front would collapse. The Allied victory at the Siegfried Line was one of the reasons why General Quartermaster Erich Ludendorff demanded the initiation of armistice negotiations and the parliamentarization of the Reich on September 29, 1918 . Strategic retreat was the only way to respond to the Allied superiority. It was only intended as a temporary measure for later offensives. On November 9, 1918, the OHL's pressure for an armistice was granted. The First World War was effectively over.