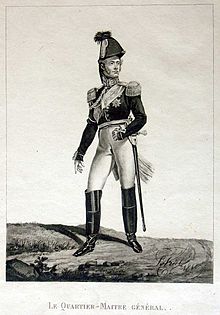 Ludwig Karl von Kiel , Quartermaster General at the time of the Napoleonic Wars 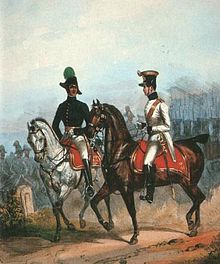 With the further development of the staffs in Germany and Russia in the command staffs from the Army , Army Group (Germany) and Fronts (Russia), the deputy of the Chief of Staff for operational tasks was designated as Quartermaster General . Today this function corresponds to G3 / A3 ( General Staff 3 or Admiral Staff 3 or Air Staff 3 ) in NATO .

Prussia and the German Empire

The quartermaster general was usually an infantry general or a cavalry general and, like the chief quartermasters , belonged to the army general staff. He also acted as head of the regional survey.

A special position in the First World War was that of the First Quartermaster General . It was created in 1916 especially for the General of the Infantry Erich Ludendorff , in order to put him in fact on an equal footing with the Chief of the General Staff , Field Marshal Paul von Hindenburg . This was also due to the fact that the actual commander-in-chief , Kaiser Wilhelm II , had no general staff experience. Both officers together formed the third Supreme Army Command from 1916 to 1918 and were responsible for the conduct of the war during this time. After Ludendorff left in 1918, this position was held by Lieutenant General Wilhelm Groener until 1919 .

In the General Staff of the Army of the Wehrmacht , with the mobilization in August 1939, the position of General Quartermaster was re-created from the 6th (Quartermaster) Department , who was directly subordinate to the Chief of the General Staff of the Army . He was responsible for all questions relating to the supply of the field army and for questions of military administration. He also issued the basic instructions for the handling of executive power and for civil administration in the operational area, where the prisoner-of-war camps located there were subordinate to him. For these purposes, he maintained branch offices in the theaters of war and communicated with the chief quartermasters of the armies and army groups . In addition, he exercised jurisdiction over the members of the headquarters of the OKH and the subordinate departments. Quartermaster General of the Army were:

A comparable position already existed in the Luftwaffe from 1938 . Departments 2, 4 and 6 of the General Staff of the Air Force, responsible for questions of organization, supply and armaments, were subordinate to this. Quartermaster General of the Air Force were:

The quartermaster general of the British Army ( English Quartermaster-General to the Forces ) worked under the supervision of the Commander in Chief, the supply of the army with food, food and firing as well as accommodation, dispatch of materials, troop movements, barracks equipment and equipment. In addition, he administered the transport ( train ), the purser , veterinary department and all institutions connected with these departments. He served the Minister of War as an adviser.

In the Sonderbund War of 1847 , the federal staff held the rank of quartermaster for the commander of the federal army .