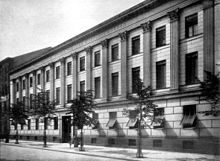 Facade of the teaching building at Dorotheenstrasse 58/59, designed by Franz Schwechten (1883)

The Prussian War Academy in Berlin was a military university and military academy for the training of general staff officers . It was founded by Gerhard von Scharnhorst on October 15, 1810 as a general war school for the Prussian state . At the beginning of the First World War in 1914, the War Academy was closed and was banned by the Treaty of Versailles . It was reopened in 1935 and finally closed in 1945. The Bundeswehr leadership academy in Hamburg is her successor . The Prussian Military Academy must be distinguished from the Prussian Hauptkadettenanstalt , military Fachschulen (weapons schools), which mediated branch of specific skills and by the military schools , the officer candidates to the officer examination ( officer Patent prepared).

Forerunner of the academy until 1810

As early as 1653, the Great Elector founded a knight academy in Kolberg through Count Bogislaw von Schwerin . One wanted to remedy the inadequate education of the nobility by creating this institution, because the knightly order complained that “the young noblemen got tired of schools and studies too early, that even those who went to war, over the hardship and the Complaints tire too easily and returned home. ”King Friedrich I moved the Kolberg School to Berlin and employed several excellent teachers. Nevertheless, the facility was closed again after a few years.

After the Seven Years' War (1756–1763), King Friedrich II was faced with the task of reorganizing and refreshing the army . During the war it had become evident in all European states that the education of officers was poor. It was believed that the experience of war taught everything that was necessary. After the war, the importance of scientific education was recognized and new educational institutions were set up in all European countries.

In Prussia, Friedrich II established the Académie des nobles (also called Académie militaire ) in Berlin in 1765 . Young nobles were to be trained there for military and civil service. Classes covered history, geography , philosophy , rhetoric , geometry , fortification , grammar , French, drill , dancing and horse riding. The students came either directly to this academy or from the cadet institutions . Frederick II brought the twelve best graduates to Potsdam to train them personally in the higher arts of war . These officers formed the cadre for general staff officers .

After the king died in 1786, this tradition of further education was only continued from 1801. The “Academy for Young Officers of the Infantry and Cavalry” was formed from selected participants, but it was not established as an institution until the first class had finished on June 21, 1804. The training consisted of a three-year course. Teaching took place from September 1 to March 31, the rest of the year the officers served in their units. The general quartermaster (forerunner of the chief of staff) of the army was in charge of the school , while the direct management was exercised by a senior officer. Particularly capable young officers from the Berlin inspection as well as 20 foreign officers were eligible as participants (36 officers could be identified by name for the first year), who were trained in all specialist sciences, logic and mathematics. However, this academy was closed at the beginning of the Fourth Coalition War (1806) and was not reopened as a result of the defeat.

Colonel Gerhard von Scharnhorst and Colonel Levin von Geusau were elected heads of the “Academy for Young Officers” . Scharnhorst exercised significant and progressive influence on the officers of the first class. These included Carl von Clausewitz and other officers who later belonged to the circle of army reformers. Scharnhorst himself and almost half of the officers of this year also belonged to the " Military Society ", a non-governmental association for the discussion of the latest war experiences.

After the war of 1806/07, military reform began in Prussia . By a cabinet order of May 3, 1810, three war schools (Berlin, Königsberg , Breslau ) were set up in addition to the cadet schools to train officers. The war school in Berlin was also responsible for the training of officers. This department offered a three-year course of nine months each, with the other three months devoted to service in the force or practical exercises. The training included the military sciences, mathematics, chemistry, physics and languages. Admission to the course was made dependent on an examination and later on a previous three-year period of service. However, the number of participants was limited to 55.

During the Wars of Liberation from 1813 to 1815 the war school remained closed, but in 1816 it was reopened as the "General War School". It was now completely separated from lower educational institutions (these were now called brigade schools , later division schools ) and received university status . Since October 1, 1859, it has officially been called - by a cabinet order of August 19, 1858 - the “Royal Prussian War Academy”.

The War Academy changed its location several times within Berlin. At first it was housed in a building on Burgstrasse . Then she moved into a Schinkel building on Unter den Linden , later expanded to include a rear building on Dorotheenstrasse . This four-story brick building, built between 1879 and 1883, consisted of a front building and a transverse wing. The building contained lecture halls, offices, a room for war games, a library and stables. Up until the beginning of the First World War, lessons were given there.

The War Academy was originally designed as a kind of university to promote higher general and military education in the army as a result of the military reforms. In later times their curriculum narrowed more and more to the military sciences at the expense of the general subjects. In principle, the academy was open to every officer, as participation was based on voluntary reporting. Admission requirements were a three-year previous service, good health, in addition to scientific pursuit, special abilities and qualifications and passing the entrance examination. Before the applicant could take the required entrance examination, the regimental commander had to confirm the candidate's personal and professional suitability. This instrument was also often used for social selection (“good old Prussian substitute”, “desired circles”). The preparations for the test were made in the regiment; however, the entrance examination took place centrally in the form of written exams. As a rule, only graduates of the academy were accepted into the general staff or could exercise the teaching post themselves . The course was three years and consisted of two parallel classes. At first it was still possible to attend lectures for only one or two years for general further education. However, artillery and engineer officers had to complete the full cycle. Subjects were all war sciences, languages, and general historical and mathematical sciences. The non-military subjects were only partly mandatory.

The selection before, during and after training at the academy was high. Just under a fifth of all applicants passed the entrance examination. Due to the oral and written performance during the course, the final written examination in some subjects and the final practical examination as part of an exercise, only about 30% of all course participants passed their studies at the War Academy. After passing the course, there was a two-year period of service in the general staff on probation, during which the suitability of the officer for general staff service was to be determined. Around half successfully completed this application on a trial basis, so that only 15% of the course participants and only 3% of the applicants for the War Academy were later used as officers in the general staff service.

The teachers were officers of the General Staff and professors from the Berlin University . The War Academy also worked closely with the Department of Oriental Languages . The Prussian War Academy was subordinate to the General Inspector of Military Education and Training , and from 1872 to the Chief of the Army General Staff. A general took over as director. There was also a study commission to monitor and promote scientific achievements.

The number of graduates, which averaged 100 to 120 officers in the first half of the 19th century (around 30 to 40 per course or teaching group), rose steadily from 1871 onwards in connection with the ongoing reinforcements of the army and the increase in general staff positions. In 1897 there were 400 (around 130 per course) and by 1909 already 480 (around 160 per course). The teaching groups, led by General Staff officers, were further divided into lecture halls (initially up to 50, later 25 to 30 officers). At the head was a tactics teacher.

The Prussian War Academy acquired an almost legendary reputation as a result of the victories it achieved in the wars of unification and the good work of the General Staff. The war academy was the model for many other, newly created institutions of this type worldwide. Probably all the higher military leaders of Prussia and the German Reich as well as innumerable guest officers from all over the world have been trained there. After the establishment of the German Empire in 1871, the Prussian War Academy became the central military training facility for the German land forces . Since 1867 in Munich existing War Academy was much smaller than the Prussian and formed only for the Bavarian army from. However, its main training content corresponded to the Prussian War Academy. After the beginning of the First World War , the War Academy was closed and did not reopen until the end of the war. The Reichswehr circumvented the prohibition of the War Academy established by the Treaty of Versailles by establishing the training of assistant leaders .

Building of the War Academy in Berlin's Kruppstrasse, with Reich war flags on the roof (1938)

By upgrading the armed forces who opened Wehrmacht in 1935 the Institute of War again. From 1935 to 1939 she was housed on Kruppstrasse in Berlin-Moabit . Initially, a two-year training course with a number of 100 to 150 officers was carried out, which reached the level of the army corps . The focus was on the acquisition of specialist military knowledge. In autumn 1939, with the beginning of the Second World War , the training was discontinued and replaced by general staff courses. In March 1943, the academy reopened, to which almost 200 officers were called up. It was moved to Hirschberg in the Giant Mountains and was in Bad Kissingen at the end of the war . The focus was on training general staff officers for the divisional level. In addition to the main subjects of operational tactics and war history , lessons were also given in special subjects and areas such as supply, transport and motor vehicles, as well as special armed forces and technical issues. With the end of the Second World War, the academy was finally closed.

The Prussian War Academy is the only well-known institution of the old Prussian army that has existed to this day with the same objective without any loss of intellectual substance - with interruptions and contemporary changes. According to a memorandum from 1867, this reads: “The war academy, which has the character of a military university, [...] is supposed to raise the scientific spirit in the army, [...] is supposed to make the more capable officers of all weapons [...] higher leaders to train as general staff officers [...]. ”The successor institution, but“ not a traditional institution ”, is the command academy of the Bundeswehr in Hamburg .