War school at Waterlooplatz in Hanover, left around 1896, right 2007 (only with ground floor as a result of bombing in World War II)

The former royal war school in Potsdam on the Brauhausberg , until 2014 Landtag of the state of Brandenburg , aerial photo 2008

In Prussia , they were initially set up in Berlin , Königsberg and Breslau in 1810 as part of Scharnhorst's army reform by Lieutenant Colonel Gustav von Rauch . As early as 1816 they were converted into a general war school ( Prussian War Academy ) for further training and a number of brigade schools for the training of officers. The latter were later given the name division schools and finally - with the addition of the entire German army  - the name war school again.

The purpose of the war schools was the practical and technical training of officer candidates of all branches of arms who were required to attend a war school before being admitted to the officer examination. Attending the war school had to be preceded by six months of service with the troops .

At the head of the school was a staff officer as director. After completing a course that lasted 35 weeks, the officers' examination was taken before the Senior Military Examination Commission. The curriculum included tactics , army organization, weapons theory, fortification theory, terrain theory, and mapping with plan drawing, military business style and service knowledge. In addition, the students were trained in drills , shooting, gymnastics , fencing and horse riding. 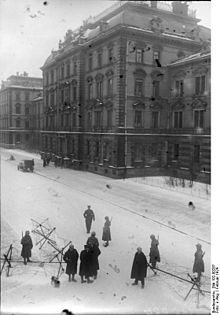 The Bavarian Army had its own war school. This was built on November 1, 1858 in Munich and existed until 1919.

In the Kingdom of Württemberg , the Ludwigsburg War School was an army officer training institute from 1820 to 1874.

With the rearmament , four war schools for officer training were re-established in Dresden , Hanover , Munich and Potsdam ; additionally with the connection of Austria in Wiener Neustadt in the former Theresian Military Academy , whose first commander was the later Field Marshal Erwin Rommel .

There were also war schools with different curricula and objectives, such as the Austro-Hungarian War School in Austria or Russia , Czechoslovakia ( Vysoká škola válečná ), France ( École supérieure de guerre ), Italy and the United Kingdom .

After the Austro-Prussian War in 1866 , Leopold II of Belgium took the Berlin War School as a model and relocated staff officer training from the Royal Military Academy to L'École de Guerre (French) / Krijgsschool (Flemish), which is subordinate to the War Ministry .