The title of this article is ambiguous. Further meanings are listed under Nysa (disambiguation) .

Nysa [ ˈnɨsa ] (German Neisse , also spelled Neisse ) is a city in the Opole Voivodeship in Poland. It is also the seat of the town-and-country municipality of the same name with around 57,500 inhabitants and the powiat Nyski .

From 1290 until the secularization in 1810, Neisse was the seat of the Breslau prince-bishops. Together with the episcopal principality Neisse , Neisse came to the Crown of Bohemia as a fief in 1342 . After the First Silesian War in 1742, it fell to Prussia, along with most of Silesia . It was only with the reorganization of the province of Silesia in 1813 that Neisse was incorporated into the administrative district of Opole and thus Upper Silesia . At the end of the Second World War , the city fell to Poland . Due to the destruction of the Second World War, the historical cityscape has only survived in fragments. The most important architectural monuments were rebuilt. Because of its baroque architecture it was called "Silesian Rome".

The city is located 55 kilometers southwest of Opole ( Opole ) on the Glatzer Neisse , which is dammed southwest of the city to the Neiss reservoir .

In the vicinity of Nysa are the places Grodków (Grottkau) in the north, Niemodlin (Falkenberg) in the northeast, Korfantów (Friedland) in the east, Prudnik (Neustadt OS) in the southeast, Głuchołazy (goat neck) in the south and Otmuchów (Ottmachau) with the reservoir of the same name in the west. Beyond and along the border with the Czech Republic , which runs about 20 kilometers southwest, lies the Zuckmanteler Bergland .

Basilica of St. James and Agnes and unfinished campanile in the city center

Rathausplatz in the city center

The city of Neisse was founded before 1223 at the confluence of the Glatzer Neisse and Biele rivers by the Breslau bishop Lorenz in a Slavic settlement under Flemish law and settled with Germans. It was built on an almost square area and a grid-shaped street network with a ring and church square in a central location. It was first mentioned in a document dated May 23, 1223, when the Neisser Vogt Walter was appointed locator of the episcopal estate Ujest . The city belonged from the beginning to the territory of the Ottmachau castellan , which was owned by the diocese of Breslau as early as 1155 . After the division of the Duchy of Silesia in 1248/1251 Neisse fell to the Duchy of Wroclaw together with the Ottmachau administrative district . Shortly before his death, Duke Heinrich IV granted the Neisser-Ottmachau diocese sovereignty , in which the bishops exercised both spiritual and secular power. At the same time Neisse became the residence of the principality of Neisse , which was created in 1344 under Bishop Preczlaw von Pogarell as a fiefdom of the Crown of Bohemia , which the Habsburgs held from 1526 .

The episcopal moated castle, already occupied in 1260, was included in the city fortifications in the middle of the 14th century, which at that time already had four gates: the Münsterberger , Breslauer, Zoll- and Brüdertor. The road connection from Vienna to Breslau ran over the rounded south-western side of the ring , which also made Neisse important in long-distance trade. Numerous churches, monasteries and other ecclesiastical institutions were built in and in front of the city. As early as 1239, the Wroclaw Bishop Thomas I founded the Order of the Lords of the Cross with the double red cross in Neisse , which was located in the Marienspital (Kreuzstift) in the old town. The parish school near St. Jakobus was first mentioned in 1366 and raised to a grammar school in 1418. In 1428, during the siege by the Hussites , the city was able to assert itself, but the suburbs were destroyed. At that time Neisse had about 4500 inhabitants. In 1477 the Ottmachauer Kollegiatstift was relocated to Neisse, where it was initially located in St. John's Cathedral and, from 1650, in the Jakobus Church.

Although Neisse was an episcopal city, the Reformation also found its way there from 1522 . In 1575, under Bishop Jakob von Salza , the Breslau seminary was relocated to Neisse, where it remained until 1655. 1586 donated Bishop Andreas von Jerin a Pädagogium for twelve noble students. Including the suburbs, there were 36 fortification towers (nine of which were gate towers) and bastions in Neisse.

It was not until 1622, under Bishop Karl of Austria , that the Counter Reformation was carried out, with which the Jesuits had been commissioned. In 1624, at the suggestion of the bishop, the Jesuits founded the Carolinum grammar school , which developed into an important educational institution. The establishment of a university and a Konvikt as intended by Bishop Karl of Austria could no longer be realized because of his death in 1624. The baroque churches and monastery buildings built after 1650 still shape the cityscape, which is why Neisse was nicknamed "Silesian Rome".

During the Thirty Years' War Neisse was occupied by Margrave Johann Georg in 1621 , by the Saxons in 1632 and by the Swedes under Torstensson in 1642 . In 1633 the plague raged. The cityscape was fundamentally changed by the subsequent construction of fortifications according to the Dutch system, to which the suburbs were sacrificed. In 1729, Bishop Franz Ludwig von Pfalz-Neuburg built a new bishop's residence and a central hospital.

The yarn and linen trade as well as the trade in Austrian and Hungarian wines, which were regulated by episcopal ordinances in 1552 and 1556, were of economic importance. Since the city had the right to stack this , large wine cellars were built on the upper ring. Neisser Konfekt , a gingerbread specialty, has been produced just as successfully for centuries . The goldsmith's craft also gained importance .

After the First Silesian War in 1742, Neisse and most of Silesia fell to Prussia . With the Peace of Berlin , the state constitution was reorganized and the administration was reorganized, whereby the powers of the previous episcopal government were almost completely restricted. On the left bank opposite the old town which was the citadel Fort Prussia built and after King Frederick II. Named Frederick city , in the u. a. the garrison was housed. Plan of the Neisse fortress in the summer of 1741

In 1769 diplomatic negotiations between the Austrian Emperor Joseph II and the Prussian King Friedrich II took place in Neisse . The meeting was depicted in 1857 by Adolph Menzel in his history painting Meeting Friedrich II. With Emperor Joseph II in Neisse in 1769 . During the Fourth Coalition War , the Neisse fortress was besieged from February 23, 1807 to June 16, 1807. It was successfully held under the command of the fortress commander Georg von Steensen . After that, General Vandamme's French garrison capitulated .

The Prussian reforms brought about the introduction of the town structure in 1809 and the secularization of the Prussian part of the Principality of Neisse in the following year . This ceased the rule of the Breslau bishops in Neisse and in the Prussian part of the principality. The collegiate monastery and the monasteries were dissolved and the church property was expropriated, transferred to state property or partially squandered. The same fate befell the valuable libraries. In 1815 the district of Neisse was established, which one year later was reclassified from the administrative district of Breslau to the administrative district of Opole . Since then, Neisse has been included in Upper Silesia . 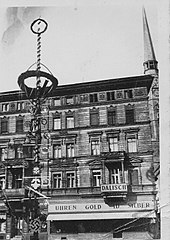 Dalisch jeweler in the center of Neisse (1941)

From the 19th century, curtain and lace manufacture gained economic importance. 1830 a. a. Agricultural machinery factories. In 1842 the congregation of the Gray Sisters of St. Elisabeth founded, which is dedicated to caring for the sick. In 1848 Neisse received a railway connection to Brieg . Further connections followed in 1874 to Kamenz , 1875 to Ziegenhals , from 1876 with a branch to Neustadt and in 1887 to Opole . From 1912 the circular railway operated to Steinau and Weidenau .

The city ​​theater was opened on October 14, 1852. Until 1926 it was mainly touring theaters , from 1926 it was restructured into a house with a permanent ensemble in the areas of drama, opera and operetta. In 1932 it was one of the most theater-loving venues in what was then the German Reich, with 2.65 visits per inhabitant annually. Well-known mimes have been involved over the years, such as Albert Bauer , Elfie Dugal , Wolfried Lier , Georg Molenar, Henry Vahl , Bruno Vahl-Berg , Otto Zedler or the director Erich Freund . During the last weeks of the war the interior was completely destroyed by fire; In the 1950s, it was rebuilt as Dom Kulturny - still the cultural center of the city today.

As early as 1877, with the razing of the inner fortress belt, new residential areas had emerged. At the beginning of the 20th century, Neisse had two Protestant churches, seven Catholic churches, a synagogue , a grammar school, a secondary school, a military technical school, a prince-bishop's college for boys and an agricultural winter school. In 1910 the southern suburbs Mittel and Nieder Neuland were incorporated, and on July 1, 1911, Neisse became an independent urban district . Before the First World War , the Catholic associations Quickborn and Heimgarten Adult Education Center were founded in Neisse . After the First World War, new residential areas were built due to the large influx of refugees from East Upper Silesia . In 1921 the community of Ober Neuland was incorporated into the Heiligkreuz Mission House . In the Reichstag elections , the Center Party was the strongest party in the Neisse district until 1933 .

Towards the end of the Second World War, Neisse was declared a fortress . Field Marshal Ferdinand Schörner sentenced the commandant of Neisse Fortress , Colonel Georg Sparre, and his alleged deputy to death without trial on March 22, 1945 , because they had left the fortress to the Red Army almost without a fight. The judgments were not carried out.

On March 24, 1945, the Red Army took Neisse. The population had already been asked to leave the city. Under the Soviet occupation, Neisse, which until then had not suffered any war damage, was about 80% destroyed. The houses on the Ring and the rows of houses along the main streets were particularly affected.

In spring 1945 the Soviet Union placed Neisse under the administration of the People's Republic of Poland, as did almost all of Silesia . The city was named Nysa . Some of the people who had fled had returned to the city, which had suffered further damage from arson. In December 1945 there were about 8,700 Germans and 5,000 newly settled Poles in the city. The latter came partly from the areas east of the Curzon Line , which fell to the Soviet Union as part of the " West shift of Poland " , where they had belonged to the Polish minority.

In early June 1946, almost all the long-established residents of Neisse sold . The remaining German minority was only recognized after the political change in Poland in 1989/90. In the 2002 census, only 98 people (0.2% of the population) with German nationality were counted. Today Nysa is an important economic and cultural center.

The presence of Jews in Neisse is first recorded in 1319. In 1327 the Breslau bishop Nanker pardoned a convicted Jew. In 1349 the local Jews were victims of a severe plague pogrom, in 1361 there was a new pogrom on account of allegations of desecration of the host . A wooden synagogue was built in 1410 and a Jewish cemetery in 1423 . In 1526 the Silesian Jews came under the rule of the German Empire . The Jewish community in Neisse had the largest number of members in 1861 with 464 people. In 1892 a new brick synagogue was built to replace an older building. In 1933 there were still 220 Jews living in the city. The end of the German-speaking Jewish community came with the Reichspogromnacht on November 9, 1938, during which the synagogue was devastated but not set on fire, and dozen of Jewish shops and households were demolished by SA troops. The 93 remaining Jews were deported to Auschwitz in July 1942 . In 1943 the Jewish cemetery was confiscated by the Gestapo and the synagogue was destroyed. 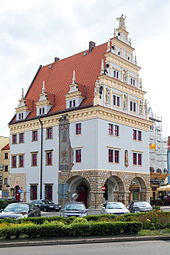 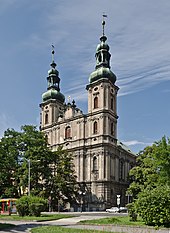 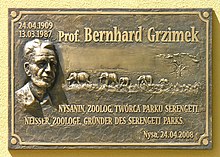 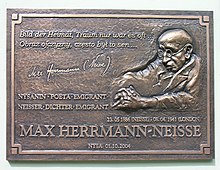 The town-and-country community (gmina miejsko-wiejska) Nysa has around 57,500 inhabitants on an area of ​​217.6 km² and is divided into 26 villages in addition to the main town of the same name.

Wikisource: Neisse in the Schedelschen Weltchronik  - Sources and full texts