Former riding arena of the Knight Academy in Lüneburg 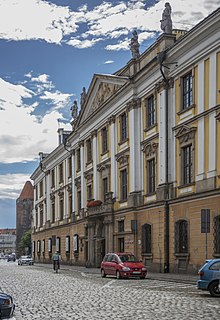 The small castle , location of the knight academy in Wolfenbüttel

Knight academies (also called knight schools and colleges of knights ) were educational institutions for the sons of noble families in the early modern period . They were created in German-speaking countries based on Western European models since the end of the 16th century. Thus, among other things, several knight academies were founded, in which from the beginning of the 18th century more and more common sons were admitted.

Up to modern times, school education for the descendants of the nobility, with the exception of the sons, who were intended for a spiritual career, hardly played a role. Under the impression of humanism and the competition of educated bourgeois groups in the administrations of the emerging territorial states , education also became more important for the nobility. Initially, this was mostly limited to the employment of a private tutor. In some cases, the sons of neighboring noble families also received common lessons. With the emergence of grammar schools since the Reformation , an orderly, collective education for nobility came into being. Institutions for the exclusive education of aristocrats did not emerge until the second half of the 16th century. They had their origin in southern and western Europe and were transferred from there to the Holy Roman Empire . Initially, sons of nobles from the empire attended knight academies in France during their cavalier journey .

Following the French model, the Collegium illustrious was founded in Tübingen in 1594 as the first German institution of its kind . Only a little later, in 1598, a knight academy was founded following a page institute in Kassel . In the course of the 17th century, numerous other institutions were added, such as the Siegen War and Knight School . After the Thirty Years War , the academies in Lüneburg (1655), Vienna (1682) and Wolfenbüttel (1687) were added. Other foundations of this kind arose in numerous territories up into the 18th century, for example the Erlangen Knight Academy was founded in 1701 based on the Pietist model in Halle / Saale and in 1703 in Salzburg , where bourgeois sons were also admitted. The Brandenburg Academy was founded in 1704, the establishment of the Silesian Knight Academy in Liegnitz was established in 1708, in Kremsmünster (from 1744) and in Innsbruck (from 1775). For a long time, however, the Catholic nobility preferred to send their sons to academies abroad - for example to Turin or Besançon . The Benedictine- run facility in Ettal Abbey was established in 1711 as a knight academy primarily for the Catholic nobility . 1837 founded cooperative of the Rhenish nobility Ritterbürtigen the Rheinische Ritterakademie in Bedburg .

In the Austrian provinces, as part of the reforms of Joseph II, all noble educational institutions were dissolved. After his death, only the Theresianum in Vienna and the academy in Innsbruck were reopened. Especially in the 19th century, the academies lost their importance under the impact of the rise of the humanistic grammar school. With a few exceptions, they were either closed or converted into high schools.

The information according to Norbert Conrads