Brest is a French port city in Brittany with 140,064 inhabitants (as of January 1, 2017). It belongs to the Finistère department . Due to its sheltered location on the Bay of Brest (French: Rade de Brest ), a deeply inland bay of the Atlantic , as well as the natural harbor in the area of ​​the mouth of the Penfeld River , Brest has been an important naval port in France for centuries. Brest, also known as the “Cité du Ponant”, is still the base of the French Atlantic fleet and an important trading port.

As the largest city in western Brittany, Brest is an important industrial and commercial center. The westernmost city in France is the seat of the Université de Bretagne Occidentale (German University of West Brittany) as well as other universities and research institutes.

Brest's climate is a temperate maritime climate influenced by the Gulf Stream . Characteristic for this climate are cool summers and mild winters. Frost rarely occurs, but wind almost constantly. The city belongs to a climate zone of the type Cfb (according to Köppen and Geiger ): warm, moderate rainy climate (C), fully humid (f), warmest month below 22 ° C, at least four months above 10 ° C (b). 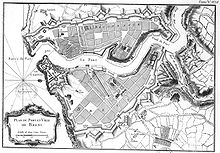 Site plan of Brest around 1904

The 1948 reconstruction plan that is still relevant today

At the place of today's Brest there was a fortified base from the end of the 3rd century during the Roman times , which served the coastal protection and was called Gesocribate . In the 5th century British tribes immigrated from England, after whom the country was named Brittany. Later a fort was built here against the attacks of the Normans . With Brittany, Brest came under the suzerainty of the English in the 12th century, but in 1202 it came back under French suzerainty.

With the beginning of modern times, the city experienced an upswing due to overseas trade. In 1593 Brest was granted city rights by King Henry IV . In 1631 Cardinal Richelieu made Brest a military port and had the naval arsenal built there for the Flotte du Ponant . In 1683 the complex was expanded into a fortress by Vauban . On June 18, 1686, a delegation from Siam arrived here and traveled on to King Louis XIV in Versailles, an event that is still remembered today by the name of the city's main street, Rue de Siam. In 1749 the Brest " Bagno " (penitentiary) was set up, a labor camp on the site of the Naval Arsenal. It could hold up to 3700 convicts and existed until 1858. The main building of the Bagno, built in 1750/51 by the builder Choquet de Lindu , with a facade of 254 m in length, was one of the characteristic buildings of old Brest before the Second World War. The inmates made up around 10% of the city's population and played a major role in Brest's life. In addition to shipbuilding work, the prisoners also carried out earthworks in the harbor basin and on the canal from Nantes to Brest . In 1752 a naval academy was established in Brest. The naval arsenal was also known for its powerful cannon, which announced the opening and closing of the arsenal area every day - from which the French phrase tonnerre de Brest (something like: mighty thunderstorm) is derived.

In 1789 the people of Brest were initially enthusiastic about the French Revolution . However, her sympathies were increasingly directed towards the Girondins and a federal state structure, which brought her the displeasure of the Jacobins , who sent 70 citizens under the guillotine. After the fall of Robespierre, the city was again administered by Girondists. However, the port soon lost its importance due to the continental blockade, trade lay idle and an economic crisis was the result, which set the city back. Under Napoleon , the construction of the navigable Canal de Nantes à Brest , with which the sea blockade should be bypassed, began. With the industrialization one found connection to the economic development, for example through the construction of the bridge over the Penfeld in 1856 or the construction of the Brest train station in 1865; the city was then 18 hours by train from Paris. The prison was abandoned in 1858, instead the inmates were shipped from Bordeaux directly to convict islands overseas.

During the First World War , Brest was an important supply port for US troops in Europe in 1917/1918 . In the post-war period, the port was constantly expanded, and in 1930 the Plougastel facilities were added. During the Second World War , the German Wehrmacht took Brest on June 19, 1940 and made it one of the most important bases on the Atlantic Wall , where the 1st U-Flotilla and a naval hospital were also stationed. In 1941/1942 the two battleships of the Scharnhorst class and the cruiser Prinz Eugen were also moored here . A maritime emergency squadron was also set up in Brest . To protect the submarines , a submarine bunker was built right in front of the former Ecole Navale , the building of which now served as the headquarters of the submarine flotilla , which was 192 m wide, 333 m long and 17 m high. The slab thickness was 6.20 m.

In January 1944, Hitler named all important port cities in the west - including Brest - as " fortresses ", which was primarily symbolic. In the OKW orders of February 1944 for the defense of fortresses, it was ordered to fight “to the last man” and not to surrender under any circumstances. After landing in Normandy , Brest was besieged by the Allies for 43 days in the Battle of Brittany (making it one of the longest-besieged places) before the commander Hermann-Bernhard Ramcke surrendered.

The city was badly damaged by the fighting and bombing of the Allies and had to be rebuilt from scratch according to the plans of Jean-Baptiste Mathon . In 1961, the reconstruction was essentially complete. Since little was left of the historical structure, Brest today gives the impression of a largely faceless planned city with concrete buildings. Economically one also had to reorientate, since the importance as a naval port declined; instead, the service sector and modern industries as well as marine research experienced an upswing. The establishment of the Université de Bretagne Occidentale in 1960 also contributed to its importance as an educational center .

Brest is the seat of the sub-prefecture of the Arrondissement of Brest.

Brest has ten parish partnerships with:

The port of Brest from the Pointe des Espagnols from

Founded in 1966, SMDO Industries , the world's third largest manufacturer of power generators, has its headquarters in Brest.

Two toll-free motorways connect Brest with Rennes (RN 12) and with Nantes (RN 165). The national route RN 265 creates a connection to the east. A section of this motorway is the bypass of the city.

The Brest train station was built between 1936 and 1937 in Art Deco style and is located on the Paris – Brest railway line . It is served daily by several TGV trains that connect it directly to Paris Gare Montparnasse . The fastest of them make the distance in 3 h 25 m. With the Bretagne à Grande Vitesse project, it is planned to reduce the travel time to 3 h 10 m by 2020.

Local transport in Brest is served by a tram line, 14 bus lines and, since 2015, a cable car, the Téléphérique de Brest . There are also 7 dial-a-bus routes to smaller or remote outlying areas of the agglomeration, as well as two special shuttle bus routes to Guipavas Airport and the naval base. The tram line, under construction since 2009, serves a total of 27 stops over 14.3 km. It connects the western and eastern parts of the city and was put into operation with an inauguration ceremony on June 23 and 24, 2012. In this context, the entire bus network of the agglomeration has been redesigned and adapted to the new tram. A second line, which will also connect the train station and the port, is currently being planned.

The port of Brest, which is mainly used as a cargo port, also offers passenger connections to the Crozon Peninsula and the Iroise Islands .

The Brest airport is located on the territory of the municipality Guipavas and denies 45% of passenger traffic in Brittany. A new terminal in the form of a Manta has been in operation since December 2007, increasing the passenger capacity to 1.8 million per year.

In the city is the Brest Arena , a multifunctional arena opened in 2014 with up to 5,500 seats that is regularly used for sporting events and concerts. Among other things, the arena was one of eight venues for the men's handball world championship 2017 in France and in December 2018 it was also one of the venues for the 2018 European handball championship for women .

Municipalities in the Arrondissement of Brest