The title of this article is ambiguous. Further meanings are listed under Nantes (disambiguation) .

The temporary capital of historic Brittany was split off in 1941 with the Loire-Atlantique department and is therefore not part of the modern administrative region of Brittany .

In October 2010, the city of Nantes became the fourth city to receive the European Green Capital 2013 award . On January 31, 2017, Nantes was awarded the honorary title of “ Reformation City of Europe ” by the Community of Protestant Churches in Europe as the 77th city .

The Erdre and Sèvre flow into the Loire near Nantes . The city is located about 55 kilometers east of the Atlantic and is mostly north of the Loire.

The climatic conditions of Nantes are determined by its proximity to the Atlantic: the winters are mild and humid, the summers warm and not too dry. The annual mean temperature is 11.9 ° C.

Near the city is the geographic center of the land hemisphere of the globe.

Description : In red a golden boat moving to the right with three golden masts and yards, on it five hermelin-colored square sails , the stern mast with only one, and golden pennants. The base of the shield is green and the head of the shield is studded with five large ermines. 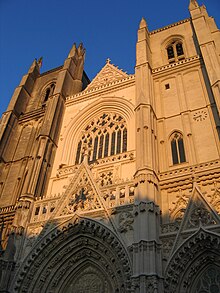 Between 900 and 600 BC Remains of settlements on the banks of the Loire have already been proven. Around 500 BC BC settled in the region around today's Nantes Celts . As a result, the place became the capital of the Celtic tribe of Namneter. In the Gallic War , the area was 56 BC. BC subject to Roman rule under Caesar . In the year 50 BC The Roman port city Portus Namnetus was founded in the area of ​​today's city of Nantes , which was named after the Namnetern resident there. In the third century, the residents converted to Christianity . Around the year 285 the Saxons invaded the region. Since the 4th century Nantes was the seat of a diocese .

Bretons are believed to have come from the British Isles in the 5th and 6th centuries, but written and archaeological evidence of such settlements is poor. Charlemagne subjugated Brittany, which revolted under his successors. The first pillage by the Loire-Normans is recorded for the year 843 . Nominoë , who ruled Brittany at the time, conquered Nantes in 850 and had its walls razed because the city had allied itself with Charles the Bald . In 919 Nantes fell to the Normans, who were driven out again in 936. Around this time the rivalry between the Counts of Nantes and the Counts of Rennes began , who fought for sovereignty over Brittany.

In 1154 Nantes was handed over to Henry II , who ascended the English throne that year. In 1203 the county of Nantes came to an end. Peter Mauclerc was appointed Duke of Brittany by King Philip II of France in 1213 and made Nantes his capital. He surrounded Nantes with fortifications and defended the city against Johann Ohneland . The city, which remained the capital of Brittany until 1689, also developed into its important seaport from the 14th century. During the War of the Breton Succession (1341-64), the city was first on the side of Johann von Montfort , but surrendered in November 1341 to Karl von Blois . Ultimately, however, the Montforts were victorious, became dukes of Brittany in 1364 and chose Nantes as their main residence. In 1460 the university was founded in Nantes by Duke Francis II of Brittany and confirmed by Pope Pius II . After the death of Anne de Bretagne (1477-1514), Brittany was incorporated into the French crown domain. Epidemics recurred in Nantes during the 15th and 16th centuries .

Modern times up to the 19th century

In 1560, King Franz II granted Nantes a municipal constitution. During the Huguenot Wars (1562–98), the city, which was hostile to Protestantism , joined the Catholic League and did not surrender to King Henry IV until 1598. With the Edict of Nantes ( Edict of Tolerance ) by Henry IV on April 13th Adopted in 1598, the decades-long oppression and persecution of the Huguenots by the Catholic Church and the French state ended. This had its climax in 1572 in the so-called Bartholomäusnacht . However, the Edict of Nantes, which allowed the French Calvinists to practice their religion freely, was revoked by Louis XIV in 1685 ( Edict of Fontainebleau ).

In 1626 Henri de Talleyrand-Périgord , Count of Chalais, was executed in Nantes for a conspiracy against Cardinal Richelieu . Nicolas Fouquet was arrested here in 1661 at the instigation of Louis XIV . In 1718, the regent Philip of Orléans had some Cellamare conspirators executed in Nantes.

Due to its favorable location on the Loire estuary, the city experienced an economic boom in the 18th century and became the most important port city in France. It owed this to the Asian trade, but above all to the flourishing slave trade with America. Around half of all French slave ships left Nantes. A memorial for the abolition of slavery was inaugurated on the Quai de la Fosse, the landing stage for slave ships .

The area of ​​the Vendée uprising , which turned against the increasingly radical measures of the French revolutionary government , also included the area around Nantes. During the reign of terror , the Vendée uprising was bloodily suppressed by the forces of the National Convention. Even after the uprising had been put down, the Paris government had the so-called " Hell Columns " (French colonnes infernales ) plundered and pillaged, thus systematically devastating the country and retaliation against the civilian population. Carrier , the envoy of the Parisian revolutionary government, allegedly had 16,000 "opponents of the revolution" executed in and around Nantes in 1793, primarily through the mass drownings in the Loire, known as Noyades or the baptism of Nantes .

In 1826, the world's first public bus line was inaugurated in Nantes . In 1832 the Duchess of Berry was arrested in Nantes after trying to instigate a revolt against King Louis-Philippe in the Vendée . In 1903, the Nantes transporter ferry, the fifth known ferry of this type in the world, was opened and was demolished in 1958.

Nantes was the destination of the outward journey in the world's first motorcycle race . On September 20, 1896, eight participants carried out a competition that led from Paris to Nantes and back again. M. Chevalier won on a Michelin Dion.

In June 1940, took place in the course of the campaign in the west , the occupation of the city by German troops . On October 20, 1941, the German city ​​commandant Lieutenant Colonel Karl Hotz was killed by the Resistance ; 48 hostages were executed as an act of revenge  (the main thoroughfare, Cours des 50 Otages , commemorates this tragedy).

From 1943 the Navy maintained a naval hospital in the city. Between September 16 and 23, 1943, Nantes was badly hit by Allied air raids. 1467 people died and around 2500 were injured. The city suffered severe damage. After the Allies landed in Normandy in early June 1944, the town was evacuated by the German occupation forces on August 12, 1944.

When the regions of France were created in June 1941 by the Vichy government , the Loire-Atlantique department and thus Nantes, the former capital of Brittany, were assigned to the Pays de la Loire region and thereby separated from the new region of Brittany .

After the Second World War, the northernmost arm of the Loire was filled in and the railway to Saint-Nazaire was re -routed underground. This made it possible to redesign the inner city.

In 1962 the University of Nantes was reopened. The decline of the shipbuilding industry in the late 1980s plunged Nantes into a deep crisis. In 1989 the last shipyard was closed. The result was high unemployment and social and cultural decay (highest alcoholic rate in France). The TGV connection with Paris and a strong outsourcing of the national administration from Paris to the province marked the beginning of the revival of Nantes. The reintroduction of the tram and the organization of numerous cultural festivities ( Rendez-vous de l'Erdre , Royal de Luxe ) also contributed to the renewed rise of the Atlantic metropolis. Nantes has left its competitors Rennes and Angers far behind; Bordeaux is now the new benchmark . There are efforts to reshape and unite the region in order to highlight the cultural similarities. The last unofficial referendum in 2003 clearly pointed in this direction.

From 1989 to 2012, Jean-Marc Ayrault was Mayor of Nantes and also a member of the National Assembly . He resigned as mayor just over a month after his appointment as prime minister , his successor was Patrick Rimbert (PS). Johanna Rolland (PS) has been the first female mayor of Nantes since 2014 .

In Wolfram von Eschenbach's novel Parzival , the action also takes place in the city of Nantes, east of the W ALDES of Brocéliande (La Forêt de Brocéliande, Brizljan ), from. Allegedly the Artus Court is located there. 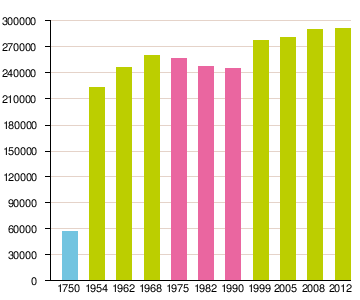 The importance of Nantes as a seaport decreased with the size of the ships. The port is hardly of any importance today; the large freighters unload their goods 50 kilometers west of Nantes in St. Nazaire . In the 19th century, the navigable Canal de Nantes à Brest was built, which is now mainly used for tourism by pleasure boats and houseboats . The transporter bridge across the Loire was decommissioned in 1955.

Important branches of industry are the steel , glass , textile , sugar industries and the food industry, for example Saupiquet was founded here in 1891 . Numerous pastry companies of international renown were founded in Nantes: BN ( Biscuiterie nantaise ) and LU ( Lefèvre-Utile ) are two well-known examples. There is an Airbus plant on the southern outskirts of Nantes .

Nantes had had a tram since 1885 , the vehicles of which were initially powered by compressed air . The electrification of the lines took place in 1913. Operation ceased in 1958, as most trams in France were shut down in the post-war period. In 1985 a new tram network was opened, the first new installation in France.

Since November 2006, the city has had a busway with line 4 from Foch Cathédrale and the castle in a south-east direction to Porte de Vertou. This bus line, a Bus Rapid Transit System, is consistently run on its own lanes and has absolute priority at intersections.

The Nantes Atlantique airport in the southwest of the city is well utilized. In January 2018, after protests, it was decided not to pursue plans for a new building.

The city is a railway junction, it is on the Tours – Saint-Nazaire railway line ; the main line towards Saintes- Bordeaux, as well as several regional lines, begin at Nantes station . From Paris , Nantes can be reached in a good two hours by TGV .

Around 54,000 students study in Nantes, around 36,000 at the University of Nantes . There are also several private universities including Audencia Nantes .

The most widely read regional daily newspaper is Ouest-France , although it is published in Rennes . In addition to other newspapers and magazines, two television channels and a large number of radio stations broadcast from Nantes.

The most important sports team in Nantes is the multiple (most recently 2001) French football champions FC Nantes .

In September 2012 the European Swingolf Championship took place on the local 18-hole course.

The Orchester national des Pays de la Loire , a professional symphony orchestra, has existed since 1971, with half in Nantes and Angers . Nantes also shares an opera with Angers, which is set in the Théâtre Graslin .

Several musicians come from Nantes, such as Dominique A , the music group Tri Yann or the hip-hop group Tragédie.

Nantes has several important museums, including the Musée d'Arts (with the Chapelle de l'Oratoire), a Jules Verne museum , the Musée Dobrée , the Museum of the History of Nantes in the Castle of the Dukes of Brittany and a natural history museum . The Lieu Unique, a cultural center in the former biscuit factory LU (Lefèvre-Utile), shows changing exhibitions of modern art .

The classical music festival La Folle Journée takes place from late January to early February and attracts many international guests. On the first weekend of September, the Rendez-vous de l'Erdre , a large jazz festival on the banks of the Erdre, takes place every year. Estuaire is an art project along the Loire Estuary that took place in 2007, 2009 and 2012.

→ Main article : List of sons and daughters of the city of Nantes

Municipalities in the Arrondissement of Nantes