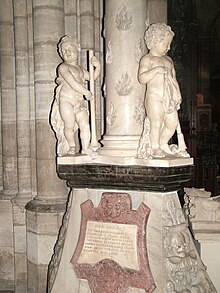 Franz II was the eldest son of Henry II of France and his wife Catherine de Medici . On April 24, 1558, he married 15-year-old Maria Stuart , Queen of Scotland . Maria Stuart was also the Catholic contender for the English throne.

Suffering from a weak constitution from childhood, he was considered to be less intelligent and easily distracted. Francis II died on December 5, 1560 in Orleans of complications from an ear infection.

When his father died on July 10, 1559, Franz, who was only 15 years old, took over the government of France. Because of his age and his not very strong-willed nature, Franz II was under the influence of Duke Franz I von Guise , the most successful French general at the time, until his untimely death in 1560 . Guise knew how to steer the young king so that he practically left the government to him.

After the death of Franz II on December 5, 1560, his younger brother Karl took over as Karl IX. the French throne. The Queen Mother Catherine de Medici became regent and disempowered the Duke of Guise by approaching the Bourbons and Protestants. The Duke of Guise then organized a massacre of the Protestants ( Vassy bloodbath ). This began a series of wars of religion, the so-called Huguenot Wars .

Francis II, who died in the Hotel Groslot in Orléans, was buried in the cathedral of Saint-Denis near Paris. When the royal tombs of Saint-Denis were sacked during the French Revolution , his grave was opened and looted on October 17, 1793, and his remains were buried in a mass grave outside the church. During the restoration after 1815, all remaining remains were exhumed in the mass grave. Since it was no longer possible to precisely assign them to the individual individuals, they were buried in a common ossuary in the cathedral's crypt. Only the heart urn of the former tomb remains.