This article deals with the French regent and queen mother; on the blessed of the Catholic Church see Luise von Savoyen (Blessed) . 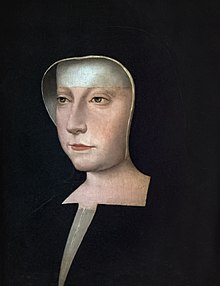 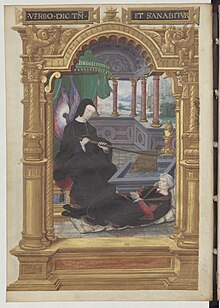 The regent takes over the rudder of state ; anonymous painter of the 16th century

Luise was the daughter of Philip II , Count von Bresse from the House of Savoy , who later became Duke of Savoy . Through her mother Marguerite de Bourbon she was a niece of Pierre , seigneur de Beaujeu, later Duke of Bourbon .

At the age of twelve she was married to Charles de Valois-Orléans , Count of Angoulême , a great-grandson of Charles V of France. When the count died in 1496, Luise had two children, Margarete (* 1492) and Franz (* 1494). The accession to the throne of childless Ludwig XII. made Franz the likely successor to the French throne. Luise brought her children to court and received Amboise as a residence. From now on she lived in fear that Ludwig might have a son, so there was a secret rivalry between her and Queen Anne de Bretagne .

Finally, after the death of Louis XII, her son was born. King on January 1, 1515. From him Luise received the county of Angoulême , which was raised to the rank of duchy . In addition there was the Duchy of Anjou and the county of Maine . From 1515 until her death, she exerted significant influence on the government.

In the critical situation after the Battle of Pavia in 1525, she was up to the emergency and ensured that order in the kingdom was maintained. She was very clever at separating Henry VIII of England from the imperial alliance.

On the other hand, she was also passionate about her own interests. When her niece, Duchess Suzanne de Bourbon , died without descendants in 1521 and her widower Charles III. de Bourbon legitimately laid claim to the duchies of Bourbon and Montpensier , it seems to have played a major role in Francis drawing them in for the main Bourbon line, driving Charles to the point of treason.

Luise acted with Margaret of Austria concluded on August 5, 1529 called. Ladies Peace of Cambrai out of the war between her son Francis I and Emperor Charles V ended.

When Luise died in 1531, Franz reintegrated her territories into the royal estate, namely the Bourbonnais , Beaujolais , Auvergne , Marche , Angoumois , Maine and Anjou.

She was buried in the tomb of the French kings, the Saint-Denis basilica . When the royal tombs of Saint-Denis were sacked during the French Revolution , their grave was opened and looted on October 20, 1793, and their remains were buried in a mass grave outside the church. Your heart is kept in the Notre-Dame de Paris cathedral.