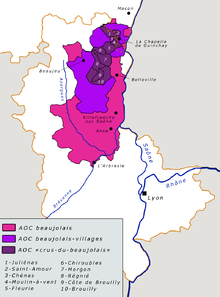 The Beaujolais wine region. The Coteaux du Lyonnais wine-growing region immediately west of Lyon is not on this map.

The north of the city Lyon located wine-growing region Beaujolais is geographically although part of Burgundy , but is due to the significantly different characteristics of the wines own wine-growing region. The red wine is made from the Gamay grape variety, which is not permitted in Burgundy for high quality. The Beaujolais bears its name after the reign of Beaujeu , but the center of the area today is Villefranche-sur-Saône . Administratively, the Beaujolais belongs to the Rhône department and thus to the Auvergne-Rhône-Alpes region .

Before the reorganization of the French municipalities, Beaujolais, up to around 1010 high on Mont Saint-Rigaud, comprised 72 small communities that were roughly divided into two areas.

The south is described by the corner points Chazay-d'Azergues , Pontcharra-sur-Turdine , Chamelet and Villefranche-sur-Saône . The area lies in a lovely hilly landscape at heights between 350 and 400 m. In the west, the area is protected from excessively humid air by a chain of hills with heights between 650 and 800  m . The soil was created by erosion and usually consists of a mixture of lime and clay. The soils are quite poor and dry out quickly.

The north is defined by more pronounced hills and better soils based on granite rock . From this area, which begins north of Villefranche-sur-Saône and ends directly under the Mâconnais area , the quality wines of the Beaujolais-Villages and the ten crus , i.e. those ten appellations with a special status, come from.

In total, the Beaujolais covers around 23,000 hectares of vineyards, extends over a length of around 50 km in north-south direction and is a maximum of 15 km wide. The Saône forms the eastern edge of the area.

The Beaujolais is since 2018 by the UNESCO as "Geopark Beaujolais" as a UNESCO Global Geopark excellent.

Three climates can overlap in this region: a continental tendency, an oceanic tendency and a Mediterranean tendency. Throughout the year, the weather can quickly change in favor of one or the other tendency. Due to the pronounced hilly landscape, these effects can be strongly buffered microclimatically. This explains that the northern municipalities have the best vineyards in supposedly less suitable locations. The average rainfall is approx. 750 mm / year.

The appellation “Beaujolais” can be used throughout the area. The wine may be called Beaujolais Supérieur if the sugar content of the must suggests that the alcohol content will be at least 0.5% higher. A total of 10,500 hectares are planted in the Appellation d'Origine Contrôlée (AOC) Beaujolais and are marketed as such. The base wines of Beaujolais Primeur are also taken from this appellation .

38 municipalities have the right to develop wine in the AOC "Beaujolais-Villages" . This corresponds to a vineyard area of ​​6,250 ha.

On the northern edge of the Beaujolais Villages area, there are ten communal appellations, most of which are named after communities. These so-called crus (plants) of the Beaujolais represent the qualitative peak of the production and, unlike the other wines of the Beaujolais, have a shelf life. With these wines you can also differentiate between the individual vintages. The Beaujolais crus are:

In the Beaujolais red wines exclusively from the Gamay - Vine produced that yields very fruity, sometimes pale reds. These wines can be enjoyed with a large number of dishes in summer, even slightly chilled. The cultivation of the Pinot noir grape is allowed, but is no longer practiced in Beaujolais today.

Red wine is usually made by partially mashing the grapes and then placing them in a container to ferment. In Beaujolais, the grapes are left whole and burst through the fermentation process alone (→ Macération carbonique ). The fermentation can possibly last until the spring after the harvest and removes a maximum of color and tannins from the Gamay . Beaujolais wines should be drunk young, but Beaujolais, which are not primeurs, can withstand storage for several years. In particular, the wines of the Beaujolais Villages should have matured for at least a year before consumption.

The Beaujolais Primeur (also Beaujolais nouveau ) was the first wine that was allowed to be sold in the year of its production. Traditionally, this happens on the third Thursday in November.

On November 13, 1951, the winemakers of Beaujolais fought for an exemption from French wine law. This allowed them to put their new wine on the market from December 15th. This regulation applied for the following 15 years. In 1967 the first sale date was set to November 15th and in 1985 the third Thursday in November was set as the fixed date for the start of sales of the Beaujolais Nouveau .

This form of marketing played a decisive role in promoting Beaujolais as a wine-growing region around the world and was introduced by winemaker Georges Duboeuf (1933-2020) in the early 1950s (1953). It has contributed to the region's reputation for producing lower quality wines. In 2002 the proportion of primeur wines had risen to over 50% of total production.

Since the classic carbon dioxide maceration is too slow, the wine is prepared very quickly using tricks. Such a wine can give short-term pleasure due to its overwhelming fragrance and fruitiness, but it is far from the best that the Beaujolais wine region has to offer.

The term Primeur is not synonymous with Beaujolais. Primeur wines can also be produced in other parts of France. At the height of the primeur wave, young vegetables were also marketed in a similar way.

Pot Lyonnais, a serving bottle in the Beaujolais

A specialty in Beaujolais is the Pot Lyonnais . This serving bottle has a particularly thick glass bottom, which makes it possible to keep the wine cool longer on the table. To do this, the bottle is cooled in the freezer beforehand.

White wine plays a subordinate role in Beaujolais and only accounts for around 1% of production. The white wine grapes are Chardonnay grapes, but are relatively insignificant for the fame of Beaujolais, and so white Beaujolais wines are extremely rare and practically unknown abroad.