The Rhône department is the French department with the atomic number 69. It is in the southeast of the country in the region Auvergne Rhône-Alpes and was named after the river Rhône named.

Since the spin-off of the metropolis of Lyon , the Rhône only touches the département in a few shorter sections in the southeast and south, where it forms the border of the département - coming from the east and flowing down to the south. Coming from the north, its tributary Saône forms the eastern border of the northern half of the department and flows into the Rhone in the city center of Lyon.

To the west of the Rhone and Saône are the hilly landscapes of the Beaujolais with the 1010  m high Mont Saint-Rigaud as the highest peak in the north of the department and the Monts du Lyonnais south of it.

The capital of the department and the second largest metropolitan area in France is the megacity of Lyon .

The Rhône department borders on the Ain , Isère , Loire , Saône-et-Loire and the metropolis of Lyon.

On January 1, 2015, the communes of the Communauté urbaine de Lyon were spun off from the Département Rhône, at the same time the communal association became a regional body with special status and designation Métropole de Lyon , which performs the tasks of a department and a municipal association.

Description : Split in red and gold is a silver lion in front under a blue shield head with three golden lilies and behind a black, red armored and tongued lion, covered by a red five-lipped tournament collar . 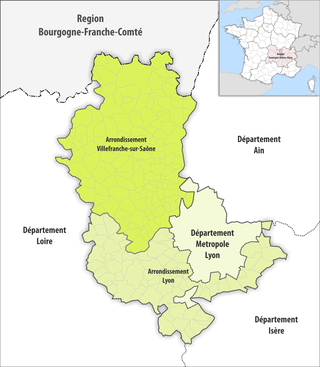 Communes and arrondissements in the Rhône department

The Département Rhône is divided into two arrondissements (including the part of the arrondissement Lyon without the area of ​​the Métropole de Lyon) and 208 municipalities.