The Charente-Maritime [ ʃaˌʀãtmaʀitim ] is the French department of 17 with the ordinal number It is located in the west of the country on the Atlantic coast in the region Nouvelle-Aquitaine and is named after the river Charente and after his maritime named location. The capital is the old fortified city of La Rochelle . From its establishment in 1790 until 1941, the department was called Charente-Inférieure .

La Rochelle , the former capital of the province of Aunis and today's administrative center and largest city in the department

The most important rivers are the Sèvre Niortaise , predominantly northern border to the Vendée department, the eponymous Charente , which crosses the department in a westerly direction and flows into the Atlantic behind Rochefort , its right tributary Boutonne , further south the Seudre , whose estuary becomes extensive oyster- and mussel farming is used, and in the southeast the Dronne , which forms the short border to the Dordogne department.

The area around Saintes , especially that north of the city in the center of the department, forms the historic province of Saintonge .

Description: In the coat of arms, split in blue and red, a silver bishop's cap is accompanied by three (1; 2) golden lilies in the front and a golden crowned dove facing the other way round .

The most populous communes in the Charente-Maritime department are:

The Charente-Maritime department is divided into 5 arrondissements , 27 cantons and 463 communes : 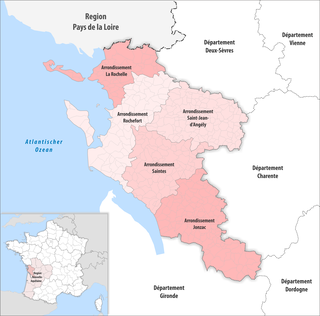 Communes and arrondissements in the Charente-Maritime department

Until 1790, the historical provinces of Aunis and Saintonge and a small proportion of the provinces of Poitou and Angoumois were located in the area of ​​today's department

Observation station: Pointe de la Coubre, 150 m from the sea, at the exit of the Gironde

Departments in the region Nouvelle-Aquitaine