Doubs [ you ], officially du Doubs is the French department of 25 with the ordinal number It is located in the east of the country in the Region Bourgogne Franche-Comté and after the river Doubs named. The department covers an area of ​​5234 km² and has 539,067 inhabitants (as of January 1, 2017). The capital is Besançon .

The most important river in the department is the eponymous Doubs . Its main tributaries are the Loue , which runs through the southwest of the department, and the Dessoubre, which irrigates the eastern region . Only the north, the area between the Ognon, which forms the north-western border, and the lower reaches of the Doubs, represents low hill country, while the remaining, about four-fifths of the department, especially the south-east, is mountainous and crossed by four limestone chains of the Jura . The Montagnes du Lomont are the lowest of these chains; they are east of Baume-les-Dames , rise to 835 m and have an east-west orientation. Deep in the south of the department near the Swiss border is its highest point, the Mont d'Or (1463 m). Other high mountain peaks are the Morond (1419 m) and the Gros Crêt (1419 m). The largest lakes include Lac de Saint-Point (4.2 km 2 ), Lac de Remoray (0.95 km 2 ) and Lac des Brenets (0.8 km 2 ). The climate is temperate continental and rainy; it shows a considerable difference between summer and winter temperatures.

The Sequaner settled in the area of ​​what is now the Doubs department in ancient times . These were in the 50s BC. Submitted to the Roman Empire by Gaius Iulius Caesar . Augustus united the country with Gallia Belgica . It was under Roman rule until the 5th century, when it came under the Burgundian rule . From the 11th century it belonged to the county of Burgundy and to the Dukes of Burgundy in the late Middle Ages . With the marriage of the Burgundian heiress Maria to Maximilian von Habsburg , the area fell to the Spanish line of the Habsburgs in 1477 , which had to cede it to France in the Peace of Nijmegen in 1678.

Description: In the blue and gold coat of arms, divided by a wavy cut , there is a growing golden lion with a crown, red tongue and claws between seeded golden shingles and a blue wavy bar below .

The most populous municipalities in the Doubs department are:

The Doubs department is divided into 3 arrondissements , 19 cantons and 573 communes : 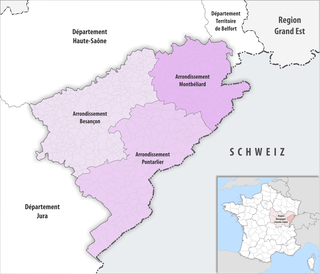 Communes and arrondissements in the Doubs department

Departments in the Region Bourgogne Franche-Comté