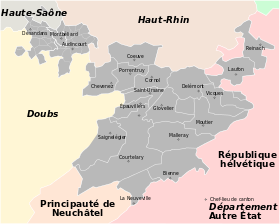 The Mont-Terrible department was a 1793 to 1800 for centralized system of the First French Republic belonging department , which on the territory of cantons majority today Bern , Jura and Basel-Country in Switzerland is.

The département was created on March 23, 1793 through the annexation of the Raurak Republic , decided by the National Convention , which had only been formed four months earlier from the dissolved Principality of Basel . The name of the department is derived from Mont Terri (Pultberg) south of Cornol in the Ajoie . The area covered the northern part of the previous duchy and was dominated by Catholicism . While Porrentruy was the main town ( préfecture ) of the department, the military leadership was in Delémont . Territories not added to the département were the Schliengen Landvogtei on the right bank of the Rhine and Leimental and Kleinlützel in Solothurn .

Also in 1793 France annexed the Württemberg county of Montbéliard , which was initially connected administratively to the Haute-Saône department from October 15, 1793 . Duke Friedrich Eugen did not finally come to terms with the loss until three years later, when he signed the Treaty of Paris on August 22, 1796 and was awarded territories in southern Germany as compensation. The Lutheran inhabitants of the former county wanted to belong to the Mont-Terrible department and on the 1st  Ventôse of the year V (February 19, 1797) Montbéliard was incorporated into the Mont-Terrible department. On March 1, 1797, the cantons of Audincourt, Désandans and Montbéliard, which had been created in the meantime, were reallocated according to the wishes of the population. The department now had one larger and two small exclaves and around 55,000 inhabitants.

After the Peace of Campo Formio , on the 30th  Frimaire of the year VI (December 20, 1797), the predominantly Reformed territories of the Principality of Basel, which had not yet been formally annexed, were assigned to the Mont-Terrible department. This affected the area of ​​the Moutier-Grandval provost , the lordships of Diesse , Erguel and Orvin and the city of La Neuveville . Finally, on the 24th  Pluviôse of the year VI (February 12, 1798), the city of Biel also joined.

The French consulate issued on 17 February 1800 a law on the dissolution of the felt to be too small Mont-Terrible (with about 110,000 hectares, it was significantly less than the department average of 360,000 ha) and hit the territory of the Haut-Rhin to. By resolution of the Congress of Vienna on March 20, 1815, the area (with the exception of the exclaves around Montbéliard) came to the Swiss cantons of Bern and Basel .

In 1797 the département had 77,045 inhabitants, who were distributed as follows:

The Mont-Terrible department was divided into districts and cantons as follows :