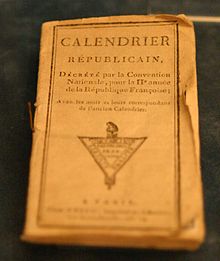 Copy of the French Revolutionary Calendar in the History Museum of Lausanne.

The French revolutionary calendar , also known as the republican calendar ( French calendrier révolutionnaire français or calendrier républicain ), was created as a result of the French Revolution of 1789 and was officially in force from September 22, 1792 to December 31, 1805 .

In descriptions of the revolution, individual dates are used to designate certain events according to the revolutionary calendar, such as the 9th Thermidor (the end of the Jacobin reign of terror) or the 18th Brumaire (the seizure of power by Napoleon).

On July 15, 1789, one day after storming the Bastille , the An I de la liberté ("Year One of Freedom") was proclaimed, but initially only unofficially according to this calendar, for example dated by revolutionary newspapers such as the Moniteur . Since the Gregorian calendar was otherwise retained, year I lasted only 5½ months. January 1, 1790 was the beginning of year II of freedom. This year count was taken up again in the positivist calendar in 1849 .

On September 22, 1792 the National Convention abolished the monarchy; At the same time, he decided to start the "Year I of the Republic" (An I de la République Française) on this date and to oblige the state institutions to use the new, changed year. On October 5, 1793, the National Convention decided to renew the counting of days and months. This 2nd republican calendar came into effect on November 24, 1793 (4th Frimaire II) retrospectively from September 22, 1792. The part of the year 1793 up to September 21, which, according to the previous orientation on the Gregorian calendar, had counted as year II, was assigned to year I. For dates before September 22, 1792, the dating of the Gregorian calendar was still used. The French revolutionary calendar was therefore not proleptic , did not point back to the past.

The republican calendar lasted until December 31, 1805. Napoleon I reintroduced the Gregorian calendar in 1806. In the parts of Europe that belonged to French national territory during the Napoleonic period , the revolutionary calendar was binding in public affairs.

In 1871 he was used again during the left-wing radical Paris Commune . Today authors occasionally use dating according to this calendar to give books about the revolution a certain historical tone.

The revolution had established the separation of church and state in France, so the new calendar should no longer contain any Christian reference (e.g. the birth of Christ, Christian holidays). The old dating according to the Gregorian calendar was disparagingly called ère vulgaire (EV instead of AD ) in revolutionary regulations, i.e. common era . In addition, the principle of " reason " should be expressed in the extensive adaptation to the decimal system .

The calendar introduced a ten-day week. As a result, there was only one day off every ten days (plus a few public holidays at the end of the year in September), which made the calendar less popular. People didn't want to have every fourth day off (Sunday) taken from them.

According to the revolutionary calendar, the year had 12 months of 30 days each with 3 decades (10 days). There were also five additional days ( six in leap years ).

During the entire period of validity of the revolutionary calendar, the beginning of the year was fixed on the equinox day in autumn, more precisely at midnight before the true autumn equinox - based on Paris. Since future dates could not be determined without observing the sky and this did not allow for any fixed rules, on the 7th Fructidor III (August 24, 1795), a commission chaired by math teacher Gilbert Romme proposed leap year rules based on the Gregorian calendar. Romme was based strongly on the Maréchal calendar , which had already appeared at the end of 1787 and which had brought its editor Sylvain Maréchal to prison. The leap days should be placed at the end of the republican years divisible by four. The Gregorian rule of exceptionally normal years should be carried over to the new calendar. In addition, either every 3600th or every 4000th year should not be a leap year. This would have resulted in an average year length of 365 days 5 hours 48 minutes 48 seconds or 50.4 seconds (Gregorian: 365d 5h 49 ′ 12 ″), that is about two to three and a half seconds longer than the actual tropical year at that time . A four-year cycle should be called a Franciade .

The decree regulating leap years (années sextiles) was never enacted or implemented. The years III, VII and XI of the republic were "sextile years". Year XV was also intended as a leap year, but the abolition of the system at the beginning of 1806 ( 11th Nivôse XIV ) did this. 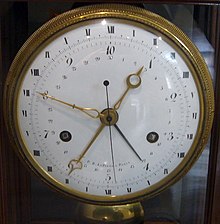 On August 1, 1793, with effect from July 1, 1794, units of measure and currency based on the decimal system ( meter and gram , liter, franc) were introduced. The calendar law of 4th Frimaire II (November 24, 1793) provided for a decimal division of time with the beginning of year III (September 22, 1794). The day should be divided into 10 hours (heure décimale) of 100 minutes (minute décimale) of 100 seconds (seconde décimale) . The implementation of this project would have made all existing clocks unusable. New gauges and weights were easy to make, but new watches were very expensive. On 18th Germinal III (April 7th, 1795) the convention decided to suspend the law on the decimal division of days; it never came into effect. Revolutionary watches with a dial divided into ten hours can still be found at auctions today.

The ten days of the decades were counted:

The 12 months of the republican calendar have been divided into four seasonal groups , based on a catalog of names drawn up by MP Fabre d'Églantine , starting with the anniversary of the republic as the first day of the year:

The six transition days at the end of the year ( called sansculottids ) were holidays.

The revolutionary calendar also included a new division of hours for the day and introduced decimal time . The day was divided into 10 hours of 100 minutes and 100 seconds each. The new second was thus slightly shorter than the old one (−13.6%), the minute significantly longer (+44%), while the revolutionary hour with its 2.4 times the length of the old hour represented a completely new unit of time.

The watch manufacturers Berthoud , Firstenfelder , Lenoir and Perrier built corresponding decimal clocks according to the new system (1 day with 10 hours; every hour has 100 minutes). Most of them had a dial showing the old and new day division side by side. During the Revolution, a large decimal clock was installed on the Tuileries in Paris, and another was placed in the conference room of the National Assembly.

Preserved clocks are in the Musée Carnavalet in Paris, in the Historical-Archaeological Museum in Orléans (le musée historique et archéologique, Orléans) , in the Museum of Art and History in Geneva ( Musée d'art et d'histoire (Geneva) ) and in the Clock Museum Abeler can be seen in Wuppertal.

Origin of the names

In the decree of October 5, 1793, the days of the decades were counted (premier, second, troisième ...); jour de la première (seconde, troisième ...) decade. The tenth day, which was intended as a day of rest, was given the name decadi. On October 24, the poet Fabre d'Églantine suggested naming the other days according to this pattern.

Following the example and to replace the Christian day saints , all days were given a proper name. The Decadis were named after agricultural implements, the Quintidis after domestic animals, and all other days - except in the Nivose - after plants (lists of names in the articles for the individual months ) .

Just like the days of the decades, the months in the first draft were simply counted (premier, second, troisième etc. mois de l'année) . Instead, Fabre d'Églantine suggested month names that referred to a typical aspect of the climate (for example December: nivôse "the snow-covered") or to important times in agricultural life (the harvest month of September: vendémiaire from Latin vindemia " grape harvest "). Since these names were closely linked to the French climate, this calendar, although its designers wanted it to be used universally, was of a very regional nature. For the supplementary days, which were initially called jours complémentaires , Fabre d'Églantine suggested the name Sansculottides . He also suggested the names of the days (instead of premier jour complémentaire …). On November 24, 1793, these proposals were accepted with minor changes. The sansculottides appear as sansculotides and the circumflex is dispensed with in the months with -ose .