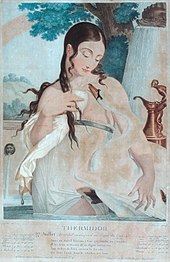 The Thermidor (German also hot month) is the eleventh month of the republican calendar of the French Revolution . He follows the Messidor , he follows the Fructidor .

The name was derived from Fabre d'Églantine from the Greek θερμός ( thermós ) 'warm, hot, heated, passionate' and δῶρον ( dõron ) 'gift'. The Thermidor is the second month of the summer quarter ( mois d'été ) and thus the eleventh month of the French revolution year. It starts around July 19th and ends around August 17th .

The deposition of Maximilien de Robespierre at the end of July 1794 is also known as Thermidor after this month . On 8th Thermidor (July 26th) he had threatened various members of the National Assembly, especially Joseph Cambon , in a speech with death. Many MPs in the National Assembly felt threatened by Robespierre's hints, so that their large majority decided on the 9th Thermidor to arrest Robespierre. The day after, the 10th Thermidor, he and twenty-one of his followers were executed, including Louis Antoine de Saint-Just and François Hanriot .

The Thermidor of the Russian Revolution

Leon Trotsky described the upheaval on the political level as the Thermidor of the Russian Revolution, which was marked by the rise of Stalin to sole power and the Moscow show trials . "The Soviet thermidor," he wrote in Revolution Betrayed , "we define as the victory of the bureaucracy over the masses."

“It is well known,” he said of the parallels Thermidor made in the French and Russian revolutions, “that up to now every revolution has triggered a reaction or even counterrevolution, which admittedly never threw the nation back to the point of origin, the people but always wrested the lion's share of his conquests. As a rule, the victims of the first reactionary wave are the pioneers, initiators and initiators who were at the forefront of the masses during the period of attack of the revolution; on the other hand, people of the second caliber come first, in league with yesterday's enemies of the revolution. Behind the dramatic duels of the ' luminaries ' on the open political stage, there are shifts in class relations and, what is no less important, radical changes in the psyche of the yesterday revolutionary masses ”(Chapter 5).

Like all months of the French Revolutionary Calendar, the Thermidor had 30 days, which were divided into 3 decades. The days were named after agricultural crops, with the exception of the 5th and 10th day of each decade. The 5th day (Quintidi) was named after a pet, the 10th day (Decadi) after an agricultural implement.

The 8th Thermidor II is to be determined .