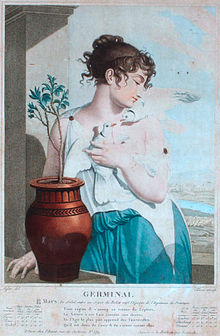 Allegory of the Germinal

The germinal (German also germ month) is the seventh month of the republican calendar of the French Revolution . It follows the Ventôse , it follows the Floréal .

The name is derived from the French germer (germinate). The germinal is the first month of the spring quarter ( mois de printemps ). It starts around March 21st and ends around April 19th .

Like all months of the French Revolutionary Calendar, the Germinal had 30 days, which were divided into 3 decades. The days were named after agricultural crops, with the exception of the 5th and 10th day of each decade. The 5th day (Quintidi) was named after a pet, the 10th day (Decadi) after an agricultural implement.

The 26th germinal was initially dedicated to the anemone, the 27th to the lilac. These days later switched roles.

The 7th Germinal XI is to be determined .

The year XI is in the table below, including the Gregorian year 1803 . Under the 7th (top line of the day) is the 28th. Since this is before the month transition (31st → 1st), March is meant.