This article covers the municipality of La Neuveville in the canton of Bern, Switzerland, for other locations see La Neuveville (disambiguation) .

La Neuveville (officially Neuveville until 1948 ), German Neuenstadt , is a political municipality in the Bernese Jura administrative district in the Swiss canton of Bern .

La Neuveville is 434  m above sea level. M. , 14 km southwest of Biel / Bienne (linear distance), about halfway between Biel and Neuchâtel , on the north-west bank of Lake Biel . The settlement covers the narrow strip of land by the lake below the mountainside at the southern foot of the Jura . La Neuveville includes the hamlet of Schafis ( Chavannes in French ), 440  m above sea level. M. on the shores of Lake Biel, south-west of Ligerz , as well as several individual farms. Above is the plateau of the Montagne de Diesse (German Tessenberg ).

The agricultural area of ​​the 6.8 km² municipal area comprises a section of the steep southern slope of La Côte and a 4.5 km long strip of shore on Lake Biel between Le Landeron and Ligerz. The western border is the Ruisseau de Vaux , a stream that flows from the Plateau de Diesse into Lake Biel. To the north, the municipality extends to the wooded anticline that separates the former moor of the Montagne de Diesse from Lake Biel. At the height of Sur la Roche is 926  m above sea level. M. reached the highest point of La Neuveville. In 1997, 15% of the municipal area was in settlements, 63% in forests and woodlands, 21% in agriculture and a little less than 1% was unproductive land. 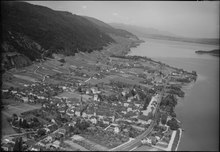 La Neuveville was founded in 1312 by the Basel prince-bishop Gérard de Vuippens as a new city near the border with the county of Neuchâtel to take in refugees from La Bonneville in the Val de Ruz , which had been destroyed shortly before by Rudolf IV . That is why La Neuveville was called La Bonneville in the early days. The place received its first city rights in 1318, and a peace alliance was signed in 1342. In 1388 the town signed a castle rights treaty with the city of Bern and in 1395 a pact with Biel , because it wanted to secure its independence from Neuchâtel. In the 16th century, the owner of Schlossberg Castle exercised not only his military function but also the office of mayor of La Neuveville.

From 1798 to 1815 the city belonged to France and was first subordinated to the department of Mont-Terrible , since 1800 with the department of Haut-Rhin . After the Congress of Vienna in 1815, it came to the Canton of Bern with the territory of the Principality of Basel and belonged to the Erlach district . In 1846 it became the capital of the newly established La Neuveville district .

Although La Neuveville only has 3739 inhabitants (as of December 31, 2018), the place is considered a city for historical reasons. 76.8% of the residents are French-speaking, 15.7% German-speaking and 2.9% Italian-speaking (as of 2000). The population of La Neuveville increased continuously until 1970. Due to the economic crisis during the 1970s, there was a significant decline. Since then there have only been relatively minor fluctuations.

The executive power of La Neuveville is the conseil municipal ( municipal council ). It consists of seven people including the mayor . At the moment (as of the election on October 30, 2016) it has the following party-political composition: FDP 3 seats, SP 2 seats, Forum neuvevillois 2 seats. Mayor is Roland Matti (FDP).

The legislature is called the conseil général ( General Council ) and has 35 members. They are elected by the people in proportion . The graphic on the right shows the distribution of seats in the General Council after the election on October 30, 2016.

La Neuveville has been the seat of the regional parliament for the Bernese Jura, the Conseil du Jura bernois , since 2006 .

La Neuveville developed from a country town to an industrial community in the course of the 19th century. Today there are numerous jobs in the field of precision mechanics , the manufacture of precision devices, in the construction industry and in smaller companies in various branches of industry. The service sector is also very important with 50% of the workforce. Viticulture is important to La Neuveville ; the slope on the north-west bank of Lake Biel, which is optimally exposed to sunlight, is covered with vines.

The commercial college in La Neuveville is well known. Adolf Ogi , among others, obtained a diploma at this school . Until July 2011, Jean-Pierre Graber was the director.

The community has good transport connections. It lies on the highway A5 , which connects with Biel Neuchâtel and the city center relieved of through traffic.

On December 3, 1860, the railway line from Biel to Le Landeron was inaugurated, which forms part of today's Jura foot line .

A post bus course leads from La Neuveville to the communities on the Montagne de Diesse.

The well-preserved, almost square, historical city complex from the 14th century has three parallel streets (laid across the lake and the slope) and a modern cross street. Before the construction of the bypass A5, through traffic was directed through the latter.

The structure of the old town of La Neuveville dates from the 16th to 19th centuries. The town hall, which stands next to the Tour Carrée, was renovated between 1541 and 1569 and now houses the Historical Museum, in which, among other things, the excavations of stilt houses on the shores of Lake Biel and the Burgundy cannons captured in the Battle of Murten in 1476 are exhibited. The prefecture has been located in the Maison de Gléresse since 1954, which was built in 1555, expanded in the 18th and 19th centuries and equipped with a portal in the Renaissance style and a stair tower. The Maison de Berne, built in 1631, belonged to the Abbots of Bellelay and served as a vintage house; In 1804 it became the seat of the city of Bern's winery. The baroque Maison des Dragons is named after its dragon-headed gargoyles . Like the grenette, it dates from the middle of the 18th century.

The city wall has seven towers, most of which were built shortly after the city was founded in 1312. In the southeast is the Tour de Gléresse (also Tour Wyss), towards the lake the Tour de Rive, in the southwest the Tour Baillif, the Tour Hildebrant, the Tour Jaggi in the northwest and in the north the Tour Rouge (Zytgloggeturm), the 1592– 1596 was changed. The massive construction of the Tour Carrée (also Tour des Cloches) northeast of the old town was not built until 1520.

The oldest church is the Blanche Eglise east of the old town. It was first mentioned in 866. The current building dates from 1345, with an extension from the 15th century. Inside it has a wooden ceiling and important Gothic wall paintings from the time it was built.

The Reformed Church of Temple du Lac is also called Temple neuf or Temple du Bas. It was built in 1720 based on the Temple du Bas in Neuchâtel.

To the north of the old town is the suburb (Faubourg) with rows of houses from the 16th to 19th centuries. They mostly belonged to craftsmen and winegrowers and therefore had devices for the freight elevator on the gables or roof hatches.

Schlossberg Castle , built at the request of the Prince-Bishop of Basel at the end of the 13th century, stands on a mountain spur above the town .

The Ligerz farm (French Cour Gléresse ), apparently also known locally as Le Forel , is a former castle from 1555 in the hamlet of Schafis and has been home to the “Hof” vineyard museum on Lake Biel since 1970 .