Grand-Charmont is a French commune with a population of 5,699 (as at 1st January 2017) in the Doubs department in the region of Bourgogne Franche-Comté .

Grand-Charmont is located 333  m above sea level, about three kilometers northeast of the city of Montbéliard (as the crow flies). The village extends in the gently undulating landscape north of the basin of Montbéliard, in a hollow flanked by the Chaux hill to the south and by the forest of the Grands Bois to the north.

The area of ​​the municipality of 4.56 km² covers a section of the undulating landscape north of Montbéliard. The central part of the area is occupied by the approximately one km² large basin of Grand-Charmont, which averages 330 m. It is drained west to the Lizaine . To the east a wide saddle leads over to the valley of the Savoureuse . The Colline de la Chaux , a long hill ( 406  m ) that marks the southern border, separates the hollow from the Allan valley to the south . To the north, the municipal area extends over the slowly rising slope of Fougères into the vast forest area of ​​the Grands Bois . On a hill north of Fougères, the highest point of Grand-Charmont is reached at 425 m.

In addition to the original location, Grand-Charmont includes the following districts:

Neighboring communities of Grand-Charmont are Châtenois-les-Forges in the north, Nommay and Vieux-Charmont in the east, Sochaux in the south and Montbéliard and Bethoncourt in the west.

Grand-Charmont was first mentioned in a document towards the end of the 12th century under the name Calmons . The place name is derived from the Latin words calx (lime) and mons (mountain). For a long time the town was called Charmont-des-Bois . Since the Middle Ages, Grand-Charmont has belonged to the domain of the Counts of Montbéliard. With the annexation of the county of Württemberg-Mömpelgard (Montbéliard) , the village finally came into French hands in 1793. After the Franco-Prussian War , the Fort de la Chaux was built from 1876 to 1878 as part of the fortress system around Montbéliard and Belfort.

For a long time oriented towards agriculture, Grand-Charmont developed into a suburb of Montbéliard in the course of the 20th century. At the beginning of the 1960s, numerous five- to eight-story apartment blocks were built to the south and north of the old town center in a short time, in which mainly workers from the Peugeot factories (Sochaux, Montbéliard) settled with their families. This led to an increase in the population of 6,000 people within 10 years. The economic crisis and the restructuring of industry in the Pays de Montbéliard in the period from 1983 to 1990 resulted in many families who had moved there leaving the new housing estates. Today Grand-Charmont is part of the Communauté d'Agglomération du Pays de Montbéliard . 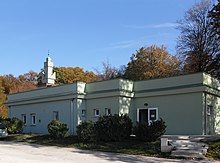 The Protestant Lutheran Church ( Église luthérienne ) of Grand-Charmont was built from 1860 to 1861 according to plans by M. Wetzel and replaced a previous building from 1823 to 1825. There are also two modern Catholic church buildings: Notre-Dame du Bon Accueil ( 1954) in the Le Giboulon district and the Saint-François d'Assise church (1964) in the shape of a mushroom in the Les Fougères district. Fort de la Chaux (1878), which has since been abandoned, is located on the Chaux hill, as well as an area with various leisure and sports facilities.

With 5699 inhabitants (as of January 1, 2017) Grand-Charmont is one of the larger municipalities of the Doubs department. After the population had shown only relatively minor fluctuations in the first half of the 20th century, a marked increase in population began with the establishment of the new housing estates from around 1960. The population quadrupled within around ten years. With almost 8,000 inhabitants, the peak was reached in the mid-1970s. After that, a significant decrease in population was recorded. The downward trend was only stopped in 2008. Today the settlement area of ​​Grand-Charmont has merged with those of Montbéliard, Vieux-Charmont and Sochaux.

Since the middle of the 20th century, Grand-Charmont quickly developed into the residential suburb of Montbéliard. Today, various small businesses are based in the community, but there are no larger industrial or commercial complexes. There are also numerous retail shops for daily needs. However, many workers are commuters who work in the other municipalities of the Montbéliard agglomeration. Grand-Charmont is home to a college, a grammar school and a medical center.

The village is well developed in terms of traffic. It is located on a departmental road that leads from Bethoncourt to Vieux-Charmont. The closest connection to the A36 motorway is around three kilometers away. Other road connections exist with Montbéliard, Sochaux and Nommay. Various bus routes connect Grand-Charmont with the city of Montbéliard and the surrounding communities.

Grand-Charmont has had a community partnership with Dohlain-Limbourg in Belgium since 1972 .

Communes in the arrondissement of Montbéliard