Sabina Classen with Holy Moses at a concert in Bamberg 2019 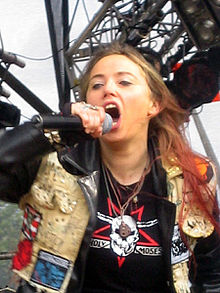 Sabina Hirtz (* 27. December 1963 in Aachen , divorced Classen ) is a German thrash metal - singer and TV presenter . She was one of the few women in Thrash Metal, especially in the 1980s, and is one of the most important women in the metal scene , especially with her activity in the band Holy Moses . She is known for her extremely rough singing style.

Classen grew up with two younger siblings in Aachen. Through her uncle she got to know bands like The Sweet , The Rolling Stones , Jimi Hendrix and Motörhead . Together with her boyfriend and future husband Andy Classen , she played Uriah Heep Cover in a band called Disaster . Shortly afterwards, in 1981, Andy Classen left Disaster and joined Holy Moses . During a rehearsal in December 1981, the singer Iggy was kicked out of the band, Sabina Classen took his place.

In 1986 she participated in the X-Mas Project .

After divorcing her husband Andy Classen, Sabina Classen took a break with Holy Moses in 1992 and founded Temple of the Absurd . After two albums, the band broke up in 2000, at the same time Classen re-formed Holy Moses. She is still active live with Holy Moses and the last album was released in 2015.

At the age of 13 and 14 she was already active as a reporter for RTL Radio . At the end of the 1980s she was the presenter of the metal show Mosh on RTL and from 1997 on the online show Bullet TV .

Sabina Classen trained as a state-approved alternative practitioner in the field of psychotherapy and made off with his own practice independently .