The Dordogne [ dɔʁdɔɲ ] is the French department of 24 with the ordinal number It is located in the southwest of the country, in the region Nouvelle-Aquitaine and is named after the river Dordogne named.

The most important river is the eponymous Dordogne , which crosses the southern part of the department from east to west and flows through its second largest city, Bergerac . Coming from the northeast through the capital Périgueux and further west the Isle runs . As another right tributary of the Dordogne, the Vézère reaches the department in the east, then runs in a south-westerly direction and flows into the main river in Limeuil .

The north of the department is part of the Périgord-Limousin Regional Nature Park .

The department was formed during the French Revolution on March 4, 1790 from most of the then existing province of Périgord . It was divided into nine districts (French: district), the forerunners of the arrondissements . The districts were Bergerac, Belvès, Excideuil, Montignac, Mussidan, Nontron, Périgueux, Ribérac and Sarlat. The department and the districts were divided into 72 cantons and in 1791 had 433,343 inhabitants. The capital was Périgueux , initially planned to alternate with Bergerac and Sarlat, but this was shelved in the same year.

The arrondissements were established on February 17, 1800. They were Bergerac , Nontron , Périgueux , Ribérac and Sarlat .

When Sarlat and La Canéda were merged on March 1, 1965, the arrondissement was also renamed Sarlat-la-Canéda.

The most populous municipalities in the Dordogne department are: 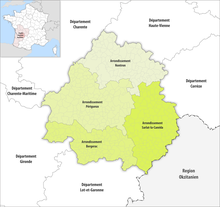 Communes and arrondissements in the Dordogne department

The Dordogne department is divided into 4 arrondissements , 25 cantons and 505 communes :

The Dordogne department is rich in archaeological sites ( Dolmen de Cantegrel , Dolmen Peyre Levade ) and caves as well as abrises with petroglyphs , rock paintings and sculptures from the Stone Age , troglodytic buildings and villages, and other natural caves that are open to visitors. Points of attraction are also some castles, numerous castles (see: List of castles and chateaux in the Dordogne ) and various abbeys. 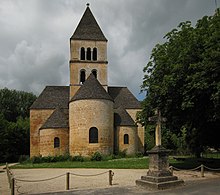 Departments in the region Nouvelle-Aquitaine