War of the Breton Succession

The War of the Breton Succession or "War of the Two Joans" from 1341 to 1364 was a dispute between the houses of Châtillon , which was owned by the County of Blois , and Montfort over the Duchy of Brittany . It fell in the first phase of the Hundred Years War in France.

Until 1341, Brittany was ruled by dukes from the Dreux family, a branch of the Capetian family . The dukes had historical ties to England and were also Earls of Richmond in Yorkshire . Duke Arthur II (1262–1312) married Maria von Limoges (1260–1291) first, then Jolanthe von Dreux (1263–1322), Countess von Montfort and widow of the Scottish King Alexander III. Arthur's marriage with Maria resulted in three sons, including his later successor Johann III. and Guido , Count of Penthièvre . Arthur had other children with Jolanthe, including a son, Johann , Count of Montfort-l'Amaury.

After he had become duke, Johann III tried. in the first years of his government about having his father's second marriage declared invalid and thus degrading his half-siblings to bastards not entitled to inheritance. When this failed, he tried, as he himself remained childless and his brother Guido died in 1331, to ensure that his half-brother Johann did not inherit the duchy. He therefore appointed his niece Johanna von Penthièvre, known as "the Lame" ( la Boiteuse ), Guido's only child, as heir and in 1337 married her to Karl von Blois , the second son of the powerful family of counts and nephew of King Philip VI. In 1340, however, Johann III. his opinion, reconciled himself with his half-brother and declared him his successor. On April 30, 1341 Johann III died.

The competitors did not take any legal steps to secure their claims, but had both in Paris with King Philip VI. auditioned, especially since Brittany had been a French pair since 1297 . It soon became clear that Philip would recognize his nephew Karl von Blois as a legitimate heir - contrary to the current Lex Salica , according to which Johann von Montfort was clearly to be appointed.

Since most of the nobility also supported Karl von Blois in the question of succession, Johann von Montfort had to create facts in order to be able to assert himself at all. He immediately left the audience in Paris, occupied the capital Nantes and confiscated the ducal treasure that was in Limoges , which was also owned by John III. had heard found. When he returned to Nantes in May 1341, he had the nobility and clergy convene, but a large part of them did not appear. In June and July he secured control of the main fortified places, so that by mid-August he was in possession of most of the duchy, including the three largest cities, Nantes, Rennes and Vannes . He then traveled to England, where King Edward III gave him . assured military support and recognized him as the Earl of Richmond.

Up to this point the question of succession had been a purely internal matter for Brittany. In the south-west of France, however, the Hundred Years War raged since 1337, which was interrupted with an armistice in 1341. However, it was clear that with the expiry of the deal in June 1342, hostilities would resume.

When King Philip VI. learned of Johann's English contacts, he was called to Paris by the other pairs - Johann preferred to flee, whereupon Philip VI. on September 7, 1341 by the decree of Conflans, Karl von Blois was recognized as duke and Johann von Montfort had lost all of his French fiefdoms, especially Montforts. 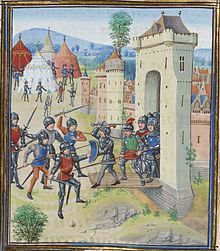 Edward III. was kept by the armistice not to become active in France before June 1342, Philip VI. on the other hand, nothing prevented them from taking action against insurgent vassals . In November 1341, after a two-week siege of Nantes, Johann von Montfort was forced by the inhabitants of the city to submit. He was given safe conduct to enter into negotiations with Karl von Blois, but he was thrown into prison when these did not lead to anything.

It was now up to Johanna von Flandern's wife, Johanna von Flandern, to move the Montfort affair forward. Believing her position in the east to be untenable, she set up her headquarters in Hennebont , a place in western Brittany, while in Paris they were now busy repelling Edward's expected landing in Calais after the end of the armistice. The largest part of the French army was therefore withdrawn and Karl von Blois was left alone with his claims. In this situation, however, he proved to be a capable military man, because he also succeeded in conquering Rennes and Vannes for himself.

At the end of November 1342, Edward III landed. in Brest and marched almost immediately against Vannes. Its siege dragged on until a French army marched up, but before any major fighting was fought, the kings agreed on another armistice on January 19, 1343, in which Vannes was placed in the care of the Pope . 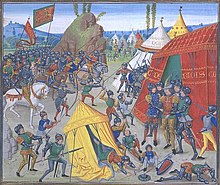 Charles of Blois is captured at the Battle of La Roche-Derrien.
(1347, Bibliothèque nationale de France)

In 1343 Johann von Montfort was imprisoned, but released a short time later. Karl attacked Hennebont, which was successfully defended by Johanna von Flanders. An English army lifted the siege and forced Charles to an armistice, which was broken shortly afterwards.

In 1344, Charles of Blois captured Quimper with the help of a French army , killing 2,000 civilians.

In 1345 Johann von Montfort failed to recapture Quimper, fell ill and died in the autumn of the same year. His underage son Johann V. Johanna von Flanders inherited the claims to Brittany and became the political and military leader of their side.

In 1347 Charles of Blois was captured by the English at the Battle of La Roche-Derrien .

In 1355 Karl von Blois was released for a ransom of half a million écu .

On September 29, 1364 the battle of Auray took place . Bertrand du Guesclin and Karl von Blois were decisively defeated by John V and the English military John Chandos . Karl fell in the battle.

In 1365 Johann V was recognized as Duke of Brittany , Charles's widow Johanna gave up all claims to Brittany in the Peace of Guérande . Surprisingly, the duke submitted not to the English but to the French king.

The "Tournament of Thirty"

The course of the war was not so much characterized by major battles as by numerous equestrian skirmishes, sieges and minor skirmishes. The so-called Tournament of Thirty ("Combat des Trente"), a knight tournament held on March 27, 1351 , in which thirty fighters of the Blois faction, led by Robert de Beaumanoir, the same number of knights of the Montfort faction, achieved fame . led by Robert Bemborough. After a bitter fight and the deaths of Bemborough and eight of his supporters, the French were declared winners of the tournament. Although the Tournament of Thirty had no effect on the actual course of the war, there are legends about its course. Robert de Beaumanoir is said to have - exhausted and bleeding from numerous wounds - asked for a drink during a break in the fight, after which his adversary Bemborough is said to have asked him to drink his own blood.

Even after the Peace of Guérande, the conflicts in Brittany continued and did not come to an end until 1379. The rural population in particular suffered from the almost forty years of looting and war contributions. Cities like Nantes , Rennes or Quimper , on the other hand, succeeded in this phase of a weakened central power to improve their status through privileges.

Commons : War of the Breton Succession  - Collection of images, videos and audio files