Agnès Varda (born May 30, 1928 in Ixelles , Brussels-Capital Region , Belgium , as Arlette Varda ; † March 29, 2019 in Paris ) was a French filmmaker , photographer and installation artist . She is considered one of the key figures in modern film and was one of the leading filmmakers. Some critics call her the Grand-mère de la Nouvelle Vague (grandmother of the Nouvelle Vague ).

Agnès Varda was born in 1928 as the daughter of a Greek father and French in Ixelles in Brussels and grew after the family in 1940 before the war had fled from Belgium, along with their four children on the French Mediterranean coast in Sète in unoccupied France on. There Varda graduated from college and then went to Paris, where she attended the Lycée Victor-Duruy . With the aim of becoming an art restorer, she studied literature, art history and philosophy at the Sorbonne and the École du Louvre . Then she did an apprenticeship as a photographer. In 1949 she met the theater actor and director Jean Vilar , who took over the Paris Théâtre National Populaire (TNP) in 1951 and made Varda the institution's official photographer. In addition, Varda worked as a photo reporter for various magazines and toured China, Africa, the USA and the USSR.

In the mid-1950s, Varda, Chris Marker and Alain Resnais formed a loose association of film enthusiasts in Paris, which was subsequently referred to as the 'Groupe Rive Gauche' in order to distinguish it from the group of film critics of the magazine Cahiers du cinéma , which ultimately became the core of the Nouvelle Vague formed. Varda developed an interest in translating her ideas about photography into moving images. In 1954 she founded a film production company, Tamaris Films, and on a shoestring budget she shot the feature film La Pointe-Courte in and around Sète , the form of which was inspired by a novel by William Faulkner . While working on the film, she was supported by Resnais, who did the editing and took care of sales. The film's only two professional actors, Silvia Montfort and Philippe Noiret , came from TNP.

Varda's relationship with actor and director Antoine Bourseiller resulted in a daughter in 1958 whose parents had separated when she was born. In the same year Varda met the director Jacques Demy , whom she married in 1962 and who adopted her daughter Rosalie . Varda stayed with Demy until his death in October 1990. In October 1972 their son Mathieu Demy was born , who later became an actor, director and screenwriter himself.

In 1967 she was involved in the documentary Fern von Vietnam alongside Claude Lelouch , Jean-Luc Godard and Chris Marker . This was one of the first films to take a critical look at the Vietnam War . 1969 Lions Love was created , in which Andy Warhol and Jim Morrison can be seen, among others .

In 1987 she made an unusual film portrait about Jane Birkin Jane B. par Agnes V. In 1991 she filmed Jacques Demy's biography with the German title Jacquot as a homage to Jacques Demy .

Varda worked as a director until shortly before her death. In 2019, her documentary Varda par Agnès ran out of competition in the competition at the Berlinale , where Varda was also awarded the Berlinale Camera Prize. She had already received the honorary Oscar for her life's work in 2017 . Agnès Varda died of cancer in Paris in March 2019 at the age of 90. She found her final resting place on the Parisian Cimetière Montparnasse (9th Division).

A few months after Varda's death, a photo of her filming her debut feature La Pointe Courte (1955) served as the template for the official festival poster for the 72nd Cannes International Film Festival . 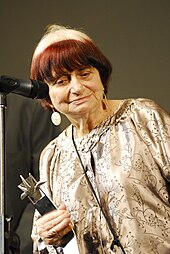 In 1961, the film was released Wednesday between 5 and 7 , which won a French critic award in 1963. In 1965, happiness was created from the man's point of view , a film with a strongly feminist point of view. At the 1965 Berlinale , Varda received the jury's special prize for this.

In addition to experimental feature films, she turned her attention to documentaries such as Black Panthers (made in 1968 on a trip to America), Daguerrotypen (1975), Réponses des femmes (1975) and Ulysse (1981) in the 1970s . The collector was named Best Documentary by the Los Angeles Film Critics Association in 2001.