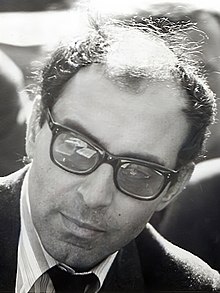 Jean-Luc Godard (born December 3, 1930 in Paris ) is a French - Swiss director and screenwriter . He is one of the most influential film directors of the 1960s and was part of the Nouvelle Vague . With film-technically innovative, mostly very socially critical films such as Out of Breath , The Contempt and Elf O'clock he had a lasting impact on the cinema. In 2010 he received the honorary Oscar for his life's work.

Jean-Luc Godard comes from an upper-class French-Swiss family. His father was a doctor and owner of a Swiss private clinic, his mother came from a respected Swiss banking family. He is a cousin of the former Peruvian President Pedro Pablo Kuczynski . The grandparents collaborated with the Vichy regime during the German occupation . Godard, who originally only had French citizenship, became a citizen of Gland in the canton of Vaud in 1953 . He has lived in the small town of Rolle on the north shore of Lake Geneva since around 1980 .

Godard first attended school in Nyon in the canton of Vaud . After his parents divorced, he moved to Paris in 1948, attended the Lycée Buffon there and began studying ethnology at the Sorbonne a year later . During his student days he came into contact with a Parisian film club and found access to a group that also included François Truffaut , Jacques Rivette and Éric Rohmer . When André Bazin founded the critical magazine Cahiers du cinéma in 1951 , Godard was one of its first authors alongside Rivette and Rohmer.

In 1950 Godard founded his own film magazine with Rohmer and Rivette, which was discontinued after five issues. From 1952 he wrote as a film critic for the film magazine Cahiers du cinéma , occasionally under the pseudonym Hans Lucas. He described this phase of his life as extremely important for his later cinematic work. Like Truffaut, he is one of the directors of the Nouvelle Vague , who have always accompanied their films with extensive writings. In it, he cites the directors Dreyer and Murnau and the writer Dostoyevsky , among others . ("There is only a quantitative, not a qualitative difference between writing and turning.")

After a failed attempt, he made his first own film in 1954, Opération Béton , which reported on the construction of the Grande Dixence dam in Switzerland. Godard himself worked there as a construction worker to supplement his finances. However, the film has been described by the critics as uninspired and superficial compared to the essays. Between 1955 and 1958 he made four other short films, some of which contained anticipations of his first film Breathless . At the same time he was working as a film editor on documentaries - a work in which he made extensive use of the montage aesthetics of classic feature films.

Godard established himself as a director with the feature film Out of Breath (À bout de souffle) , which appeared in 1960 . The film also helped its main actor Jean-Paul Belmondo to break through. François Truffaut wrote the script based on a story of the same name, but made some changes. During the shoot, which lasted four weeks, Godard was often intuitive and took days off. The whole film was shot with a handheld camera. In addition, there was only minimal lighting and the cameraman Raoul Coutard used stylistic devices that were unconventional for the time, such as jump cuts , axis jumps and axis shifts. Godard himself plays a passerby in a minor supporting role. He later referred to the film as "fascist" at times.

His second film caused a sensation not only artistically but above all politically. The little soldier (Le petit soldat) reflects the brutality of the Algerian war , with which the French army fought the independence movement there. The film was banned by the censors and was banned from showing in France for two years on the grounds that the youth could be prevented from serving in Algeria. It was only after Godard erased all names and newspaper reports on the radio news for that film that the film was cleared for France.

Godard was very productive until the end of the 1960s, with films like Weekend , La chinoise or Two or Three Things I Know about her being difficult to classify chronologically because they were partly shot in parallel. In these works he moved further and further away from realistic narrative cinema in the style of Truffaut towards an experimental use of music, writing tablets and, for example, contributions to the Vietnam War , which was mentioned in almost all films of the period. Weekend, for example, contains one of the longest tracking shots in film history, which is interrupted four times by writing panels. The main actor in the film ruthlessly fights his way through a traffic jam on a French country road, at the end of which Godard stages a bloodbath. The film is Godard's reflection of his time; it shows hippies who turn out to be cannibals , burning fictional characters (borrowed from Lewis Carroll ) and two African-Americans who, quoting Malcolm X, prophesy the downfall of consumer society. At the end the final title Fin du cinéma appears, which leaves the viewer with the image of a world without perspective.

Even later, especially after 1968, Godard provoked again and again in his films with radical social criticism . From a cultural and historical point of view, the year is of decisive importance, because the so-called “events” (“événements”) of Paris May came about that lured Godard out of his reserve. After he slapped the producer of his film One plus One (also: Sympathy for the Devil) , his works were no longer made available to the cinema audience through the film distribution, which was done by mutual agreement. Therefore, the works created afterwards are often referred to as the invisible films . Together with the socialist theorist and Althusser student Jean-Pierre Gorin , he founded the Groupe Dziga Vertov (named after the Soviet filmmaker and film theorist Dsiga Wertow ), which rejected commercial cinema and placed its films in the service of the revolution , in particular the "anti-Zionist" of the Palestinians. From the perspective of this group, the imperialist cinema of that time could not be fought with its own weapons. And since no revolutionary films had been made since Griffith , grammar and presentation had to be reinvented.

In the years 1972 and 1973 Godard took over the company Sonimage which made him independent of major production companies and the autonomy of the means of production allowed. Six years later, Sonimage signed a contract with the independent state of Mozambique , which turned to Godard to create an infrastructure for moving images for the country. The new start with this company had little to do with the provocative and unbridled works before. Godard now mainly worked with video cameras and approached a documentary style.

Among other things, he dealt with his own works in a kind of self-reflection, but also with (film) history: The film Nouvelle Vague from 1990 thematized the cinematic trend of the same name. His important late work Histoire (s) du cinéma (1988–1998) consists almost exclusively of fragments from film history and historical documentary recordings. He also made German reunification the subject of his film Deutschland Neu (n) Null (“Allemagne 90 neuf zéro”) .

Godard is still active on film today. However, his avant-garde works find it difficult to be included in a program in the cinema landscape, which is increasingly dominated by commercial multiplex cinemas . However, new works by him can be seen regularly at film festivals.

Godard and his style

Poster advertising a woman is a woman (1962)

Godard is one of the leading exponents of the Nouvelle Vague and the Auteur theory . His films are considered to be trend-setting. Among other things, they are characterized by their free and experimental form. From the beginning he opposed the style of classic Hollywood cinema, for example by not filming dialogues in the conventional way (shot and reverse shot), but experimenting with camera movements and positions. His films are often collage-like images of reality. Godard often uses the jump cut and experimented with it - as the first director ever - out of breath . The “violations” of what was customary up until then are hardly noticeable today, as they are now used in even the simplest television interviews. In part, it breaks through film reality by revealing the recording mechanisms of the medium on the one hand, but also incorporating documentary aspects on the other. For example, he allows his characters to have their say around an interview (two or three things I know about her) or, by lining up images that do not belong together, denies a continuity that suggests a realistic environment in commercial films. The plot is, especially in his earlier films, often interrupted by, for example, sudden musical interludes (Pierrot le Fou) or abrupt, unspecified shootings ( Masculin - Feminin or: The Children of Marx and Coca-Cola ) , according to his weakness for American genre films, although he rarely took more than a few basic situations from them. His declared aim was to dissolve the perception of the film, which is seen as natural through habituation, in order to focus on an analysis of his own subjective point of view. He often uses writing in his films to examine their pictorial qualities (Une femme est une femme , " A woman is a woman ").

In many of his films he also dealt with the problem of the relationship between language and image, suggesting on the one hand that language can never accurately reproduce a pictorial action, on the other hand he does not trust the poetry of the images (“We try to show fewer and fewer pictures and make more sounds ”). He tries to gain control over the images with the help of language. After 1967 Godard no longer spoke of film as such, but only of images and sounds. He is also interested in the question of why those words or images are used that are used and not any other. He is consequently looking for the “right” words and images and offers the viewer various options in this regard in some of his films. He constantly questions perception and points to its subjective and uncertain character. It shows how limited people's secure knowledge of objects or people of any form is. In his film Two or Three Things I Know About Her, he refers to Ludwig Wittgenstein . There he lets his actress say: "The limits of language are the limits of the world - my language, my world."

Godard's cinema cannot be reduced to a single style, because its qualitatively different and sometimes contradicting attitudes make his oeuvre as a whole difficult to grasp. Like a scientist, Godard was always on the lookout for the truth, which, in his opinion, can only be of a temporary nature using the classic means of film narration. He included the experimental arrangement of his films in the evaluation of the result ("I prefer to look for something that I don't know instead of doing better something that I know.") Similar to Friedrich Schlegel ("Nur the unfinished can be grasped. ”) New goals were more important to Godard than the path covered. Again and again he asked himself how the knowledge about the technology of the film could be obtained and in what way this technology could represent reality.

Filmography as a director (selection)