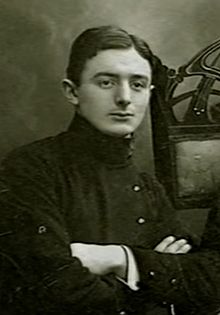 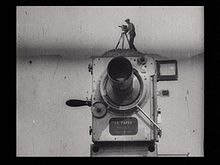 Scene from Wertow's The Man with the Camera (1929)

Dziga Vertov ( Russian Дзига Вертов , actually Dawid Abelewitsch Kaufman / Давид Абелевич Кауфман ., Scientific transliteration Dziga Vertov (meaning: ! Roundabout, turn thee ); * 21 December 1895 . Jul / 2. January  1896 greg. In Białystok , † February 12, 1954 in Moscow ) was a Soviet filmmaker . Because of his experimental work as well as his theoretical texts, he is considered one of the most important early directors of documentaries .

Vertov was a brother of the late Hollywood - cameraman and Oscar -Preisträgers Boris Kaufman and cinematographer Mikhail Kaufman , with whom he collaborated, as in his most famous film Man with a Movie Camera .

Wertow came from a Jewish intellectual household and studied at the art school in Białystok, later in Saint Petersburg and Moscow.

Dsiga Wertow was born in 1896 into the family of a librarian. After middle school, he attended a music school and two other higher education schools. He was the oldest of three children; they grew up in Bialystok. He changed his name David Abeljewitsch Kaufman to Dziga Wertow when he came to film after the October Revolution.

With the beginning of the October Revolution in 1917, he produced agitational newsreels ( Kinonedelja ( film week ) and Kino-Pravda ( film truth )), later also longer, partly propagandistic documentaries . His wife Jelisaveta Swilowa assisted him in his work as a film editor and his brother Michail Kaufman as a cameraman.

Like Sergei Eisenstein and other Soviet silent film directors of his time, he tried to influence the audience of his films through methods of film editing . In doing so, he often proceeded far more experimentally than his contemporaries, which put an end to his artistic career when, in the 1930s, socialist realism was also prescribed as a model in film art - and film documentarists in particular had to pay tribute to the personality cult around Stalin. In 1934, for example, in Drei Lieder über Lenin - a cinematic hymn about the founder of the Soviet Union on the 10th anniversary of his death - Wertow had to stage him adequately on Stalin's orders. The relevant film Lullaby is a revealing example of the misuse of its documentary means and its montage art.

Wertov's best-known film and at the same time an exemplary crystallization of his entire oeuvre is The Man with the Camera (Человек с Кино-Аппаратом / Tschelowek s kinoapparatom ), which on the one hand glorifies urban life in large Soviet cities and the mechanization of life, but on the other hand glorifies the process of creation Camera lens themed to the cutting room. A multitude of content and stylistic similarities make this film a predecessor to Godfrey Reggio's Koyaanisqatsi .

Wertow published various writings and manifestos about the aesthetic considerations behind his films. He rejected the fictions of the feature film staged with actors as bourgeois . In contrast, he saw revolutionary potential in the cinema glaz ( cinema eye , meaning the camera lens), which could capture every detail of the world comprehensively and objectively.

The meaning and the effect of the film should be created not through acting, staging or the structures of other arts (theater, the novel), but through the sophisticated montage of objective excerpts of reality. In this way, the recorded reality could also be effectively re-systematized in such a way that it serves agitational purposes. Wertow's concept of the non- fictional film was taken up again around 1970 by the GDR director Joachim Hellwig as part of his artistic work group defa futurum .

From the late 1960s, Dsiga Wertow's work was rediscovered by aesthetically and politically radical artists. Pioneering here was Jean-Luc Godard , who gave up his individual work as a director at the end of the 1960s and only made films in the programmatically named collective of the group Dsiga Wertow (French Groupe Dziga-Vertov ) until the 1970s . At the documenta 8 in Kassel in 1987 , recordings of him were shown as an official contribution to the exhibition as part of the “Archeology of Acoustic Art 1: Radiofonia Futurista”.