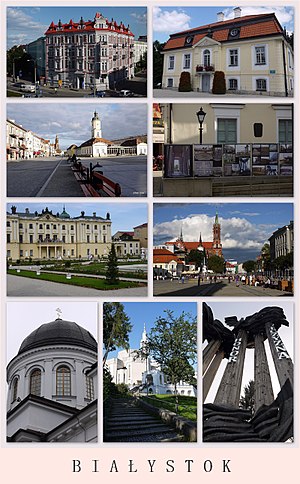 Throughout its history, Białystok has been a multilingual city. From the founding of the city to the Second World War, Jews often made up the majority of the population. From the middle of the 19th to the beginning of the 20th century there was also a numerically significant German minority . Today the Belarusians are the largest minority in the city.

Białystok is located in a productive rural region. In the 19th and 20th centuries, the city became a center of mechanical engineering and the electrical, metal and beer industries. It is located on the railway line from Warsaw towards Kaunas / Vilnius ( Rail Baltica ). There are several universities in Białystok . The city is the seat of a Catholic archdiocese .

Białystok is located about 180 km northeast of the state capital Warsaw near the Belarusian border on the small river Biała , which flows into the Supraśl in the northwest of the city , which in turn flows into the Narew a few kilometers further west .

Białystok was first mentioned in a document in the 16th century. From 1665 it belonged to the Branicki family , who expanded it into a residential town. At the instigation of Stefan Branicki, Białystok received town charter in 1692, which August III. Renewed in 1749.

Białystok and its surrounding area came under Prussian rule in 1796 and fell to Russia as Белосток / Belostok after the Peace of Tilsit (1807) . This fact and the establishment of a customs border between Congress Poland and Russia in 1831 made the city flourish. The customs border ensured that companies from Poland relocated their headquarters to the now Russian Białystok (Belostok) in order to be able to continue producing for the Russian army. With the opening of the Warsaw-Petersburg Railway , which ran through Białystok, the city became an industrial center. With industrialization in the middle of the 19th century, a significant German minority formed, which comprised around 12,000 people in 1885, but decreased again in the following decades: in 1913 there were only 5,000 Germans in Białystok, in 1935 there were still 2,500. In 1900, 63% of the population were Jews, so the city developed as a major Jewish center. During the First World War , a German air raid on Białystok took place on April 20, 1915, which resulted in 13 dead and 34 injured. The Russian troops caused severe damage when they withdrew from the approaching Germans on August 13, 1915. The city remained under German control from then until February 19, 1919.

After the First World War, Białystok became part of the Second Polish Republic and from 1919 to 1939 the capital of the voivodeship of the same name .

Shortly after the beginning of the Second World War , the city was captured by German troops as part of the attack on Poland in mid-September 1939, but after the secret agreement in the German-Soviet non-aggression pact, it was handed over to the troops of the Soviet Union on September 22, 1939 (official name Беласток / ladenok ) . In the course of the German attack on the Soviet Union that began on June 22, 1941 , Białystok was reoccupied by the Wehrmacht ; June 27, 1941, the German burnt Police Battalion 309 , the Great Synagogue of Białystok down, in which they had driven hundreds of Jews. The new rulers established the Bialystok District and the Białystok Ghetto here . Most of the then approximately 43-60 thousand Jewish residents were taken to the Treblinka and Auschwitz extermination camps and murdered there. Białystok was the official seat of the head of the civil administration and the commander of the security police and the SD , who commanded the subordinate commanders (KdS) and task forces of the security police and the SD .

At the end of July 1944, the city was captured by the Red Army . It was initially planned to incorporate the city together with the western part of the former voivodeship into the Soviet Union. It has belonged to Poland since 1945 and, having been the seat of the voivodeship of the same name until 1998 , has been the capital of the Podlaskie Voivodeship ( województwo podlaskie ) since the reform of the Polish public administration in 1999 . 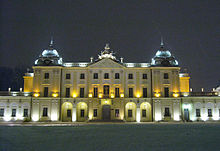 Worth seeing are the baroque town hall ( barokowy ratusz miejski ), the Branicki palace ( Pałac Branickich ), today Medical University, the cathedral ensemble (old church from the 16th century with splendid furnishings from the 18th century and the one built in neo-Gothic style Cathedral from the years 1904 to 1915 - there are several works of art such as the main altar and the pulpit). Białystok is also home to several Orthodox churches, including St. Nicholas Cathedral and Hagia Sophia.

Two hundred meters east of the cathedral is the Army Museum (in Polish, Muzeum Wojska w Białymstoku ). It is a museum of Polish military history and the biggest war museum in Podlasie. In 2018 it had more than 40,000 visitors.

The Podlaskie Opera and Philharmonic was opened in 2012.

About 80 km from the city is the Białowieża National Park , where many rare animals live, including bison . 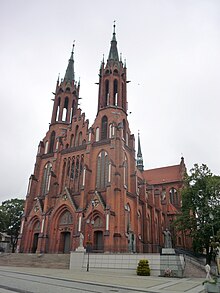 Historically, Białystok has long been a melting pot of different cultures. At the turn of the 19th and 20th centuries, Białystok had a mixed population. In 1897 the city had around 66,000 inhabitants. 62% of the population stated Yiddish as their mother tongue, 17.2% Polish , 10.3% Russian , 5.6% German and 3.7% Belarusian . There were also a few hundred Lipka Tatars in the city.

The German minority had a German elementary school until 1928 (the headmaster was Wilhelm Migulski) and a Protestant parish St. Johannis, which was called Ulica Pierackiego in 1912 in what was then Alexandrowska (Alexanderstraße), after the First World War and Ulica Warszawska from 1932 at the latest ) stone church built in neo-romantic style, which is now known as Kościół św. Wojciecha serves the Polish Catholic community.

During World War II, most of Białystok's Jews were murdered in the Holocaust , and the demographic composition of the city changed radically. At the end of 1945 there were only 1,085 Jews living in the city, the number of which decreased further in the next few years due to emigration. Most of the city's German and Russian minorities had also left Białystok after the end of the war.

Of the approximately 295,000 inhabitants today, around 97% are Poles, there is also a small Belarusian minority of around 2.5%. It is represented by several cultural centers in the city and operates, among other things, the radio station Radyjo Razyja . 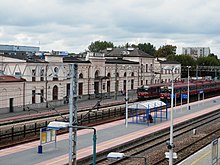 Białystok is located on the largely completed S8 expressway , which connects the town with the state capital Warsaw . There are also plans to upgrade the national road DK19 to the expressway S19 , which will lead via Lublin to Rzeszów .

The city is the starting point of the Głomno – Białystok railway , and it is also located on the Zielonka – Kuźnica Białostocka railway along the former Petersburg-Warsaw railway that runs from Zielonka near Warsaw to the Belarusian border. In June 2016, a regional train connection to Kaunas, Lithuania, was resumed at the weekend . In addition, regional routes to Czeremcha and to Zubki in Gmina Gródek branch off in Białystok . In addition, the planned rail link Rail Baltica is to run through Białystok.

In January 2017, a referendum was held on the construction of a regional airport for the Podlaskie Voivodeship in Białystok, with 96% of the voters in favor. However, due to the low turnout of around 13%, the result is not binding. 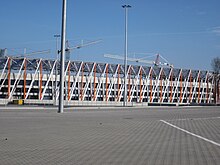 The Jagiellonia Białystok football club, which competes in the Ekstraklasa , the highest Polish league, is based in Białystok . The greatest success of the club, which plays its home games in the Miejski stadium, which holds around 22,000 spectators , is winning the 2010 Polish Football Cup .

Mayor of the City

At the head of the city administration is a city ​​president who is directly elected by the population. Since 2006 this has been Tadeusz Truskolaski from Platforma Obywatelska (PO).

In the 2018 election, Truskolaski ran for the electoral alliance Koalicja Obywatelska from PO and Nowoczesna . The vote brought the following result:

Truskolaski was thus re-elected in the first ballot.

The city council consists of 28 members and is directly elected. The 2018 city council election led to the following result:

The 21 twin cities of Białystok are:

→ Main article : List of personalities of the city of Białystok