This article deals with the socio-philosophical concept of the minority. For more see: democratic minority . 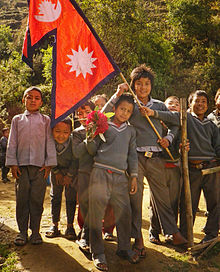 Group of students from the Tamang minority in Nepal

A minority (also a minority or minority ) is a numerically smaller part of a population that differs from the majority through personal or cultural characteristics . As a demographic group, a minority mostly lives in a certain territorial unit ( state , region ...), but it can also be spread over the residential area of ​​the majority or live in several neighboring states.

The distinguishing features of minorities are mostly language , ethnicity or religion, but moral concepts, sexual identity or social function can also determine the status of minorities. A minority exists when a group is dominated and minorized by a numerically larger group of a territory without assimilating.

In the traditional sense, minorities mean ethnic , religious or national minorities , i.e. population groups on the territory of a state as opposed to a certain majority of the population.

The UN and other international organizations have adopted minority rights. They are respected differently (see also protection of minorities , human rights ). In 1988 the IMADR (International Movement Against All Forms of Discrimination and Racism) was founded in Tokyo, which draws attention to the problems and discrimination of minorities and campaigns for the rights of disadvantaged ethnic groups.

Social psychology distinguishes two types of minorities: a numerical-statistical and a social one. The latter describes a minority that differs from the rest of society through cultural and / or psychological characteristics and is thus viewed and treated as inferior by the socially dominant group.

Under the influence of American sociology , the term “minority” has changed in meaning over the past fifty years. The term is applied to virtually all groups numerically less than half of a given population, whose appearance and demeanor deviate from prevailing customs and behavior, and who have less influence than the rest of the population.

There is no binding definition of “minority” from a political point of view under international law.

The following (very broad or general) elements are often considered to be constitutive for a "minority" within the framework of the UN Special Commission for Minorities:

In 1994 the UN Human Rights Committee rejected the view that the citizenship of the country of residence is also a constitutive element .

There are innumerable attempts to categorize and typologize minorities. A rough distinction, which is also used in the context of international law, is the following breakdown:

Another typology differentiates between minority characteristics that are collective-familial (e.g. ethnic minorities) or individual (e.g. sexual orientation, disability). In the case of the individual variant, a further distinction must be made whether it is given or a result of a conscious decision (e.g. by converting to a religious minority).

Historically and currently, the social role of minorities is often tense. Minorities can historically appear as part of a discriminated lower class , such as the Indian “ untouchables ”, or as part of the upper class (according to the slave- keeping plant elite in the sugar-producing islands of the Caribbean ). They can function as an envied part of an economic, intellectual and cultural elite or as a feared sub-proletariat with an above-average crime rate ; as such, they can play a role as a scapegoat in conspiracy theories and sham declarations of social catastrophes. In the process, they can become the object of social projections and prejudices , which in the worst case can end in pogroms , mass displacement and mass murder (examples are provided by the legend of the well-poisoning Jews in the plague catastrophe of the High Middle Ages and the anti-Semitic variant of the stab in the back legend in Germany after the First World War). They can be used deliberately by colonial powers against colonized peoples, for example the Christian inhabitants of the southern Moluccas in the Dutch East Indies , members of lower castes in the military system of British India, etc .; But they can also be conspicuous as "eternal rebels " through recurring alliances with the respective opponents of the state that oppresses them (such as the Irish rebels who made pacts with the France of Napoleon Bonaparte and the German Empire of the First World War).