An absolute majority is a redirect to this article. For other meanings, see Absolute Majority (disambiguation) .

Majority (also majority or plural ) denotes the overwhelming number of a total number of people , opinions or things . Opposition is the minority .

The majority is the largest or the predominant part (or participation ) in a thing or in a decision-making process. It is of fundamental importance in democratic decisions in the form of elections and votes, as well as in company law (including company law , association law ), and there is also information on property law (including home ownership , inheritance law ) about the distribution of property (such as fractional ownership ). The word is mainly used to set up rules for elections and voting , in particular describing what kind of majority is necessary for a decision to be valid.

The presence of a majority in a vote or election is deemed to be sufficient approval for a decision to be reached. Any definition is usually based on oral agreements or is regulated in statutes , ordinances, laws or constitutions . This article describes the underlying classification that is also used in other areas.

This classification can take place in several levels, whereby the different types can be combined with one another. One differentiates

The view of some of the following terms may differ due to historical, cultural and regional influences.

The word majority appeared for the first time in the papal election in 1179, when there was no unanimous opinion. Pope Alexander III issued a new law on the election of the Pope in March 1179 during the Third Lateran Council . Before that, the word appeared around 1000 in Old High German as “mērheit” in the sense of “more being, priority”. The lexicographer Matthias Kramer brought in 1719 the concept of majority ( Dutch Meerderheit ) in his dictionary in connection with persons majorities. Around 1800 the word was used in today's sense, for example by Friedrich Schiller . Historically, the concept of majority had its starting point with people until it later expanded to include countable objects.

In law , both the above Majorities are expressly referred to (e.g. Annex 17 (to Section 32 (4) No. 3) of the European Electoral Code ) and largely omitted due to the lack of clarity in the terminology. Instead, formulations like these are used: 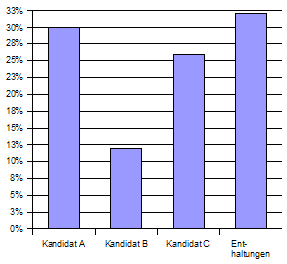 A relative majority : A has the most votes

In the case of a vote, the proposal that has the most votes wins with a relative majority. The appearance of this principle in the constituency candidates in the federal election is exemplary . The candidate with the most votes moves directly to the German Bundestag . If there is a tie between several proposals, the relative majority is formally not achieved by any of these proposals. In federal electoral law, the lot then decides.

Mathematically speaking, it is the subset, whereby this should always denote the approval of a proposal or the totality of the negative votes, the basic set (all valid votes without consideration of abstentions) that contains the most elements.

The relative majority is the lowest requirement for the acceptance of a proposal. Abstentions have no effect, voting with “No” is not permitted - for example when filling board positions in associations or parties , when often only one person is available for election but in the federal election. In the case of relative majority elections, a proposal is often chosen that is not supported by the majority of the voters or those entitled to vote. This is how run-off voting procedures are often justified.

In the case of a relative majority, all votes not cast for the elected candidate are "lost". A well-known example are the elections for parent representatives in schools, where the person who has won the most votes, even if it is not more than half of the votes cast, has won the election (e.g. Section 64, Paragraph 2 of the NRW School Act: Whoever received the most votes is elected. ”). Instant runoff voting , for example, is intended to take this problem into account. 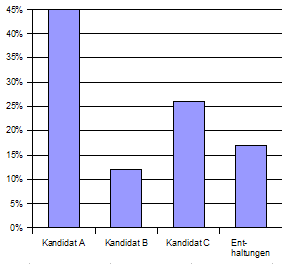 A simple majority : A has more votes than B and C combined

In the case of a vote, the one proposal with a simple majority that has more votes than all the other proposals together won.

Mathematically speaking, it is the subset, whereby this should always denote the approval of a proposal or the totality of the negative votes, the basic set (all (valid) votes without consideration of abstentions) that comprises more than half of the elements of the Basic amount contains.

Abstentions are therefore not taken into account when asked for a simple majority. The problem that proposals win that are not supported by a majority of those who vote or those entitled to vote also remains.

The term simple majority is sometimes also used for relative majorities, which can lead to errors. In fact, both are only identical in the case of two voting alternatives.

Example: Two-thirds majority (quorum = 2/3) of those entitled to vote

Note: Here, too, there are only 588 votes cast ( see above ) . In both examples, the lowest number of people who approve of the proposal is given.

In principle, it is also possible to speak of a qualified majority when using participation quorums, which in terms of their basic amount relate to voting rights and not to approval but to the casting of votes.

The absolute majority is a special qualified majority (see above) with a quorum> 50%.

On the one hand, the different types can be used sequentially, i.e. in sequence. Then, as in the German Federal Chancellor and Federal President elections, an absolute majority is required in the first two ballots and only a relative majority in the third. Further ballots may only be necessary in the event of a tie or a predominance of no votes.

On the other hand, it is also possible to demand different majorities based on different basic amounts at the same time. If two majority decisions are applied in parallel, one speaks of a double majority . This applies, for example, to resolutions with a double majority or qualified majority in the EU. In addition to the approval of a certain proportion of the member states (55% or 72%), it is required that those who agree represent a certain proportion of the EU population (65%).

In certain referenda in Switzerland in addition to the relative decides people more the objects More if a document is accepted (the cantons).

In legal jargon , when a group is affected by something or does something, one speaks of a majority of persons whose members are grouped together as societies . In German criminal law , for example, it is generally not possible to insult a majority of persons. Majorities play an important role , especially in equity investments or in general meetings of companies . The majority opinion is called the ruling opinion .