Jelgava (German: Mitau ) is a city in Latvia in the Zemgale region 44 km southwest of Riga . Until 1919 Mitau was the capital of Courland and, in contrast to the Hanseatic Riga, was aristocratic. Today Jelgava is one of the nine "republic cities" of the country (see the administrative structure of Latvia ). In 2018 Jelgava had 60,941 inhabitants.

Jelgava is located on a fertile plain on the right bank of the Lielupe (German: Kurländische Aa ), the floods of which endanger the low-lying town. The Jakobskanal, named after Jakob Kettler , flows around Jelgava , is a railway junction and an important market for grain and wood.

It is believed that the Latvian name Jelgava from the Livonian word jelgab comes, which means "low-lying place." The origin of the German name Mitau is unclear; some suspect an origin from ( Latvian ) mīt or mainīt , "to change". Other explanations are “in the middle of the floodplain” or “the middle of the Aa”.

Until the Second World War, the mansions of the Baltic German nobility residing in the capital of Courland lined up along Jelgava's regular, wide streets . After heavy losses in the war, buildings from the Soviet era dominate the cityscape today.

The old castle of the Dukes of Courland , built in 1266 on an island in the river, was torn down by Duke Ernst Johann von Biron , who instead had a spacious castle built on the bridge over the Courland Aa from 1738 to 1772 according to plans by Bartolomeo Francesco Rastrelli . The castle is the burial place of all the dukes of Courland and is surrounded by a park. The city's landmarks also include the baroque church of St. Anne, the tower of the destroyed Trinity Church, the Orthodox St. Anne's Cathedral , and two handsome neoclassical buildings, the Villa Medem and the Academia Petrina.

The Cathedral of the Innocent Virgin Mary ( Bezvainīgās jaunavas Marijas katedrāle ) is the Roman Catholic episcopal church of the Jelgava diocese . The church was built between 1904 and 1906 in neo-Gothic style under Karl Eduard Strandmann , but was not consecrated until 1925. During the Second World War the church was badly damaged; the restorations lasted until 1992. With the establishment of the Jelgava diocese in 1996, the church was elevated to the rank of cathedral .

The Liven began to settle in the area between the rivers Lielupe and Driksa in the 10th century. Led by their landmaster Konrad von Mandern , the crusaders of the Livonian Order built Mitau Castle on an existing island fortification ( Pilssala ) in 1265/66 . With Mitau as the southern fortress, the German knights subjugated the Livs and Zemgallians of the area until 1290. The city gained importance as a defense against the Lithuanians , who succeeded in sacking Mitau in 1345.

After the final dissolution of the Livonian Order during the Livonian War , Mitau became part of the Duchy of Courland in 1561, which was a vassal state of the Polish-Lithuanian Union .

Jelgava Castle, view over the Lielupe

In 1573 Mitau received city rights and in 1578 became the capital of the united Duchy of Courland and Zemgale . When this was divided in 1596, Duke Friedrich Kettler von Semgallen made Mitau his residence. In 1617 the city again became the capital of a united duchy. During the repeated wars between Poland-Lithuania and Sweden , Mitau was besieged several times. Nevertheless, the city grew into a center for trade and commerce. However, as Kurland's neighbors grew stronger, the duchy and city came more and more into Russia's sphere of influence .

The penultimate Duke of Courland, Ernst Johann von Biron , expanded Mitau culturally. He had the ducal palace built and opened the city's first public library. In 1775 he founded the Academia Petrina , which became the spiritual center of the country. The duke also sponsored theatrical performances at his court.

With the outbreak of the French Revolution in 1789, the citizens of Mitau demanded more rights. In 1795 their city was annexed together with Courland in the course of the Polish partitions by the Russian Empire and was now called Mitawa ( Russian Митава ). The Academia Petrina was converted into a grammar school illustrious in 1806 , since the Imperial University of Dorpat , which was re-established in 1802, was to be the only state university for the three Baltic Governments .

The Count of Provence and later King of France, Louis XVIII. , the Mitau Palace served as the seat of power from 1798 to 1801 and from 1804 to 1807. In 1799 Marie Therese Charlotte , known as “Madame Royale” (the daughter of Louis XVI and Marie Antoinette ), married her cousin Louis-Antoine de Bourbon, the Duke of Angoulême . During Napoleon's Russian campaign in 1812 , Mitau was the seat of the commander of the Prussian troops of General Ludwig Yorck von Wartenburg, who were allied with Napoleon, from July to December .

Mitau experienced a further expansion after the connection to the railway network in 1868. Latvian rural residents were attracted by the infrastructural development and settled in the city as traders, craftsmen, teachers and civil servants. In 1914 Mitau, called Jelgava by the Latvians, had over 45,000 inhabitants.

After the outbreak of World War I, the city suffered noticeably. German troops occupied Jelgava on August 1st, 1915. In the winter of 1916/1917 the battles on the Aa between the German and Russian armies took place north of Jelgava . During the Latvian War of Independence from 1918 to 1920, Jelgava was fought several times between the Red Latvian Riflemen , the Baltic State Armed Forces , German Freikorps associations and Latvian freedom fighters. After the victory of the latter, Jelgava became an important city in independent Latvia.

The synagogue destroyed by Germans in 1941

A large part of the remaining German population followed the invitation to “ return home ” to the German Reich in 1939 . According to the agreements in the secret additional protocol of the German-Soviet non-aggression pact , the Soviet Union annexed Jelgava in 1940 along with the rest of Latvia. Between 1941 and 1944, German troops of Army Group North occupied Jelgava; a German task force under the command of Franz Walter Stahlecker murdered most of the Jewish population in mid-1941 with the support of local Latvian auxiliary police . 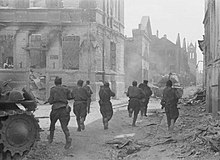 Soviet soldiers during an attack in Jelgava, the tower of the Catholic Church can be seen in the background (August 1944)

From July 28 to October 10, 1944, the war front ran right through Jelgava when the Red Army was again advancing west. Almost 90 percent of the city's buildings including the historic center were destroyed during the fighting. The photo collection of the Kurland Provincial Museum in Mitau (KPM), digitized by the Herder Institute for Historical Research on East Central Europe, gives an impression of the "old" Jelgava before its destruction in 1944 . After the final conquest by the Red Army, the prisoner of war camp 266 , Elgava (Mitau) was set up for German prisoners of war . 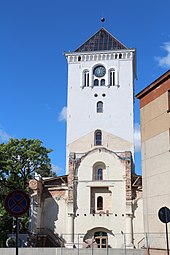 Tower of the Trinity Church of the German community, destroyed in 1944, renovated from 2010–2014 and used as a city museum

The reconstruction took place during the time of the Latvian Soviet Socialist Republic . Today, in independent Latvia, Jelgava strives to develop tourism and research. Since 1939 the city has hosted the Latvian Agricultural University .

EuroMaint operates a component workshop in Jelgava . Jelgava is also known for the locally brewed beer "Mitava". In the 19th century, Mitau was home to the publishing house and printing company JF Steffenhagen und Sohn , which published numerous writings, mainly medical ones, mostly in German.

Other names for the city are:

See also the list of German names for Latvian places .