Marie Thérèse of France as a child (painting by Adolf Ulrik Wertmüller , 1786)

Marie Thérèse Charlotte of France , known as Madame Royale (born December 19, 1778 in Versailles , † October 19, 1851 in Schloss Frohsdorf near Lanzenkirchen ), was the eldest child of the French King Louis XVI. and the Queen Marie Antoinette of Austria . She is considered the sole survivor of the royal family during the French Revolution.

"Madame Royale" grew up at the French royal court of Versailles and was imprisoned in the Temple in Paris with her family after a failed attempt to escape from the Tuileries during the French Revolution . After her release in 1795, Marie Thérèse became Duchess of Angoulême by marriage from 1799. From 1824 to 1830/1836 she carried the title Dauphine and from 1836 to 1844 Titular Queen of France. 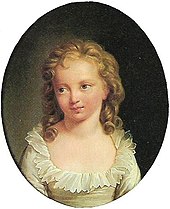 Marie Thérèse as a child 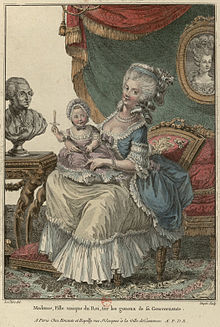 Marie Thérèse in 1779 with her tutor Princess of Guémené 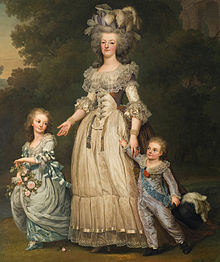 The marriage of Marie Antoinette and Louis XVI in 1770 . remained childless for years. Only after a visit from Marie Antoinette's brother, the Emperor Joseph II , and his clarification with the king, the marriage of the young royal couple could be carried out satisfactorily. On May 5, 1778, the court officially announced the queen's pregnancy. Ludwig gave his wife plenty of presents and had a costume ball held for her before the birth.

On December 18, 1778, around midnight, the queen felt the first pain and the king was woken up. Ludwig reported in his diary that Marie Antoinette now went from the parade bed to her delivery bed. The delivery of the Queen of France took place publicly at that time. Madame Lamballe summoned the royal retinue from Versailles and sent pages: to Saint-Cloud to the Duchess of Bourbon, to the Princess of Conti, to the Duke of Orléans and to Paris to the Duke of Bourbon, the Prince of Conti and the Duke of Chartres. In the midst of the crowd of courtiers, the queen passed out. As a result of this experience, the king abolished the old courtly rule of public birth completely in order to spare the mother in future births.

The child was finally born on December 19, 1778 around eleven o'clock. Marie Antoinette had introduced clapping on almost every occasion, so this happened to the infant as well. The Queen believed that she had given birth to a male heir to the throne. After learning the child's gender, she burst into tears. The girl was baptized Marie Thérèse and given the title Madame Royale or Madame, daughter of the king , so that the Countess Provence could keep her title Madame . The birth of the little girl not only made the French royal couple easier and delighted after the long years of childlessness, but also sparked enthusiastic jubilation all over France and initially increased the popularity of the young royal couple immensely.

Traditionally, the royal children were handed over to the educator of the children of France , including Princess Marie Thérèse. For four years she came into the care of Victoire Armande Josèphe de Rohan, Princess of Guémené (1743-1807). Like any other French princess, Marie Thérèse grew up in great luxury. Her mother took the liberty of having her children around often, to play with them and learn what was considered impossible a generation ago.

At the end of the 18th century France had around 25 million inhabitants, 98% of whom were peasants and burghers who suffered from the financial and economic dominance of the nobility and the high clergy. The discontent of the French people grew steadily and finally culminated with the outbreak of the French Revolution .

After the storming of the Bastille on July 14, 1789, the "ideal world" in the Versailles Palace could be maintained for some time. On the night of October 5th to 6th, 1789, Parisian market women, the so-called Poissards ("fish women"), and also some men disguised as women, went to Versailles to demand bread from the king. After the people stormed the palace that night, the royal family was transferred to the Tuileries Palace in Paris. In June 1791 the royal family failed in their attempt to escape from Paris ( escape to Varennes ).

After the Tuileries storm on August 10, 1792, the king was removed from office and the royal family billeted in the temple . While the king instructed the young Dauphin in Latin, history and geography, Madame Royale was instructed in music by the queen and Madame Elisabeth , the youngest sister of Louis XVI, in this detention. Her father King Ludwig was beheaded on January 21, 1793, her mother Marie Antoinette followed on October 16, 1793. Rumors circulated that Marie Thérèse was sexually abused by prison guards while she was in custody in the Temple and could even have become pregnant as a result. 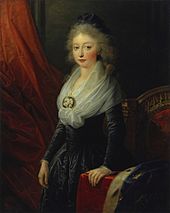 Marie Thérèses brother Louis Charles , who was the last Dauphin since the early death of his older brother, died on June 8, 1795 in Paris. Princess Marie Thérèse was now the only surviving child of the former French royal couple. Only in August 1795 was she informed about the fate of her parents. She was finally released on December 18, 1795, the day before her 17th birthday. They were handed over on December 26, 1795 near Basel in exchange for Armand Gaston Camus , Pierre Riel de Beurnonville , Jean-Baptiste Drouet , Hugues-Bernard Maret , Nicolas Marie Quinette , Charles Louis Huguet and 16 other French prisoners of war. She has now been brought to Vienna , the birthplace of her mother. She arrived at the Viennese court on January 9, 1796, 22 days after her liberation from the Temple.

Tomb of Marie Thérèse of Bourbon in Kostanjevica

Marie Thérèse married her French cousin Louis Antoine d'Artois, Duke of Angoulême, on June 10, 1799, against the wishes of her cousin, Emperor Francis II . Since she was the only survivor of the royal family, the Bourbon foreign assets were to be preserved for the rest of the family.

Marie Thérèse played an important role during the Restoration in France (1814 / 1815-1830) and campaigned for the complete restoration of the monarchy. After a few years asylum seekers at befriended royal courts, one of her uncle was named Louis XVIII. move to Paris with his court in 1814 as King of France. Until his death in 1824, Ludwig's policy was largely influenced by the Duchess of Angoulême. After his death, another uncle of the Duchess took over the rule as Charles X of France.

At times she took over the education of her nephew Henri, Duke of Bordeaux and her niece, the later Duchess of Parma Louise Marie Thérèse d'Artois . A close relationship of trust developed between the Duchess and the two children. The Legitimists and Marie Thérèse saw in Henri the future ruler of France.

The 1830 Revolution that brought Louis-Philippe of Orléans to the throne, the Duchess was forced to leave France again. Charles X of France died in exile in 1836. According to the Legitimists, his son Louis-Antoine - her husband - followed him as Louis XIX. to. Thus, according to the legitimist view, Marie-Thérèse was titular queen of France until the death of her husband.

After the Duke of Angoulême's death in 1844, the Duchess finally moved to Schloss Frohsdorf . Since her own offspring had failed, she often sought the presence of children. In 1850 she traveled to Venice and Parma. At the beginning of 1851 she visited her relatives in Vienna.

Marie Thérèse wrote her will on July 1, 1851. On October 13, she fell ill with pneumonia with pleurisy and subsequently died on October 19, 1851 at 11:17 a.m. at Schloss Frohsdorf. Her body was then buried on October 28th in the Franciscan monastery Kostanjevica in Nova Gorica in today's Slovenia .

Myth of the Dark Countess

Since 1852 at the latest, some historians have been of the opinion that Marie Thérèse was impregnated during her imprisonment in the Temple or suffered from psychological problems and was no longer up to her task of representing the royal family abroad. As a result, according to a substitution thesis, she was replaced by her alleged half-sister Ernestine Lambriquet , who from then on posed as Princess Marie Thérèse of France and later as Duchess of Angoulême.

The real Marie Thérèse, on the other hand, had to hide from the public. After various stays all over Europe, she lived with her companion in Hildburghausen in Thuringia from 1807 and in the nearby Eisausen Castle from 1810 . She is the mysterious woman who led a secluded life in the Schloss von Eishausen until her death in 1837, closely monitored by her companion, and who was later called the " Dark Countess " because of her frequent veils . The companion died in Eishausen in 1845 and is buried in the local cemetery with the name “Dunkelgraf”. After his death, a letter was found in which he reported that the deceased originally came from Westphalia. She was 58 years old when she died and her name was Sophia Botta. Nevertheless, the myth persisted that Marie Thérèse de Bourbon was the Dark Countess.

On October 15, 2013 the unnamed grave of the Dark Countess was opened for a DNA test . Coffin nails and parts of a skeleton were recovered. A DNA comparison with descendants of Marie Antoinette's family living today showed that Marie Thérèse de Bourbon could not have been the mysterious Dark Countess.

However, the DNA test does not refute the theory of the princess being exchanged and the rumor continues to circulate. It can only be said that the Dark Countess and Marie Thérèse were two different people. Possible indications of a mix-up are, among other things, that portraits of the princess from her youth bear little resemblance to the Duchess of Angouleme. Contemporary witnesses also claim that the young princess had different (softer and more sociable) manners than the decisive and dominant Duchess of Angouleme. Whether there is any truth in the rumors must remain open in one direction or the other until there is definitive evidence.