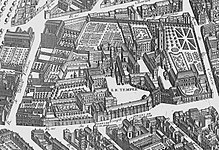 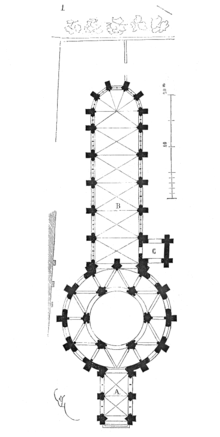 Plan of the Templar Church according to Viollet-le-Duc

Temple is the name for both his time outside Paris Located religious area La Ville Neuve du Temple , where the Templars after the fall of Acre in 1291 settled, as well as the built there Keep Tour du Temple , in the under Philippe the Fair the French treasury was stored and later a prison was built. The name was finally transferred to the 3rd arrondissement , in whose area the area of ​​the order lay. Nothing remained of the buildings.

The Templars had their home in Paris, the Temple , from around 1130 near Saint-Jean-en-Grève. A Nouveau Temple behind Saint-Gervais soon replaced the Vieux Temple . After the fall of Acon in 1291 , the Temple was the ordinary residence of the Grand Master. On the morning of October 13, 1307, the wave of arrests against members of the Templar Order began, which also hit the Temple in Paris. 138 of the 546 Templars in Paris were arrested here. Since the arrest warrant also included the expropriation of the treasured Templar treasure , the king's militias suspected the gold treasure in the Temple, but searched in vain for it. After the fall of the Templars, the trials of the most important incumbents such as Jacques de Molay and others by King Philippe the Fair from June 1308 and especially after the papal bull Vox in excelso of 1314, the area was handed over to the Order of St. John , who was there until secularization held sovereignty during the French Revolution in 1791. This order district, the Enclos du Temple , was in the northeast of the Marais . The area, separated from the rest of the city by a wall, developed mainly during the 17th and 18th centuries with the construction of hôtels particuliers , streets and commercial areas, which grew into a city within the city alongside the religious buildings.

The privileges from the Middle Ages, such as freedom from guilds and church asylum , drew people from all walks of life into the temple: In addition to the friars, free traders, traders, nobles and citizens who sought protection from the royal police lived in the approximately 125 hectares of the Rue du Temple. A very heterogeneous society of different social classes emerged who lived there independently of one another.

The Temple did not have a particularly good reputation in Paris: In the eyes of the Parisian population, the mixture of semi-criminals, businessmen and pleasure-loving nobles gave the actually religious district a sinful appearance. In particular, the Grand Prior of the Order of Malta, Jean Philippe François d'Orléans (1702–1748), celebrated extravagant evenings that consolidated the temple's libertarian reputation. His successor Louis-François de Bourbon, prince de Conti , became Grand Prior in 1749 and held an important salon in the Palais du Temple , in which the philosophers of the Enlightenment such as Jean-Jacques Rousseau and Beaumarchais met with the Parisian aristocracy.

French Revolution and after

The temple was best known again during the French Revolution, when Louis XVI was there in 1792 . and held the French royal family captive after the Tuileries storm . The unexplained death of Louis XVII. in the Temple there was and still is the breeding ground for legends about the real whereabouts of the king's son. The district, which was secularized during the French Revolution, deteriorated more and more towards the end of the 18th century. Haussmann's plans finally destroyed the old facilities in the middle of the 19th century, so that today nothing is left of the old temple apart from a few houses. Today the town hall of the 3rd arrondissement and the Square du Temple stand on the grounds of the palace. 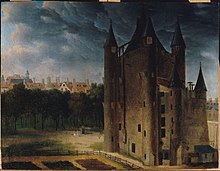