Belarusian is a redirect to this article. Further meanings are listed under Belarusian (disambiguation) . 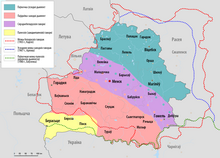 Alongside Russian and Ukrainian, Belarusian is one of the three still-living East Slavic languages that developed in the Middle Ages from a common predecessor language of Rus , Old East Slavonic . The direct predecessor of the Belarusian language was the Ruthenian language , which was spoken from the 15th to 18th centuries in the East Slavic areas of the Grand Duchy of Lithuania and the aristocratic republic of Poland-Lithuania .

In the Grand Duchy of Lithuania

From the 14th century the developed at the court Lithuanian Grand Duke in Vilnius own, on the Ruthenian (the forerunner of the Byelorussian) based firm language , was the official language of the Grand Duchy of Lithuania.

With the expansion of the Grand Duchy of Lithuania to the entire west of the former Kievan Rus , it also took on Ukrainian elements. After the Lithuanian personal union with Poland , it came under very strong Polish influence . (For more details, see Ruthenian language .) After the smashing of the Polish-Lithuanian state (1795), this written language became more and more out of use.

However, as early as the first half of the 19th century, the first literary works were written in a new Belarusian written language based on the north-eastern dialects of Belarusian (the first work is an anonymous translation of the Aeneid between 1812 and 1830 , Eneida nawywarat “Aeneis turned around").

It was only after the revolution of 1905 that books and newspapers could legally be printed. From 1903 to 1911 the important work Belorussy was published in Warsaw . Jazyk belorusskowo naroda by Jauchim Karski, in which the written language was codified. The magazine Nascha Niwa (“Our Corridor”) , published from 1906 onwards, also played an important role during this period .

In 1917 the first attempt to found their own Belarusian state failed , after which most Belarusians lived in the Soviet Republic of Belarus , a smaller number in Poland. In the Soviet Union , Belarusian was able to develop freely until the end of the 1920s, after which it came under significant pressure from Russian again. In 1933 an approach to Russian was forced through an orthographic reform, and vocabulary and grammar have since been under Russian influence. The same fate befell Belarusian in the Polish territories that were annexed to the Soviet Union in 1939.

It was not until perestroika that the written Belarusian language was revived, which was declared the state language of the Soviet Republic of Belarus in January 1990. The brief bloom that followed, known as “rebirth” ( Adradschenne in Belarusian ), ended when President Lukashenka introduced Russian as another official language in 1994/95. There were also efforts to reintroduce the traditional spelling, which was abolished in 1933 ( known as Taraschkewiza, Taraškievica, тарашкевіца , or as the "classic variant" after its developer Branislaŭ Tarashkewitsch ). Since then, two systems have in fact been competing, namely the Taraškievica (preferred by emigrants and active Belarusian speakers ) and the Soviet Narkomauka (наркомаўка, still the official standard to this day).

At present, written Belarusian is spoken by only a small intellectual class in the cities. Belarusian dialects are widespread in the country as well as a transitional form between Belarusian and Russian, which is pejoratively referred to as Trassjanka (“cattle feed”); most of the city's population speaks Russian. Belorussian is only weakly anchored in the education system. In the summer of 2003, against strong resistance from students and teachers, the only grammar school with the Belarusian language of instruction was closed. The prognosis is rather bleak, many Belarusians fear that a complete absorption of Belarusian in Russian can hardly be prevented. The situation of the Belarusian language in Belarus is similar to the situation of the Irish language in the Republic of Ireland . Also has come up with a motion that the West Pole Maltese to their own language to expand will result in a further fragmentation. However, after the annexation of Crimea by Russia, a stronger promotion of the Belarusian language can be observed, whereby a certain substantive rapprochement between the state leadership and the often oppositional intellectuals can be observed.

The letter inventory corresponds roughly to that of Russian and Ukrainian. Typically Belarusian is the letter ў, which occurs only in this language (except in Dungan in Kyrgyzstan and in Yupik of the Chukchi Peninsula ), and the trema is mandatory when spelling ë (unlike in Russian). Belarusian lacks the Russian letters и, щ and ъ (it also has і and ў). Compared to Ukrainian, it lacks the letters ї and є (instead it has ы, э, ë and ў).

The spelling of Belarusian is phonetic, which means that it is largely based on the pronunciation. This also means that, unlike in Russian, the unstressed o is replaced by the a, which corresponds more to the pronunciation. This creates a clear difference between the typeface and Russian and Ukrainian, cf. For example, Belarusian вада "water" versus Russian вода - the words are pronounced the same.

The letter combinations дж and дз are sometimes treated as separate units, since they only denote one sound. In these cases they follow in the alphabet as separate letters after д.

One problem with Belarusian orthography is that both the sound h and the sound g are represented by the letter г. Until 1933 a separate letter ґ was used for g (as in Ukrainian), its reintroduction is being considered.

The spelling of Belarusian in Latin script ( Łacinka ) is based on the Polish orthography, but also has special characters with diacritics ( š, č etc.) and uses (unlike Polish) the letter v instead of w . A phonetic spelling is also characteristic for them ("water" then means vada ).

The grammar of Belarusian is not much different from that of other Slavic languages. In detail, the following can be said:

The Belarusian vocabulary is made up of different layers. In addition to the Slavic hereditary vocabulary and some influences from Church Slavonic , borrowings from Polish are characteristic, which, on the other hand, are largely lacking in Russian. Compare, for example, Belarusian дзякаваць (Dsjakawaz) “thank” to Russian благодарить (Blagodarit) and Polish dziękować , Belarusian цікавы (Zikawy) “interesting”, like Polish ciekawy , and Polish linguists (their own) tried to use Polish ciekawy etc. in the interwar period Forming words on the basis of dialect words, but from 1933 the technical vocabulary was specifically Russified.

There are also two Belarusian versions next to each other in Wikipedia :

Wikipedia in Belarusian (normative) - abbreviation: "be"