The dinosaur - the atrium of the Senckenberg Museum in Frankfurt a. M.

Natural history museums differ significantly from science centers , which only do public relations work - without their own collections and research. The classic collection areas include geology and mineralogy , paleontology (geological history), botany , zoology , but also often ethnology (ethnology). The immense collection can already be explained by the fact that today more than two million different species of living beings are known. Natural history museums are among the most visited cultural institutions in the world. 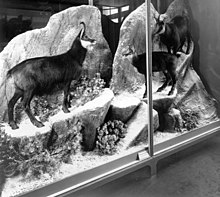 Ecology of the Mountains, Museum Wiesbaden , 1924

The historical roots go back to the collections of princes ( natural history cabinets ), to academic collections of universities and teaching institutions and collections of natural science associations . With the strengthening of the bourgeoisie , the first major research trips , industrialization and science , which was now heavily influencing society, numerous natural science museums were founded in the 19th century. Up until the 1920s, this branch of the museum experienced immense growth, whereas since the middle of the 20th century there has been a reduction in funding in almost all museums in Europe . In North America in particular , natural history museums are still heavily promoted today.

The way the exhibitions are held has changed significantly since the end of the 19th century. Originally, representative representatives of all natural objects should be present in the collection and also shown. Therefore, scientific collections and display collections were still united. As the size of the collection increased so much that it was impossible to see it permanently in the exhibitions, especially due to the increasing trade and numerous research trips, the separation of the collection and the exhibition began. In addition, current topics gained in importance during this time, which first supplemented the originally systematically structured exhibitions, and later even replaced them. The most important topics now included biogeography and ecology . The natural history museum thus also became a place of experience that presented mostly exotic places and their environment. Particularly in the second half of the 20th century, increasing importance was attached to good visitor guidance, didactically prepared presentations and multimedia use. Special forms of the natural history museum are also increasingly establishing themselves, such as the simultaneous presentation of live animals in the exhibitions (e.g. Löbbecke Museum & Aquazoo in Düsseldorf ). But there are also backward-looking tendencies, such as the new exhibition in the Muséum national d'histoire naturelle in Paris, which clearly takes up aspects of the natural history cabinet. 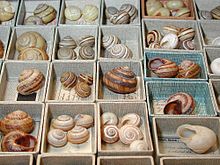 Collection of snails in the Wiesbaden Museum

The natural history museums preserve natural objects in immense numbers. These serve science as evidence and research basis. The so-called type specimens , after which initial descriptions were made, are particularly significant . Preservation is particularly complicated because the majority of these are organic materials that naturally spoil. Therefore, they have to be prepared and preserved beforehand. In addition, these collections must be protected from unfavorable climatic conditions and pests (mostly insects ). Here, curators , taxidermists and collection technicians also sought the collections in appropriate order to build - usually systematically . 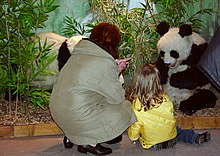 In addition to offering guided tours and lectures , museums present exhibitions to the public. A distinction must be made between permanent and special exhibitions. The latter have become increasingly important over the past few decades. The natural history museums are thus also fulfilling their educational mandate, as they are predominantly in public hands . A positive aspect is the high proportion of young visitors who find their way to this cultural institution thanks to more attractive forms of presentation, but also to spectacular exhibits .

Classically, the scientists employed as curators at natural history museums are systematists in their respective disciplines . This is due to their activities in the collections. For example, you conduct phylogenetic studies in biology or write revisions of certain animal groups ( taxa ). As these subjects are increasingly being lost at European universities, museum scholars are now even more important for the preservation of our natural environment . Only thanks to this selection of systematically working scientists can a considerable proportion of the world of life known to us today be understood and further explored. Numerous museums cooperate with universities or are themselves part of these research institutions. In addition, the natural history museums make their collections available as a database for research.