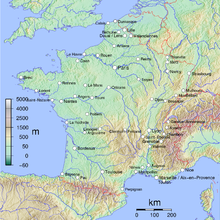 The list of cities in France (excluding French overseas territories ) provides an overview of the development of the population of the larger cities of the state of France .

The largest agglomeration ( Unité urbaine ) in France is Paris with 10.5 million inhabitants. This means that 16.2% of the country's people live in the capital region alone. According to the National Institute for Statistics and Economic Research (INSEE) (as of January 1, 2010), the largest agglomerations are :

The following table contains the cities with more than 50,000 inhabitants, the results of the traditional population censuses (VZ) of March 4, 1982, March 5, 1990 and March 8, 1999 as well as the rolling census (survey with rotating samples) of January 1, 2006 and 1st January 2014. With the rolling census system, INSEE surveys a part of the population every year, the scope of the surveys being based on the size of the community. The region and the department to which the city belongs is also listed. The population figures refer to the respective municipality within its political limits, without politically independent suburbs.