Tourcoing [ tuʀkwɛ ] ( Dutch Toerkonje ) is a French town in Nord in the region of Hauts-de-France . Tourcouing is the neighboring town of Roubaix and is not far from Lille . Tourcoing has 97,368 inhabitants (as of January 1, 2017).

Tourcoing is located on the Belgian border and belongs to the Métropole Européenne de Lille . In this area, the Franco-Belgian border often follows urban roads and runs through gardens and densely populated areas. The neighboring municipalities are Neuville-en-Ferrain in the north, Mouscron (Belgium) in the north-east, Wattrelos in the east, Roubaix in the south-east, Croix and Wasquehal in the south, Mouvaux in the south-west, Bondues in the west and Roncq in the north-west. 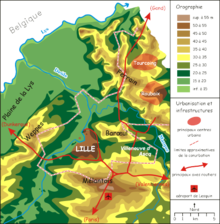 Topography of Tourcoing and the surrounding area

Tourcoing is located in the hill country northeast of Lille, north of the valley of the Marque (see topographic map).

Tourcoing was first mentioned in 1080 as the seat of Baudouin II of Gand-Alost. At that time there was a walled and moated castle there. In 1294 Tourcoing was sold to William I of Mortagne. With the Hundred Years War and the plague, hard times came for Tourcoing. Until it was donated to Baudouin de Lannoy in 1485, Tourcoing had developed into an important market town with 3,000 inhabitants and a center of textile production. After the peace treaty, Tourcoing returned to the production of fabrics. In 1668 it came to France. The streets were paved, the Grand Square was dominated by the stately castle, the Church of St Christophe and the town hall. When the North Department was formed in 1789 , worsted spinning continued to be typical of Tourcoing. After the inauguration of the railway line in 1842, the population grew and the townscape was dominated by spinning mills, dye works, factories and shops. In 1865 35,500 people found work in the textile industry, the New Town Hall was completed and the old castle was replaced by market halls. Major projects have been implemented with the Boulevard Gambetta to Roubaix , the Grand Boulevard to Lille and the Boulevard d'Égalité , a building of the century . In 1877 the streetcar appeared. In 1906 the International Textile Exhibition was opened.

During the First World War, Tourcoing's civilian population suffered under occupation for four years. The Germans entered the city on October 12, 1914 and left on October 17, 1918. Extensive confiscations were added to the usual supply problems. The residents even had to leave their beds to German soldiers. The dean of the Saint-Christophe church wanted to prevent the occupiers from melting down the church bells, after which he was sentenced to ten years in prison.

Tourcoing was cut off from the rest of the country; the population received no news of any kind from relatives or family members serving in the French army. The fate of the kidnapped hostages and civilians deported to labor camps in Germany or Lithuania also remained unclear. At Easter 1916 alone, 4,176 men and women were rounded up and transported to labor camps in the Ardennes.

During the Second World War Tourcoing - like all of the north of France - was occupied practically without a fight during the western campaign . The headquarters of the XV. Army of the Wehrmacht was in Tourcoing. It was responsible for 230,000 soldiers. From September 1942, the Germans began extensive construction work after Tourcoing had been bombed and after an Allied attempt to land in Dieppe ( Operation Jubilee ). Parts of this headquarters are now a museum. On June 5, 1944 at 9:15 p.m. the Germans received the code name that signaled to the French Resistance that an invasion was imminent. The Resistance then began with acts of sabotage on the infrastructure, e.g. B. Telegraph Poles.

Even after the Second World War, the city had to be rebuilt. Little by little, spinning mills, weaving mills and jersey factories for stockings, socks, pullovers and underwear were re-established. In 1960 there were 174 spinning mills in Tourcoing again, but 160 of them closed again by 1980 . By 1986 , the Center Mercure , the Center de Gaulle , the Bourgogne and the Dron Clinic were rebuilt.

Tourcoing is a stopover for regional trains from Lille to Antwerp and from Lille to Kortrijk . Moreover, it is Tourcoing station on the TGV - line to Paris Nord .

Municipalities in the Arrondissement of Lille