The title of this article is ambiguous. Further meanings are listed under Dunkerque (disambiguation) .

Dunkerque [ dœ̃kɛʀk ] or [ dɛ̃kɛʀk ] ( German : Dunkirk ; Dutch : Duinkerke (n); English : Dunkirk; French-Flemish : Duunkerke ) is a French port city on the southern North Sea coast or Channel coast in the North department in the historic West Flemish language area of French -Flanders . The northernmost city of France, located around ten kilometers west of the border with Belgium , has 87,353 inhabitants (as of January 1, 2017), with the suburbs there are around 250,000. It lives from the harbor and from large industrial settlements and houses a university with around 10,000 students.

Dunkerque gained historical importance during the time of King Louis XIV , his fortress builder Sébastien Le Prestre de Vauban and the corsair Jean Bart, who was born in this city . The place name is now reminiscent of one of the most important episodes of the Second World War : In 1940 the British Expeditionary Force (BEF) and parts of the defeated French army were surrounded by the Germans here in the Battle of Dunkirk .

Dunkerque was first mentioned in a document in the 7th century as a fishing settlement . Thanks to its strategically favorable location at the entrance to the English Channel , the town developed rapidly: a city ​​wall was built in 960 and the first town hall was built in 1233 . An important industry in Dunkirk for centuries was fishing for herring and later for cod off Iceland . 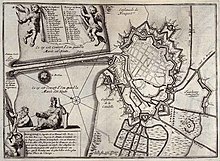 On the other hand, the city's location has always aroused desires. In the course of their history, the “German” -speaking ( Lower Franconian and Dutch ) residents initially belonged to Flanders , Burgundy and the Spanish Netherlands . In 1646 Dunkirk was conquered by France and the Netherlands after a month of siege and fell to England in the Anglo-Spanish War after the Battle of the Dunes in 1658 . Finally, on October 17th, the city became Jul. / October 27, 1662 greg. sold for five million livres by King Charles II of England to King Louis XIV of France . From then on, the city was surrounded by strong fortifications under Vauban . In the 17th and 18th centuries, Dunkirk was a base for French corsairs . In the 19th century, the city rose to become the third largest port in France.

During the First World War , the city was the target of German bombings and offensives, such as the First Battle of Flanders .

In the Second World War , in the spring of 1940, Dunkirk was largely destroyed in the fighting between the German Wehrmacht and the encircled British Army at the Battle of Dunkirk . In Operation Dynamo , the Royal Navy was able to save most of the French and British troops that had fled to the city for Great Britain. From 1940 which maintained naval one in the city of naval hospital . After Operation Overlord Dunkirk 1944 by the Wehrmacht to Atlantic fortress declared until the war ended defended and only on May 9, 1945 the day after the surrender occupied by the Allies.

In the wake of the refugee crisis in Europe , after the evacuation of the Calais jungle in October 2016, Dunkerque became the target of numerous refugees and migrants who hoped to gain access to the United Kingdom from there . In February 2017, around 2000 people had already gathered in the camp near Grande-Synthe , where they lived under sometimes precarious conditions.

In 2002, Dunkerque was voted the sportiest city in France with more than 20,000 inhabitants by the major sports newspaper L'Équipe .

The cycle race, the Four Days of Dunkirk , which has been taking place at the beginning of May since 1955, is internationally known . Even Tour de France -Etappen found already taken in Dunkerque, most recently 2007 . In 2001 the Grand Depart, the start of the tour, was held here.

Every year a triathlon of the prestigious French club championship Lyonnaise des Eaux , which is made up of top-class international legionnaires, takes place in Dunkerque , for example on 23 May 2010 with Andrea Hewitt and Jonathan Brownlee as winners.

The handball club Dunkerque Handball Grand Littoral won the French Cup in 2011 and was in the final of the EHF Cup a year later .

The carnival is the main event in the city. It takes place in Dunkerque and its suburbs from late January to early April.

Parts of the carnival are:

In 1676 there was a masked parade in Dunkerque. In the 17th and 18th centuries, shipowners offered their seafarers a feast the day before they left for Iceland. These celebrations were the origin of the Visschersbende (fishermen's guard). However, this event was separate from the Mardi Gras mask carnival . A year later, the two events took place on the same day, which started the Dunkerque Carnival. The carnival survived the French Revolution and the two world wars. In 1946, the band slalomed through the ruins of the city.

Panorama of Dunkerque, taken from the Dunkirk Belfry

Municipalities in the Arrondissement of Dunkerque