The title of this article is ambiguous. Further meanings are listed under Annecy (disambiguation) . 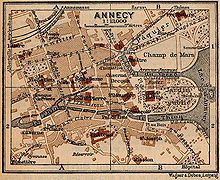 Annecy [ ansi ] is the Grand Est city with 126,924 inhabitants (at January 1, 2017) and the capital of the department of Haute-Savoie in the region of Auvergne Rhône-Alpes .

In 2012 Annecy was named Alpine City of the Year .

Annecy is located in south-east France, on the northern tip of the 27 km² large lake Lac d'Annecy , 40 km south of the Swiss city ​​of Geneva . The Thiou Lake flows through the old town as a natural outflow and flows into the Fier after only 3.5 kilometers . The Canal du Vassé, once built to supply the defensive ditches with lake water, is now partially underground.

The municipality is associated with the Massif des Bauges Regional Nature Park as an access point .

Anniciaca was the original name of the town of Annecy-le-Vieux (German: Old Annecy), which is located immediately northeast of Annecy and incorporated in 2017, near a country house belonging to a Roman named Annicius.

View over the roofs of the old town

The banks of Lake Annecy have been around since at least 3100 BC. Settled. 50 BC A Roman settlement was founded on the site of the city under the name Boutae or Bautas. In 259 the market town was destroyed in raids by “barbarians” and part of the population was killed. Some of the survivors founded Anniciaca in the nearby hills. The attacks were repeated until the 6th century, whereupon the last inhabitants of Boutae gave up.

In the 7th century the place on the banks of the Thiou was repopulated. The first written mention of today's Annecy comes from the year 1107, when the place was built between the first church Saint-Maurice and the castle Château d'Annecy, which is currently under construction . Armed conflicts with the bishops of Geneva led to the flight of the counts of Geneva to Annecy, who made the place their capital. The last Count of Geneva was the antipope Clement VII (1342-1394), born in Annecy .

In 1401 the place with the county of Geneva was sold by Odo von Thoire and Villars to Amadeus VIII from the House of Savoy , in 1444 the latter created an appanage for a member of his family, to whom he assured extensive autonomy. Janus, the fifth son of Louis the Elder , made Annecy his residence and capital of the county. After his death, the place belonged temporarily to Savoy from 1491 to 1514 and then became an appanage again until the 17th century.

In the 15th century, Annecy comprised more than a dozen monasteries , half of the city as well as large estates and forests belonged to different orders . With the rise of Calvinism in nearby Geneva, the city became a center of the Counter-Reformation, and the Geneva bishopric was moved to Annecy. Structures such as the Saint-Pierre Cathedral date from that time . In 1602 Franz von Sales became bishop of the city.

Renaissance to the 20th century

During the French Revolution , the city was conquered by the revolutionary troops in late 1792 . Savoy lost its independence and became part of France. Annecy was added to what was then the Mont Blanc department , whose capital was Chambéry . The citizens of the city initially saw the Duke's expulsion as a liberation, but soon turned against him in view of the state's anti-religious policies. During the 23 years of its first affiliation with France, which opened the French market to the city, numerous factories were built on the banks of the Thious.

After 1815, Annecy was returned to the House of Savoy as a result of the Second Peace of Paris . After the annexation of Savoy to France in 1860 ( Treaty of Turin ) Annecy became the capital of the new Haute-Savoie department .

In 1866 the railroad reached the city, which encouraged the development of industry and tourism. At the turn of the century that followed, new districts emerged, and in 1906 a power plant on the Fier supplied electricity for the electrical lighting for the first time.

In June 1940 the Wehrmacht defeated France, at the time of the armistice the German soldiers were already not far from the city. The city council immediately recognized the authority of the Vichy regime and promoted the replacement of the republican prefect . In the Hôtel d'Angleterre one was after the armistice Italian observers Commission quartered. With the war veterans organization Légion française des combattants , from which the right-wing extremist Milice française emerged in 1943 , a paramilitary force of the Vichy government established itself in Annecy, which later collaborated with the occupying power . On September 23, 1941, the head of state of the "État français" (unoccupied zone) Philippe Pétain was in the city.

There was also resistance from the population, e.g. B. on May 1, 1942, when people were pacing back and forth in front of City Hall in response to a call from Radio London . In November 1942, Italian mountain troops ( Alpini ) were quartered in the Galbert quarter , which led to clashes with two fatalities the following year. The local warehouse factory was attacked by Allied bombers for the first time on December 11, 1942, killing five people in the Balmette district. In a second bomb attack on the warehouse in the Loverchy district on November 11, 1943, eleven people were killed. Its machines were destroyed three days later by saboteurs of the Resistance . A third attack on March 10, 1944, which affected the factory as well as the train station and the telephone switchboard, claimed another 11 lives.

In the winter of 1942/1943, resistance groups such as the Franc-Tireurs and the Armée Secrète established themselves in Haute-Savoie, and the deportations of forced laborers to Germany brought them additional influx. On September 8, 1943, the Italians left the city and the Germans invaded. This made the oppression stronger. The Wehrmacht occupied several hotels next to the barracks , and the Gestapo took up quarters in the villa of the warehouse manager. From then on, the milice resided in the commandery and the Groupe mobile , a paramilitary unit of the Vichy regime , in a brewery . The Saint-François School was used by the Germans as a prison, and a mass grave with seven dead was later discovered there. Between March 10 and March 13, 1944, the city was combed intensively, as a result 24 people were shot dead and around 20 people were deported. The Palais de l'Isle and the ship France also became prisons at that time.

The partisans of the Resistance operated by the high-level plateau of Glières from. The Germans attacked the Maquisards with artillery and airplanes and reached the area on March 27, 1944, and on May 1 they returned to the plateau. The Allied landing in Normandy in June 1944 led to increased attacks and acts of sabotage by the Resistance, but at the same time to increased repression and more frequent punitive actions on the part of the occupiers. In the Galbert district and in nearby Vieugy , the Germans shot hostages and convicts like the sub-prefect of Bonneville . Nevertheless, the partisans increasingly succeeded in conquering villages and later cities and isolating the Wehrmacht garrisons from one another. 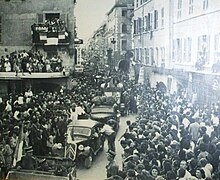 After negotiations in Chavoire , the German garrison laid down their arms in Annecy on August 19, 1944. The announcement of a list of more than a hundred citizens of the city to be shot by the Germans, including the prefect, the mayor, the bishop and all the prisoners of the Saint-François school, caused a storm of people on the quickly flagged streets . Those concerned were freed and the shop windows of the facilities of the occupiers and collaborators were destroyed. On the morning of August 24th, 76 members of the Milice convicted were shot dead in Le Grand-Bornand .

In the following years German prisoners of war were interned in Annecy . When it became known that French prisoners had been shot in Lyon , the Forces françaises de l'intérieur (FFI) shot 80 Germans, mostly members of the Security Police , the SD and the SS, as reprisals on August 28 and September 2, 1944 -Police Regiment 19 , which were previously involved in the brutal persecution of French resistance members. As a result, the members of the FFI were granted combatant status by the Germans . Charles de Gaulle visited the city in early November 1944 .

In the course of the war and the occupation, 136 people were killed in Annecy up to the day of liberation: 50 of them were directly victims of the Germans, 30 died in bomb attacks. The city administration estimated the number of destroyed or uninhabitable houses to be 150. 552 men from Annecy fell into German captivity , from which 55 were released on January 1, 1943. Of the 140 deportees , 50 did not return to the city.

In 1949, Annecy was the meeting place for the second round of negotiations for the General Agreement on Tariffs and Trade .

In the local elections of 2020, the candidate of the Greens (LECO), François Astorg, was elected as the new mayor. He won just ahead of Jean-Luc Rigaut (Union du center), who had held the post since January 2007.

Annecy has a metal , marine , textile , leather , food and wood industries . The city is a climatic health resort , tourism is an important economic factor.

Annecy is on the A41 motorway , which connects the city with Geneva in the north and Grenoble in the south. The national road N 201 leading through Annecy was downgraded to the department road in 2006 .

The city is connected to the TER Auvergne-Rhône-Alpes regional traffic and can be reached from Paris by TGV . Annecy has been one of the endpoints of the Léman Express since December 15, 2019, making it part of the largest cross-border S-Bahn network in Europe.

From 1898 to 1930 Annecy was connected to the small town of Thônes by the narrow-gauge Tramway d'Annecy à Thônes (TAT) .

In 1998 the Junior World Championships in athletics took place in Annecy .

There is also a cooperation regarding a technical and cultural exchange with the Ivorian Sassandra .

Annecy is involved in the Alpine City of the Year Association, together with other Alpine cities, for the implementation of the Alpine Convention , which aims at the sustainable development of the Alps.

Municipalities in the Arrondissement of Annecy