Annecy-le-Vieux is a commune Déléguée in the French town of Annecy with 20,866 inhabitants (at January 1, 2017) in the department of Haute-Savoie in the region of Auvergne Rhône-Alpes .

Annecy-le-Vieux is located at 480  m , about 3 km northeast of the city of Annecy (as the crow flies). The village extends over the plain on the north bank of Lake Annecy , in the Annecy basin, in the foothills of the Alps at the northwestern foot of Mont Veyrier , in the Genevois .

The area of ​​17.01 km² large municipal area includes a section of the Annecy basin. The main settlement area extends in the approximately 3 km wide plain that extends between the north bank of Lac d'Annecy and the course of the Fier river . It lies at an average of 450  m. This plain is bounded in the north-east by a moraine height that was deposited here by the ice age glaciers. In the north, the border always runs along the Fier, which initially flows into the surrounding plateaus in a notch valley , but below the confluence of the Filière the valley widens and now has a broad valley low.

In addition to the actual town center, Annecy-le-Vieux also includes various settlements and former hamlets that have largely grown together today, namely:

The municipality of Annecy-le-Vieux was settled very early. Remains of pile dwellings have been found on the banks of Lake Annecy . In Roman times there was a town called Boutae on the plain north of Lake Annecy , which probably had about 2000 inhabitants. At the site of today's Annecy-le-Vieux, a Roman named Annicius had a large estate built, which was baptized Anniciaca (Annicius's Estate). In the 6th century, Boutae was destroyed during the Burgundian invasions . The residents left the place and founded new villages in protected locations in the surrounding hills.

Some of the residents of the former boutae settled at the Anniciaca estate. This quickly developed into the most important village near the northern bank of Lake Annecy, which was fortified. It retained its importance until the beginning of the 12th century. The village appeared as an anericiacum in the documents in 867 , when King Lothar of Lorraine gave the area to his wife Theutberga. The names Anersiacum and Anessy have been handed down from a later period .

In the 19th and 20th centuries, Annecy-le-Vieux was also popular with artists because of its beautiful location. From around the middle of the 19th century, industries began to settle on the plain between Annecy and Annecy-le-Vieux, including the Paccard foundry, which was renowned throughout France. 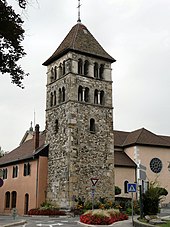 Romanesque tower of the Notre-Dame church

The Saint-Laurent church stands in the center of the old town of Annecy-le-Vieux. It was built in 1849 on the site of an earlier church that was destroyed during the French Revolution . The town's landmark is the associated Romanesque bell tower, which was taken over from the previous building. It was built in the 12th century. During renovation work in 1988, wall paintings from the 15th century were discovered.

In the old town center, numerous houses in the typical Savoyard style have been preserved. Particularly noteworthy are the Villa Dunand, the Château de la Pesse from the 14th century, the Château de la Cour, the Villa de la Tour (residence of the writer Eugène Sue ) and the Café Brunet.

Outside the center are the Provins and Frontenex chapels and the modern Albigny church. Another attraction is the beautiful beach on the north shore of Lake Annecy.

With 20,166 inhabitants most recently (as of January 1, 2013) Annecy-le-Vieux was one of the larger municipalities of the Haute-Savoie department. In the course of the 20th century the population increased continuously. Particularly strong growth rates were recorded during the 1960s and the first half of the 1970s. Over time, the entire level was built over with apartment buildings and industrial facilities, so that today there is no longer any visible separation between Annecy and Annecy-le-Vieux. Larger single-family home quarters were created in the preferred residential areas on the slope and on the heights of the plateau and near the lake. The village was part of the Annecy agglomeration.

Since the mid-19th century, Annecy-le-Vieux has developed into an industrial municipality and later a residential municipality. Industrial and commercial zones are located on the level and in the area of ​​Les Glaisins. Numerous high technology companies (IT and communication) as well as metal processing, precision mechanics and precision engineering companies are important. There are also numerous service companies, trading companies and shops.

Annecy-le-Vieux is also an important educational center. In addition to general schools through to high school, it is the location of a campus of the Université de Savoie, to which various institutes are affiliated, including an engineering school and the world-renowned LAPP (Laboratoire d'Annecy-le-Vieux de Physique des Particules).

The city is very well developed in terms of transport. It is crossed by the main road N201 that goes from Annecy to Saint-Julien-en-Genevois and on to Geneva . Other important road connections exist with La Roche-sur-Foron , Thônes and Faverges . The closest connection to the A41 motorway is around 4 km away. Annecy-le-Vieux is connected to Annecy by several bus routes. This means that Annecy Central Station on the railway line from Chambéry to Annemasse is easily accessible.