This article deals with the Prince-Bishop of Geneva. For further meanings see Francis Sales (disambiguation) .

Francis de Sales ( François de Sales; born August 21, 1567 at Sales Castle , Thorens-Glières , † December 28, 1622 in Lyon ) was Prince-Bishop of Geneva , based in Annecy , founder of the order , mystic and doctor of the church . He is the patron saint of writers , journalists , the deaf and the cities of Geneva , Annecy and Chambéry .

Francis de Sales at the end of his crisis in the chapel of St. Etienne-des-Gres, Paris

The episcopal coat of arms of St. Francis de Sales. His coat of arms slogan Non excidet "She will not go under" testifies to his optimism

1610: Francis de Sales gives the Sisters of the Visitation of Mary their religious rules

Francis de Sales on his deathbed in Lyons: December 28, 1622; Detail from the stained glass window in the Basilica of Annecy, France 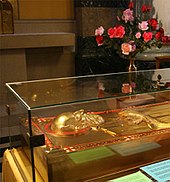 Reliquary of St. Francis de Sales in the Basilica of Annecy, France

Franz von Sales comes from a noble family from Savoy . His father was named François de Boisy , his mother Françoise de Sionnaz . He was the first of twelve children. The father wanted the best school education for his first-born. Franz enjoyed his first school lessons in La Roche-sur-Foron and Annecy. In 1578, when he was twelve years old, he came to the Collège de Clermont in Paris. Here he got into a personal crisis a few years later. He was familiar with the theological discussions of the Calvinist doctrine of predestination , which claims that God has established from eternity which man is destined to be saved and which man is destined to be damned. This teaching bothered him hard.

Francis de Sales even believed for a while that God had condemned him. In December 1586 his despair became so severe that he became physically ill. In January 1587 he was only able to drag himself to the church of Saint-Etienne des Gres with great difficulty. There he prayed the memorare and overcame his crisis by entrusting his whole life to God. Franz came to the conclusion: Whatever God plans to do with him, it will be good because God is love. With that he had become free. This trusting surrender to the God of love not only resolved his crisis, but also influenced his entire further life and teaching. His positive image of God and man as well as his optimism go back to this experience at the end of his crisis in Paris.

In 1588, Francis de Sales of Paris moved to the University of Padua . In addition to law, he also studied theology there. The resolve to become a priest was consolidated in him. In 1592 he completed his studies with a doctorate in both rights (ecclesiastical and secular law) and returned home after a pilgrimage via Loreto , where his father had already done a lot for his son's further legal career including a seat in the Senate of Chambéry . The father found it difficult to come to terms with the fact that his son was pursuing another professional goal.

On March 7, 1593 Pope appointed him Clement VIII. To the provost of Annecy. Franz was ordained a priest there on December 18 of the same year. Shortly after his ordination, he agreed to work on the reintroduction of the Catholic faith in the Calvinist part of the diocese of Geneva, the Chablais . Since the Calvinists forbade people to hear his sermons under penalty of punishment, Francis de Sales used the then new medium of the leaflet to get his thoughts to the people. And he was successful with it. After four years almost the entire population of the Chablais had returned to the Catholic faith. This “press action” was one of the reasons why Francis de Sales, in 1923, on the occasion of the 300th anniversary of the death of Pope Pius XI. was named the patron saint of writers and journalists.

Coadjutor of the bishop

In 1598 Francis de Sales traveled to Rome on behalf of his bishop Claude de Granier . There he not only reported on the situation in his diocese, but also passed a brilliant bishop's examination before Pope Clement VIII and a college of cardinals . In 1599 he was appointed episcopal coadjutor of the diocese of Geneva-Annecy with the right of succession .

At the end of 1601, Francis de Sales traveled to Paris on his first diplomatic mission to discuss the re-Catholicization of the parts of the diocese of Geneva that belonged to France with King Henry IV . However, his talks did not bring the desired success. Francis de Sales, however, impressed the people of Paris with his sermons. During this time he also got to know and appreciate Madame Barbe Acarie , who was later beatified as Marie of the Incarnation . At the time, she and her husband led a group of Christian lay people who wanted to renew religious life in France.

Prince-Bishop of Geneva based in Annecy

On his return from Paris, Francis de Sales learned of the death of his bishop. On December 8, 1602, he was ordained Prince-Bishop of Geneva in his home church of Thorens-Glières near Annecy . Since the city of Geneva was under the rule of the Calvinists , the bishops of Geneva had to reside in Annecy . His main activities as bishop in the next 20 years until his death were mainly the implementation of the reforms of the Council of Trent , the reform of the monasteries and the clergy. He was the first bishop to visit all 311 parish churches in his diocese and gave more than 3,000 sermons. He took care of the religious instruction of the children and the promotion of the education of the adults. To this end, at the end of 1606, together with Antoine Favre, he founded the Académie Florimontane , an educational institution similar to today's Académie française , in which the questions of modern science were not only discussed but also placed in the overall context of the Christian faith. As a lawyer, he was repeatedly asked for advice in disputes. He impressed the people with his great gentleness and warmth, which is why he is still referred to today as the " gentleman " among the saints. Franz von Sales also paid special attention to spiritual accompaniment. In many of the 20,000 or so letters he wrote in his life, he turned to people who asked him for advice on questions of life and faith.

Johanna Franziska von Chantal and founding of the Visitation of Mary

In 1604 Franz von Sales met the widow Johanna Franziska Frémyot, Baroness von Chantal . From this encounter a unique spiritual friendship developed, which led to the establishment of the religious order of the Sisters of the Visitation of Mary on June 6th, 1610, today also called Salesians or Visitands . Pope Paul V granted this religious community its worldwide recognition on October 6, 1618.

In 1609 he published his book Instructions for Pious Life , known in the German-speaking world under the title Philothea . This book, in which Franz von Sales explains in practical steps how people can realize their Christianity in their work and everyday life, became a bestseller. It is still one of the top ten in Christian world literature. Franz von Sales published his main theological work in 1616 with the title Treatise on the Love of God or Theotimus . With this work, Francis de Sales joins the ranks of the most important Christian mystics of the 17th century.

The last years of life

In 1618/19 Franz made his second diplomatic trip to Paris. There he met Angélique Arnauld , whom he visited in the Port Royal des Champs monastery , and Vincent de Paul . The occasion of the trip was the marriage of Prince Victor Amadeus of Savoy with Princess Christine of France, the sister of King Louis XIII. Francis de Sales played an essential part in the reconciliation of the French king with his mother Maria de Medici . His attempt to dissuade the young Cardinal Richelieu from interfering in politics as a bishop, however, failed.

His health suffered from his restless activity. His desire to resign from the office of bishop and retire to a hermitage to serve God with the rosary and the pen grew stronger and stronger. But this dream never came true. In late autumn 1622 Franz accompanied the Duke of Savoy to Avignon to meet King Louis XIII despite his poor health . On the way back he suffered a stroke in Lyon. Franz died at the age of 55 on December 28, 1622. His body was transferred to Annecy and buried at the end of January 1623 in the church of the Visitation Monastery in Annecy. Today he rests in the Basilique de la Visitation above the city.

The beatification took place on December 18, 1661 by Pope Alexander VII. On April 19, 1665 Francis de Sales was also canonized by Alexander VII . On July 19, 1877 Pope Pius IX declared him . for Doctor ecclesice ( Church teacher ). On the occasion of the 300th anniversary of his death on December 28, 1922, Pope Pius XI appointed him . the patron saint of Catholic writers and journalists. (See also encyclical Rerum omnium perturbationem .) In addition, Francis de Sales was in 1869 by Pope Pius IX. has been named Patron of the Deaf and Patron of the cities of Geneva, Annecy and Chambéry.

Living Salesian also means being Christian in everyday life ... Small virtues: humility, gentleness, patience, warmth, optimism . Sales is based on the word of the biblical creator about the living things of the world, they should bear fruit, each according to its kind (Gen 1:11). Everyone is called to bear fruit. A bishop cannot and should not live like a monk. Spouses not like Capuchins and craftsmen not like contemplative religious, praying half the day. But God wants all fruits, each according to its own kind. Francis de Sales created a new unity between profession and religion. 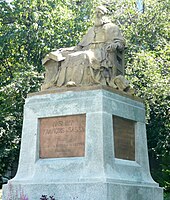 German edition of the works