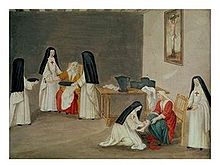 Nuns of the monastery nursing the sick

Port Royal des Champs , commonly spelled Port-Royal , was a convent of the Cistercians southwest of Versailles . In the 17th century it was an important stronghold of Jansenist ideas, especially under the abbess Angélique Arnauld (1591–1661). The sisters at Port-Royal were of the grace doctrine of St. Augustine coined. Their approach to the Christian life was based on personal unpretentiousness and trust in God's grace.

This movement found many followers in France and as far as the Netherlands . Attracted by the spiritual power emanating from this doctrine, some intellectuals settled in the vicinity of the monastery, who were subsequently referred to as Messieurs de Port-Royal or Solitaires (hermits) of Port-Royal, among them the Mathematician and philosopher Blaise Pascal and the playwright Jean Racine .

The circles around Port-Royal saw themselves as strictly Catholic and were popular with the upper classes of educated France. There was considerable tension with the Jesuits , who were seen by the sisters as exaggeratedly mild confessors. At the instigation of Louis XIV , the monastery was destroyed in 1710 and is now a museum.

The spirit of the monastery. Angélique Arnauld

The nunnery was founded in 1204 near the existing monastery of Les Vaux-de-Cernay and was accepted into the Order of Cîteaux early on .

In 1602 , Jacqueline Arnauld became Abbess of Port Royal under her religious name Angélique . When she turned 17, she initiated a reform process that was to emphasize monastic asceticism and penance more. For a while she was in contact with Francis de Sales , whose newly founded Order of the Visitation of Mary ( Salesians ) she wanted to join, but he dissuaded her again.

Angélique argued that every nun should strive for holiness, which included observing inner emotions, praying, fasting, poverty, self-torment and works of charity.

Because the damp, swampy climate of Port Royal was not conducive to many nuns - malaria even claimed deaths - the sisters moved into a newly acquired house in Paris, Port Royal de Paris, in 1625 . When it got too small, some returned to Port Royal des Champs in 1648. Much had happened in the meantime.

The bishop of Langres , Sébastien Zamet , had won over the abbess to found an order for the veneration of the Holy Sacrament . It was true that a quarrel soon broke out again because both had very different ideas about how the new monastery to be built in Paris should be equipped - Angélique's sister Agnès eventually became its abbess. But uninterrupted adoration of the Holy Sacrament played an important role for Port-Royal from then on. 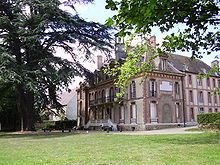 When an edifying pamphlet by Agnès was condemned by the Sorbonne for making theologically problematic statements , an anonymous defensive pamphlet appeared, the author of which turned out to be Jean Duvergier de Hauranne , the Abbot of Saint-Cyran - he is also known by the latter name. Saint-Cyran, a friend and student of the founder of the French oratorians , Pierre de Bérulle , was considered the head of the dévots , the devout Catholics, after his death , and Angélique Arnauld and her nuns made him their spiritual leader. Under the impression of his personality, Antoine Le Maître , a nephew of Angélique, and several of his brothers and friends, including Louis-Isaac Lemaistre de Sacy (1613–1684), Pascal's later interlocutor , settled in Port Royal des Champs from 1638 : You moved into a few barns near the monastery (Les Granges) and founded the Petites Écoles , schools with a demanding training program that became a magnet for the French upper class. I.a. Racine grew up here later as an orphan. From the teaching and research activities of the "Hermits of Port-Royal", among other important works, the Grammaire générale et raisonnée ( Grammar of Port-Royal ) by Antoine Arnauld , Angélique's famous younger brother, the Logique ou l'Art de penser ( Logic von Port-Royal ) by Arnauld and Pierre Nicole , and the only French translation of the Bible from the 17th century.

After France, under Richelieu, entered the Thirty Years' War on the side of the Protestant princes in 1635 , the latter saw a considerable threat in the devout Catholics, especially in the circle that was forming in Port-Royal, and therefore set up Saint-Cyran in 1638 without further ado captured. Although the examination of his writings did not reveal any heretical content, he was imprisoned for five years. Saint-Cyran died shortly after his release in 1643 and was quickly seen as a martyr . The messieurs of Port-Royal sided with the opponents of the king and his cardinal in the uprising of the Fronde from 1648 onwards and thus attracted a long-lasting hostility from the court.

The dispute over Jansen begins

At the same time the dispute over the Book of Augustine was emerging . This was written by Saint-Cyran's friend Cornelius Jansen , Bishop of Ypres and professor at the University of Leuven , and published in 1640, two years after the author's death. Already from 1597 to 1607 by the Vatican was de auxiliis Congregation in the so-called grace dispute the contrast between the views of Jesuit theologians about human free will and on Augustine declining doctrine of the absolute dependence of man on God's grace has been negotiated. Jesuit teaching was long before condemnation, but Pope Paul V decided that the question should not be discussed further. The Jesuits now appealed to this decision in view of Jansen's book. In 1641 Urban VIII condemned it with the bull In eminenti apostolatus specula , along with all the writings that were supposed to deal with it argumentatively.

Antoine Arnauld disregarded this prohibition and tried from 1644 in several writings to show that Jansen had written precisely in the spirit of the papal congregation of 1597. However, his opponents accused him of disseminating the ideas of the Geneva Calvinists or of attempting to undermine Christianity at all. In other writings at the same time he attacked the Jesuit practice of the sacraments and the for the time immensely liberal moral ideas of the Jesuits - initiatives for which he again had numerous supporters.

The five theses and the form

In 1649 the syndic (lawyer) of the Sorbonne declared that he had discovered five heretical theses in his theses, which came from Jansen's book of Augustine. The theses were formulated in such a way that they could be read both orthodox and heretical - which Arnauld immediately emphasized in his reaction. In the literal sense, however, only one came from Jansen. When the case was presented to the Pope, Arnauld also turned to him, but Innocent X. ruled against him in 1653 with the bull Cum occasione and declared that all the incriminated theses came from Jansen's book and that it was up to the Pope to determine in which Sense they are meant by the author.

Arnauld first recommended accepting the papal condemnation of the five theses, since they would not be condemned in the sense in which Jansen had formulated them. This question, in turn, split Jansen's partisans. Blaise Pascal, for example, didn't want to get involved in such subtleties. While another statement by Arnauld was used by his opponents to exclude him from the Sorbonne, along with 60 other doctors who supported him, in a controversial process, Pascal published in 1656 and 1657 - anonymously - his Lettres provinciales (letters to the provinces) , in which he took the argument out of its academic and theological sphere and ridiculed the chess moves of the Jesuits and the Sorbonne in front of an enthusiastic audience.

In this unclear, tense situation, Marguerite Périer's miraculous healing took place on March 24, 1656 . This, a niece of Pascal, is said to have been healed from a fistula of tears that disfigured her face when she touched a thorn, which was shown by a relic dealer in the monastery and which allegedly came from the crown of thorns of Christ. Pascal, whose religious convictions were never free from doubt, authenticated the event personally. The followers of the community around Port-Royal saw these and other miraculous healings in their environment not only as a sign of the authenticity of the relic, but also as confirmation of their convictions. The widely proclaimed healings and their claims in popular religious practice were used and instrumentalized as cause célèbre for secular and ecclesiastical political positioning.

In 1656 Pope Alexander VII confirmed the bull of his predecessor and condemned the five theses again. The following year, the assembly of French clerics decided on a form with a creed containing the condemnation of the five theses, which all believers were to sign. Most of the members of the Port Royal monastery refused, including Antoine Arnauld; whereupon the newly appointed Archbishop of Paris, Hardouin de Péréfixe , excluded them from the sacraments. In 1664 Alexander VII issued a form of similar content in his own name for all clerics and nuns to sign. The resistance continued, even some bishops resisted. Alexander VII announced that a church tribunal would be convened, but this did not come about because of his death.

In 1660 the Port Royal schools were closed. The abbess Angélique, who had written letters in the last years of her life, died in 1661 fearful for her own salvation and that of the nuns entrusted to her. Her sister Agnès survived her by ten years.

It was precisely the establishment of the ecclesiastical court that divided Louis XIV with the Pope, since he did not see his own interests and those of the French Church being taken into account when determining the members. In addition, the support of the Jansenists also grew stronger at court . The new Pope, Clement IX. , backed away from this front and agreed to a compromise on the papal form that allowed the Jansenists to rest for a few years. 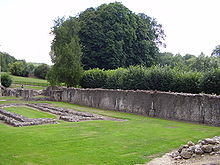 A conflict with the crown broke out again when the king demanded larger income from unoccupied church mortgages, whereupon the Jansenist bishops supported Rome against the king. In 1679 the Port Royal schools were closed again. Antoine Arnauld, who had completed a major work in the preceding years, in which he delimited the Jansenist position against Protestantism and Calvinism, emigrated to Belgium and Holland in 1679, where he died in 1694.

In 1701 the dispute over Jansenism flared up again in the church when the question arose as to whether the sacraments could be administered to a cleric who openly professed Jansenist positions. The church authorities spoke out unanimously against it, the Jansenists resisted, whereupon Clemens XI. 1705 issued the bull Vineam Domini , in which the "respectful silence" of the Jansenists, which had been unofficially agreed for a while, was declared insufficient and the bull was again required to be signed. When the nuns of Port Royal resisted this time too, the monastery was revoked from the monastery by another papal bull. The royal court supported this measure and had the nuns distributed to the surrounding monasteries in autumn 1709. The following year, Port Royal des Champs was destroyed to the ground, and even the dead in the graves were reburied.