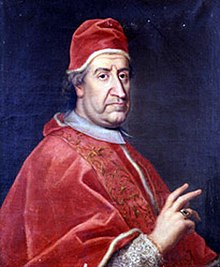 The family of Giovanni Francesco Albani came from an established Albanian minority in Italy, which is where the surname came from. Other cardinals come from this family ( Gian Girolamo Albani , Annibale Albani , Gian Francesco Albani and Giuseppe Albani ).

Giovanni Francesco Albani studied ancient languages ​​and law in Rome . Pope Innocent XI. appointed him secretary of the Breven . On February 13, 1690 he was elevated to cardinal deacon of the titular church Santa Maria in Aquiro by Pope Alexander VIII . In 1692 he was instrumental in the formulation of the Bull Romanum decet Pontificem , which condemned nepotism . Nevertheless, in 1711 he himself appointed a relative cardinal with his nephew Annibale Albani .

On November 23, 1700 Albani was elected as the new Pope. He named himself after the saint of the day, Clement of Rome , as Pope Martin V had done before him .

In the War of the Spanish Succession between France and Austria , he represented the side of the French King Louis XIV , who had helped his grandson, Philip V of Bourbon , to the Spanish throne.

Emperor Joseph I had Parma and Piacenza occupied in 1706 . In 1708 the imperial troops advanced into the Papal States , a ( Comacchiokrieg ) and were approaching the city of Rome. Clement XI. then had to conclude a contract with Emperor Joseph I on January 15, 1709 . In it he committed himself to Charles VI. to recognize the brother of Emperor Joseph I as the rightful King of Spain and to give him the Kingdom of Naples as a fief.

Clement XI. on a silver-plated bronze medal by Ferdinando Sevo around 1706

As expected, Philip V then broke contact with Clement XI. from. The Peace of Rastatt was concluded in 1713/14 , and Philip remained King of Spain after he had renounced the French succession for himself and his descendants.

Regardless of Clemens XI. to take, was the Treaty of Utrecht the Duke Victor Amadeus II. of Savoy , the Kingdom of Sicily awarded. However, this had been a papal fiefdom for over 500 years. When Viktor Amadeus also claimed the ecclesiastical rights of the King of Sicily, Clemens XI. the interdict over Sicily. This dispute came to an end in 1720, when Habsburg acquired the kingdom in exchange for Sardinia.

After Elector Friedrich III. von Brandenburg had himself crowned "King in Prussia " on January 18, 1701 in Königsberg , Clemens XI raised. objection against it, since Prussia was a former Teutonic Order country . For him, Friedrich III stayed. the Margrave of Brandenburg throughout his life .

Clement XI. was buried at his own request in the floor of the choir of St. Peter.

In 1700, Clemens XI. a commission to review the Gregorian calendar. On the occasion of scientific investigations, a meridian was therefore worked into the floor of the Basilica of Santa Maria degli Angeli . In 1701 he founded the Accademia dei Nobili Ecclesiastici .